The Tragedy of The Baby Empire

It felt so old, so unique.
A relic from the past.
There was something about it that appealed so strongly.
And I loved it.
I never realised that The Baby Empire was such a good typewriter.
I had it for a few hours.
I didn't even type a whole page with it, but what I did type was amazing.
I brought it back from being a rusted, completely unusable typewriter to one working fine.
And then the 374th Baby Empire ever made broke. Right in front of me. All my work was lost.
The clock motor broke. I broke it.
I didn't even take a picture of it after I'd cleaned it up. But as soon as it broke, I took it apart and tried to fix it but there was nothing I could do. So the pictures you see are not the working, cleaned up, beautiful typewriter I knew.
I thought I was so lucky, and so clever.
I dumped my heart into it.
Not only was it special and so very old, it typed amazingly.
It won't any more.
And it hurts. 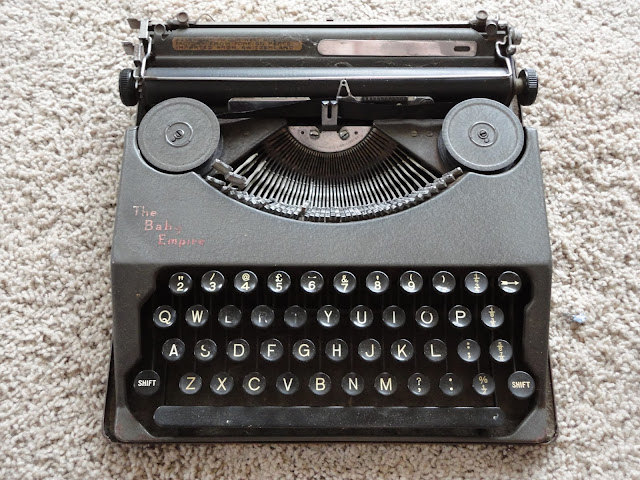 You don't have to say anything. I just had to get that out. You know how that sometimes helps you get over it. I'm getting over it. I'm still really sad, though. I was looking forward to taking this typewriter with me as my go-to travelling typewriter. The spring in the motor cracked near the end. I suppose if I could somehow get it open it might be fixable? I don't really know.
Posted by x over it at 02:43