Erika portables made after WWII have always been a bit confusing to figure out. Hopefully this 2-part series helps clear things up as I compare model-by-model and introduce a long-needed full list of serial numbers online. Using the data in Die Entwicklung der ehemaligen DDR-Schreibmaschinen-Produktion, I have compiled a comprehensive serial number list that spans the entire history of Erika typewriters and fills in a number of gaps and fixes inaccuracies in the old list from tw-db. The new complete listing, almost finished, will soon be found on the Typewriter Database.

I don't actually currently own any Erikas from the era covered in Part 1, although I have owned two examples in the past, though neither was properly working and I've since parted with both. My only Erika currently is a Robotron Erika from the 1980s, but I hope to soon add others. :)

All of the pictures in this post have been found on the internet and come from the collections of Tilman Elster, Richard Polt, Rob Messenger, Georg Sommeregger, Vilhelm Dromberg, myself, and other typospherians, as well as current and ended online auctions, and are presented purely as examples essential to this post. No infringement intended.

All typewriters with serial numbers indicated have been dated using the list at the bottom of the post. Regarding the numbers; there are a number of different sources that all slightly contradict each other. The source I am using is the newest and most complete one available.

The old Erika models 5, 6, M, and S were produced by Seidel & Naumann unchanged for some time after WWII, with production ending in 1949 (except for in 1948 for Model S) with the creation of Seidel & Naumann VEB Dresden by the new East German government.

Erika Model 8, the first new model introduced after WWII, is easily confused with the more common Model 9. It is distinguished by having a differently-shaped ribbon cover where the protrusion around the typebars begins at the edge of the ribbon cover, rather than in slightly. The later, more common version of the 8's ribbon cover is also more rounded than the 9's and has a tabulator. It seems that the 8 never had plastic keys.

When introduced, the 8 had a more boxy ribbon cover and no chrome stripe. Most of the Model 8s you will see have a more attractive rounded cover with a chrome stripe. If anybody has any more information on the Model 8, I'd be very interested to know. 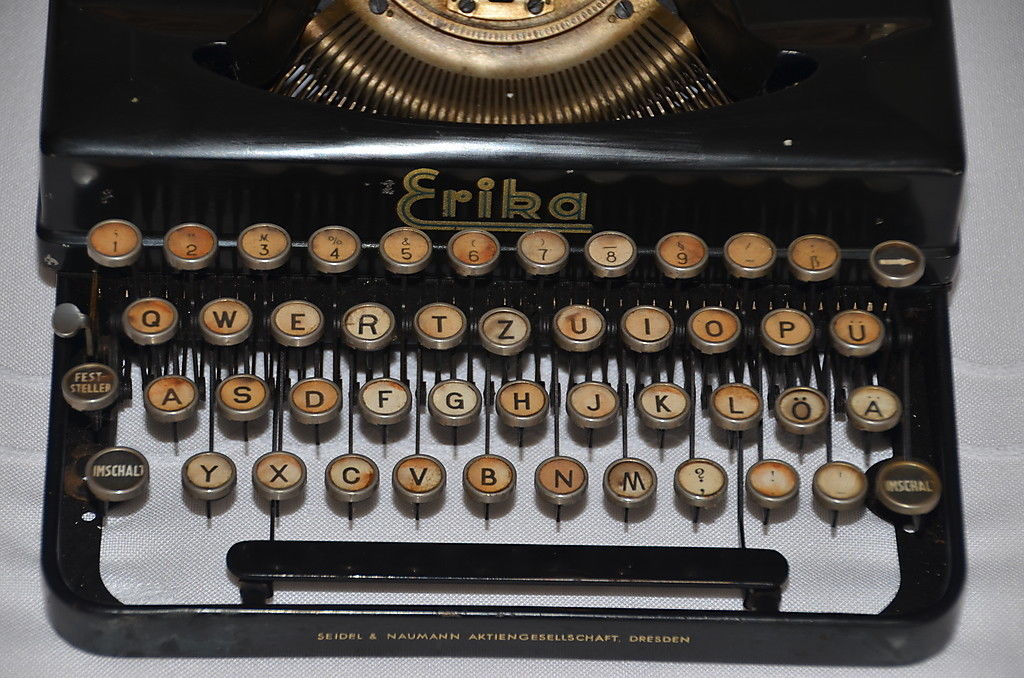 You will note that the S&N emblem is still present on the ribbon covers of the Model 8 and the earliest Model 9s. Below the spacebar you can see "Seidel & Naumann VEB Dresden" which would quickly be known only as VEB Dresden. "VEB" stands for Volkseigener Betrieb (roughly, People's Enterprise).

The following photos show the numerous variations I have found. None have a tabulator. They all have the older style black, squared-off case. By the end of 1950, the S&N decal was dropped. In 1952, glass keys were replaced with plastic keys. 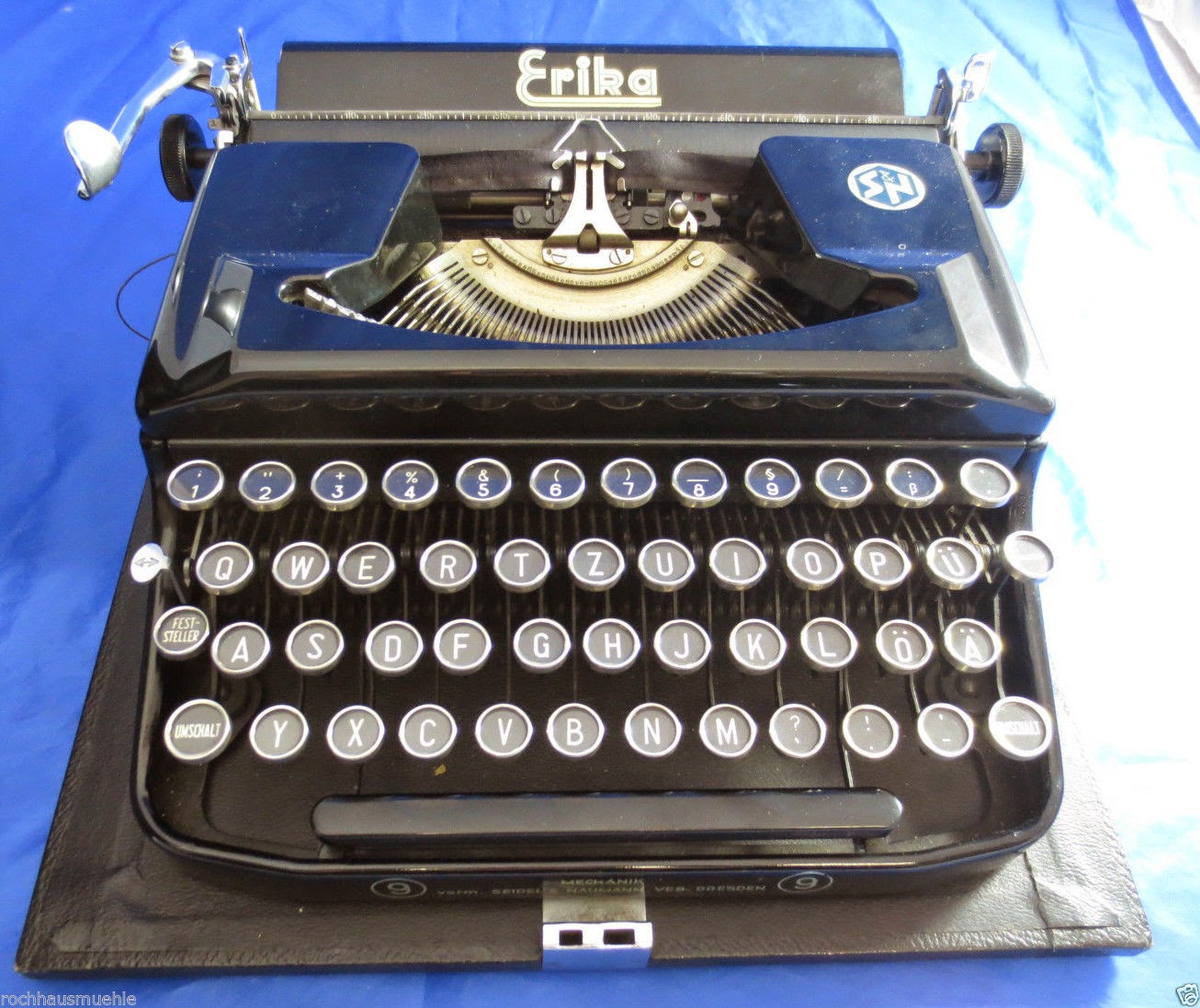 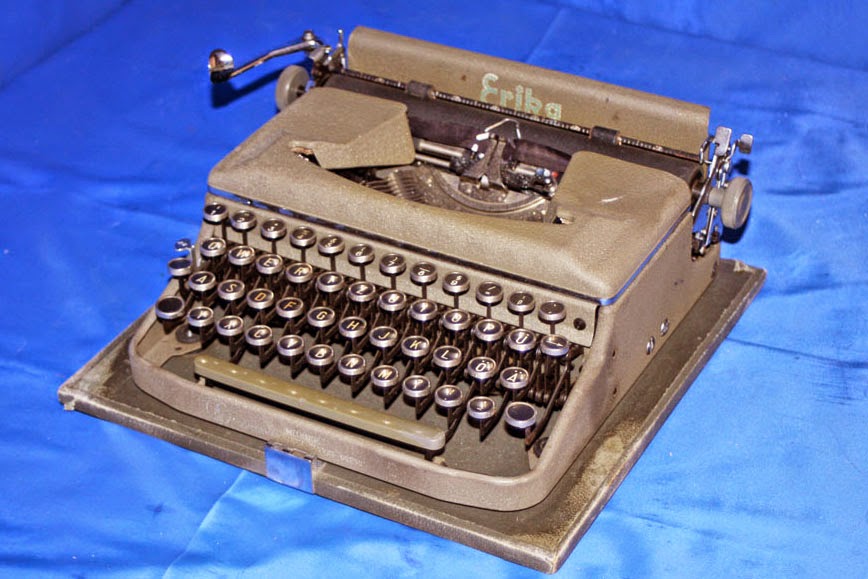 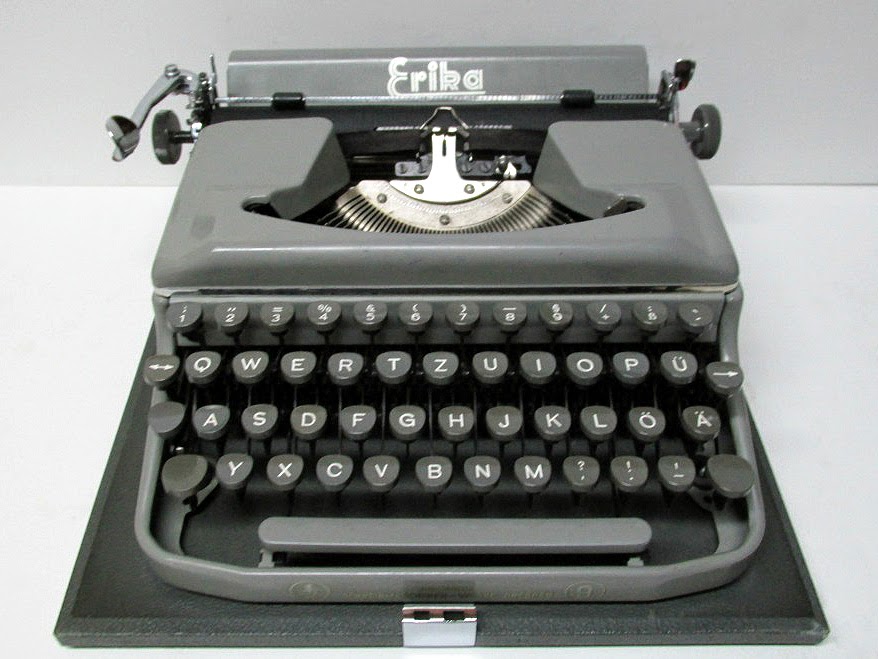 The Erika 9 was also made as a Bijou in this lovely green color, using the export name that Seidell & Naumann used before the war.

Model 11 replaced Models 8 and 9 in 1954, therefore it was never manufactured by Seidel & Naumann. It is the last design that follows the lines of the Model 8. You can easily tell the difference by looking at the ribbon cover—the raised section around the typebars is gone, the chrome stripe (always present) is actually two separate pieces that do not meet in the middle, and the Erika logo is now located where the S&N logo once was.

At some point in the Model 11 line, the newer style rounded case was introduced. It seems like the paint variations in color and texture on the late-40s, early-50s Erikas were available at the same time, rather than one after the other. 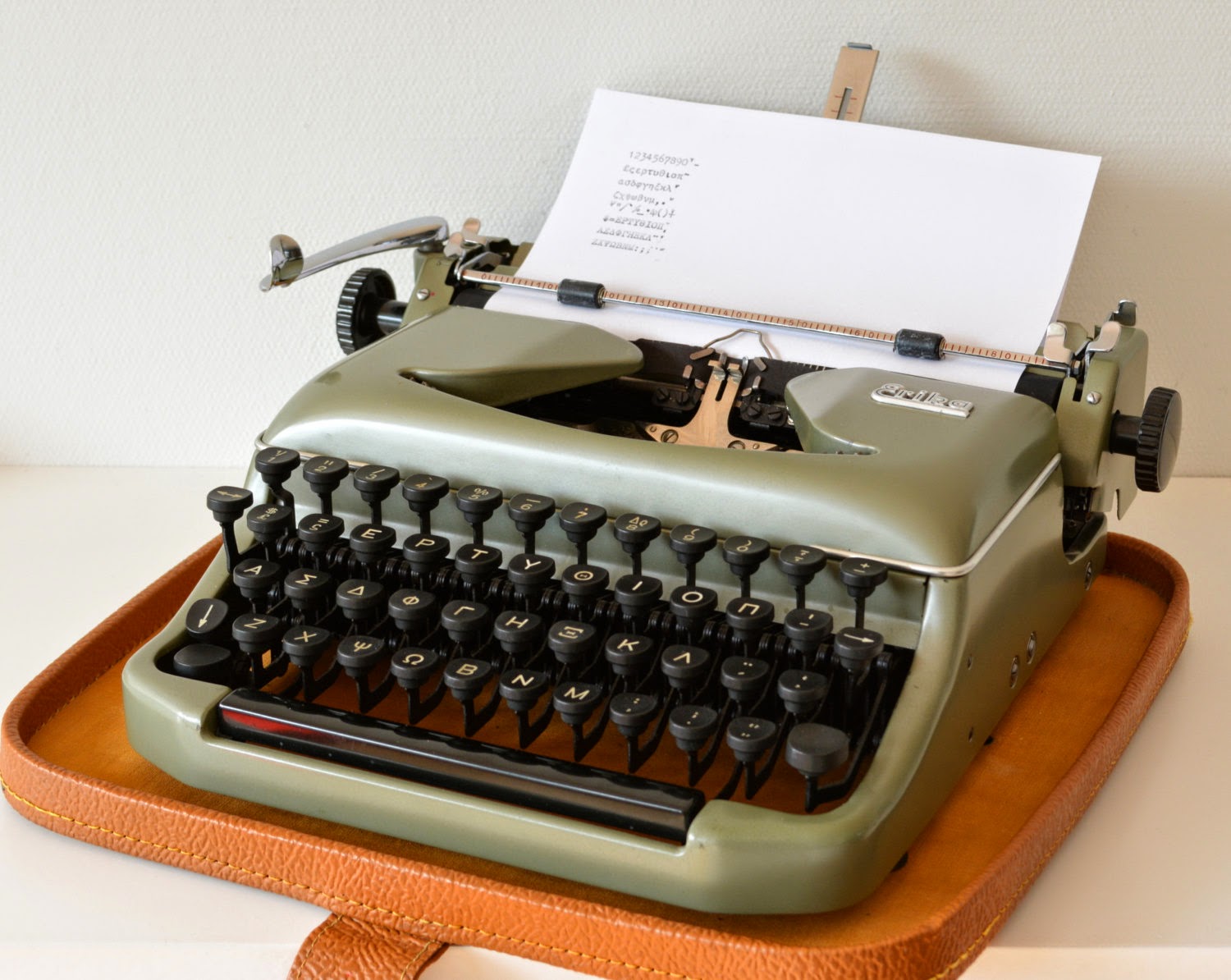 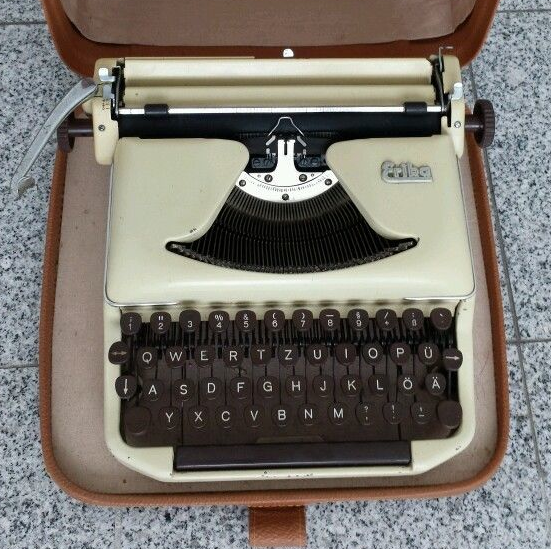 The 10 is the model that most people think about when they think of post-WWII Erikas. They were the longest-lived model before Robotron, and some varieties very closely resemble the Model 12, to be clarified below.

As with the 11, the Model 10 always has plastic keys. The earliest Model 10s (1952-53) have larger Erika logos on the ribbon cover, painted dots indicating the ribbon color selector, and a slightly different segment. At the beginning of the line, the old style black case was used, but at some point it was changed to a rounded case very similar to the Erika 11's with a leather texture. I have also seen a hard case that strongly resembles the case used by Torpedo in the late 50s and early 60s. 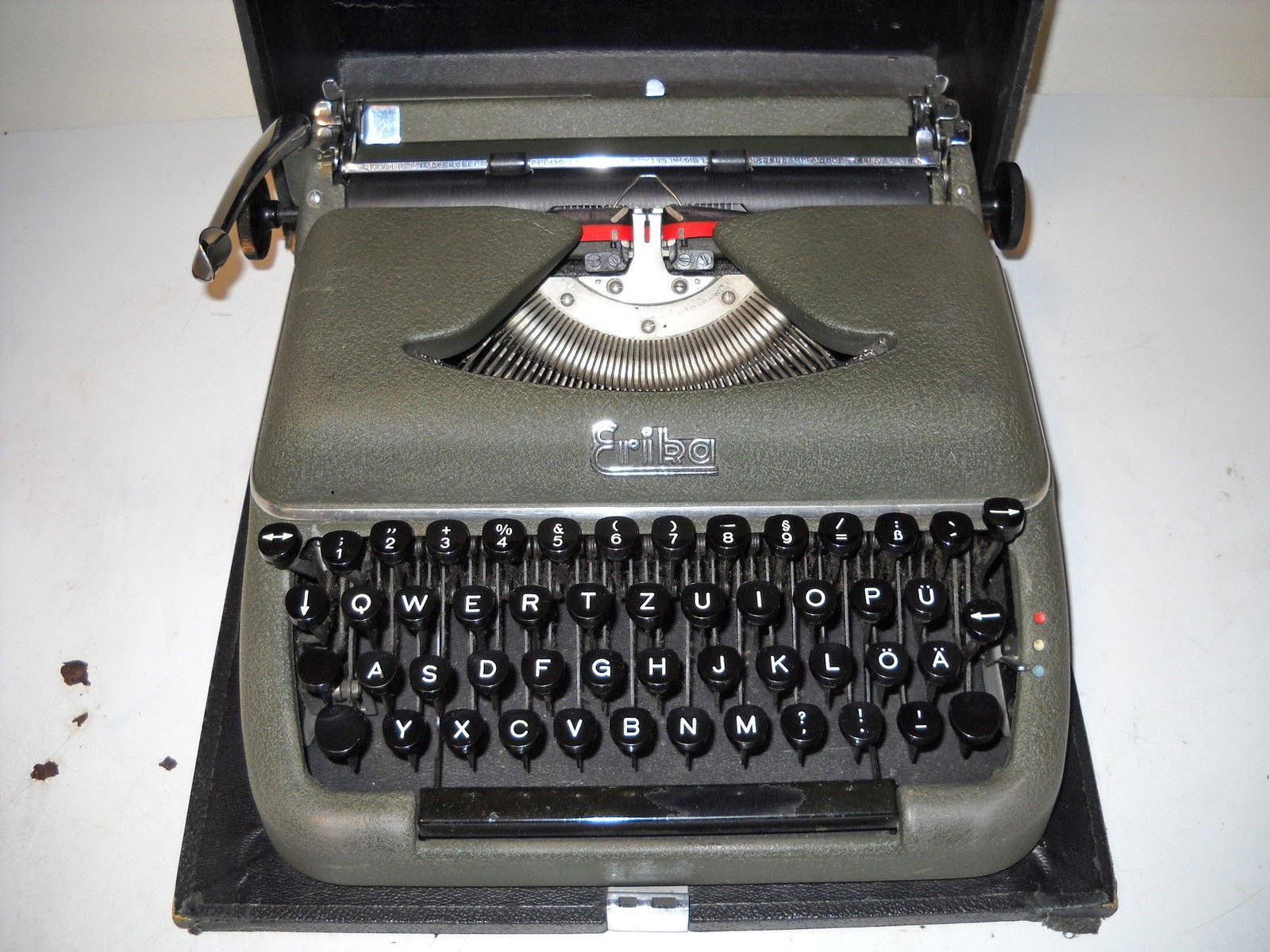 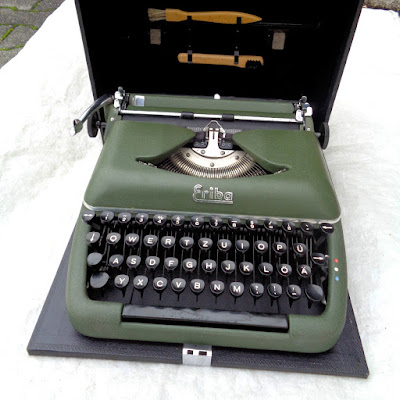 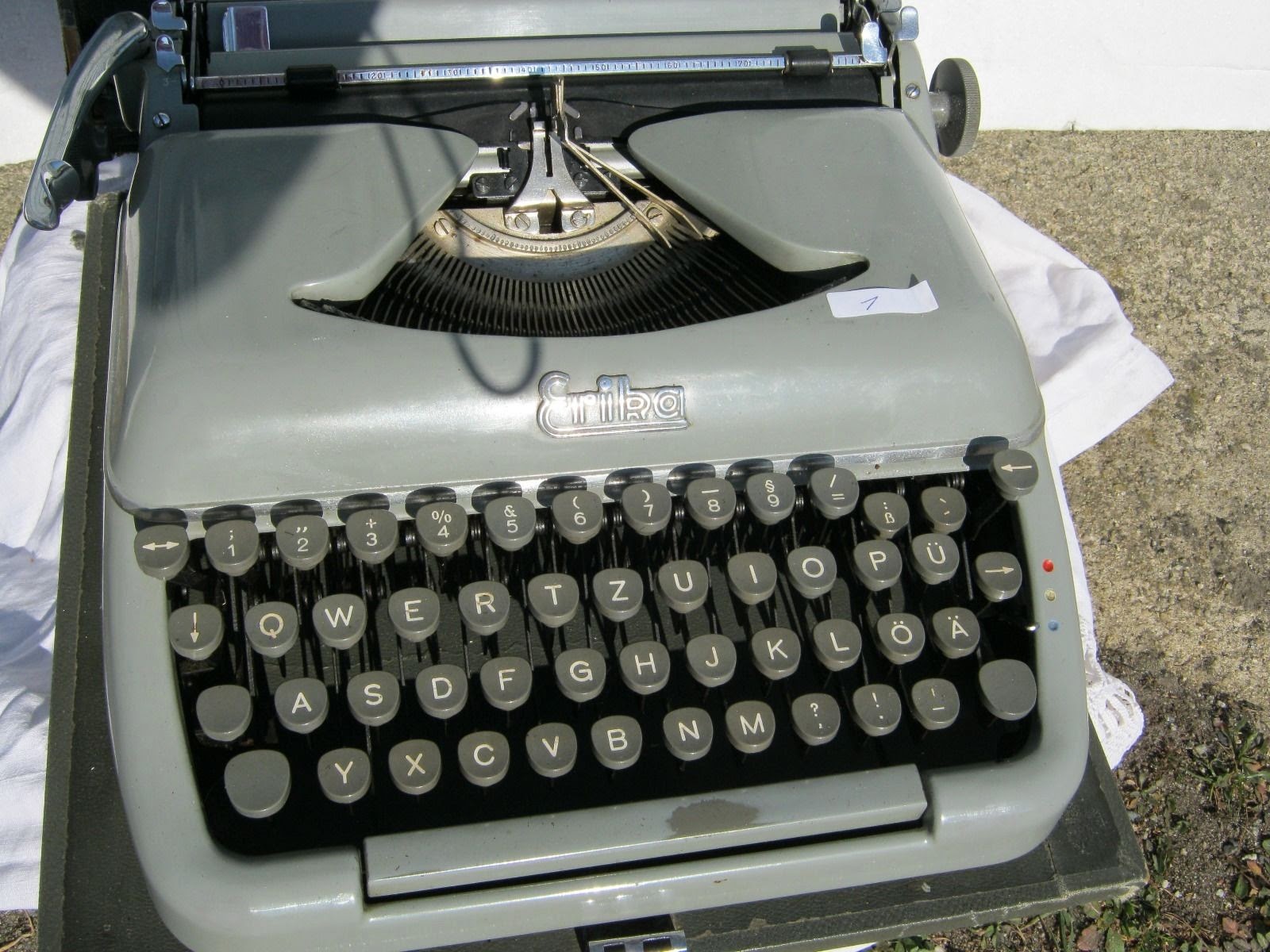 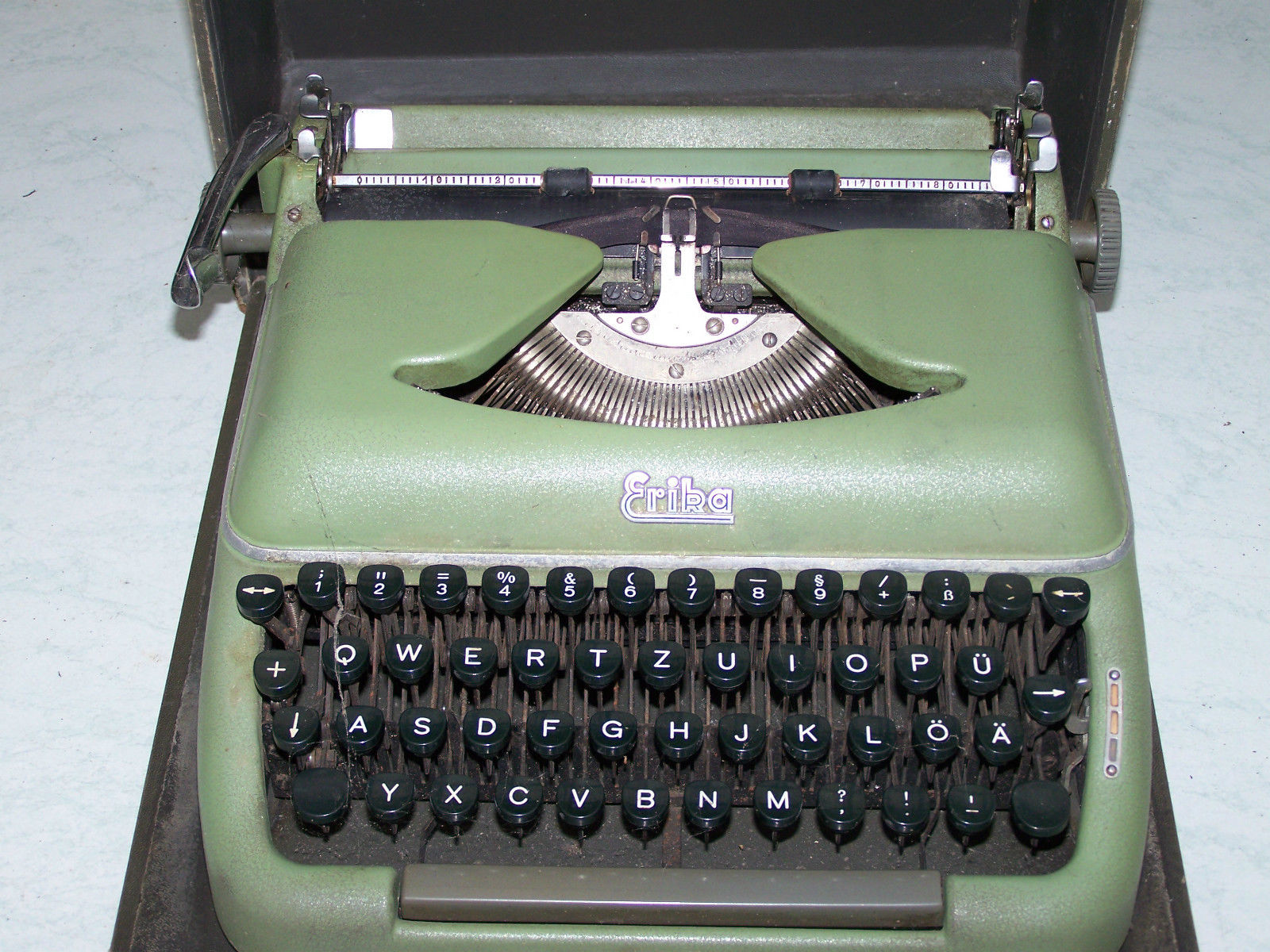 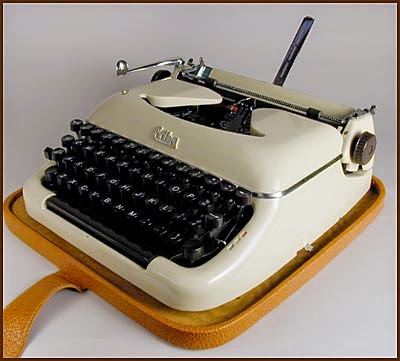 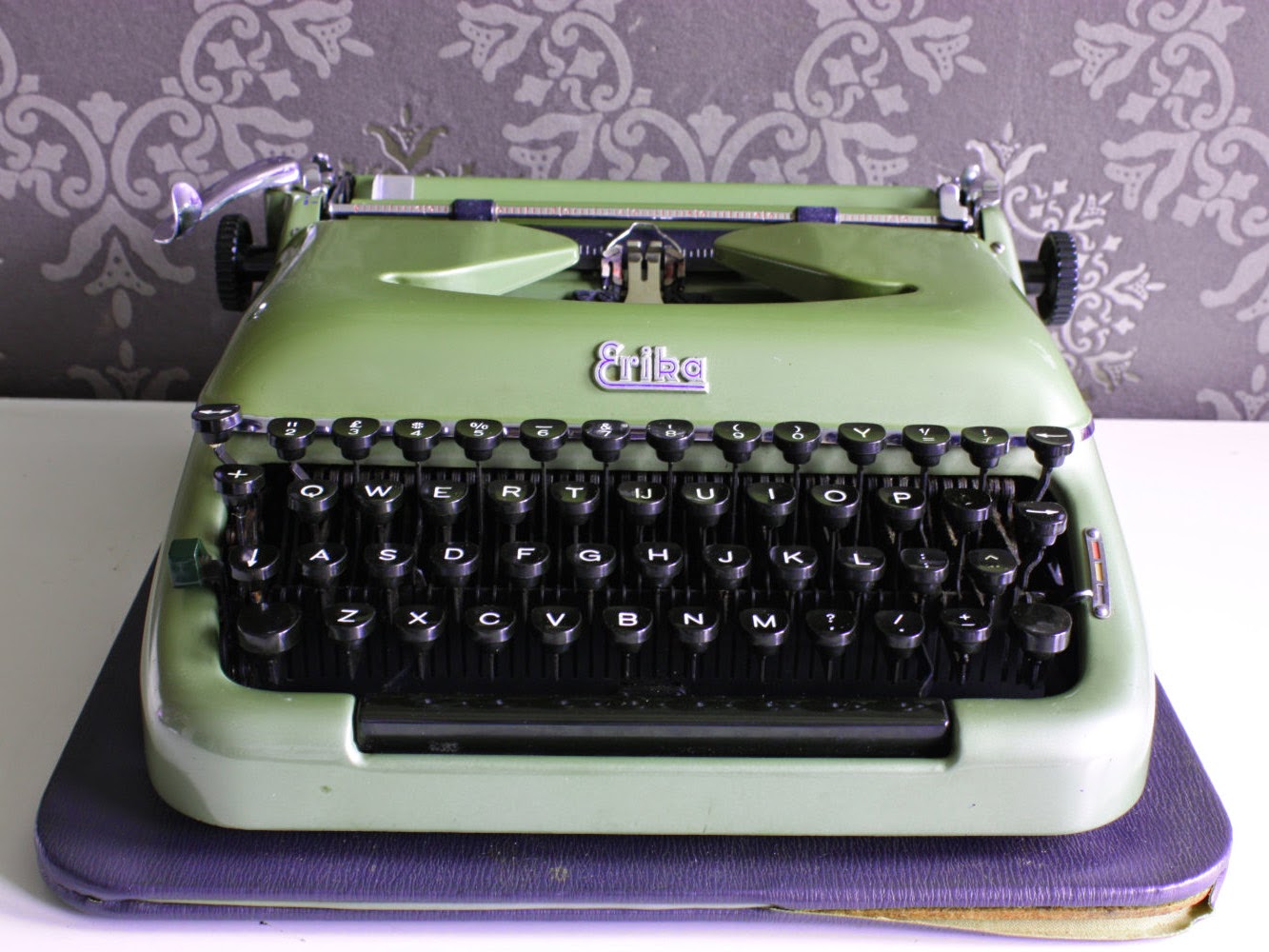 Bijou was an export name used in many countries, including Finland. The Irene Super was sold in West Germany by Quelle. In the United States, the Aztec brand was used. I own a Continental that is actually an Erika 10, the only example I've ever seen of the Conti name applied to another typewriter.

The Oriental below has a decal in the same style as the Continental above. It also has a separate decal in Arabic, but the keyboard is Polish.

Late 1959, the Erika 10 underwent a restyling. The chrome stripe around the ribbon cover was removed and the Erika logo was changed and moved to the right side. (although a few 10s continued to have the old style logo throughout 1960, and others retained the chrome stripe) Quite a few attractive duotone color schemes were introduced. All have the newer style leather texture or hard cases. Originally the new logo had red lettering, but between 1960 and 1961 that changed to reflect the color scheme of the typewriter. 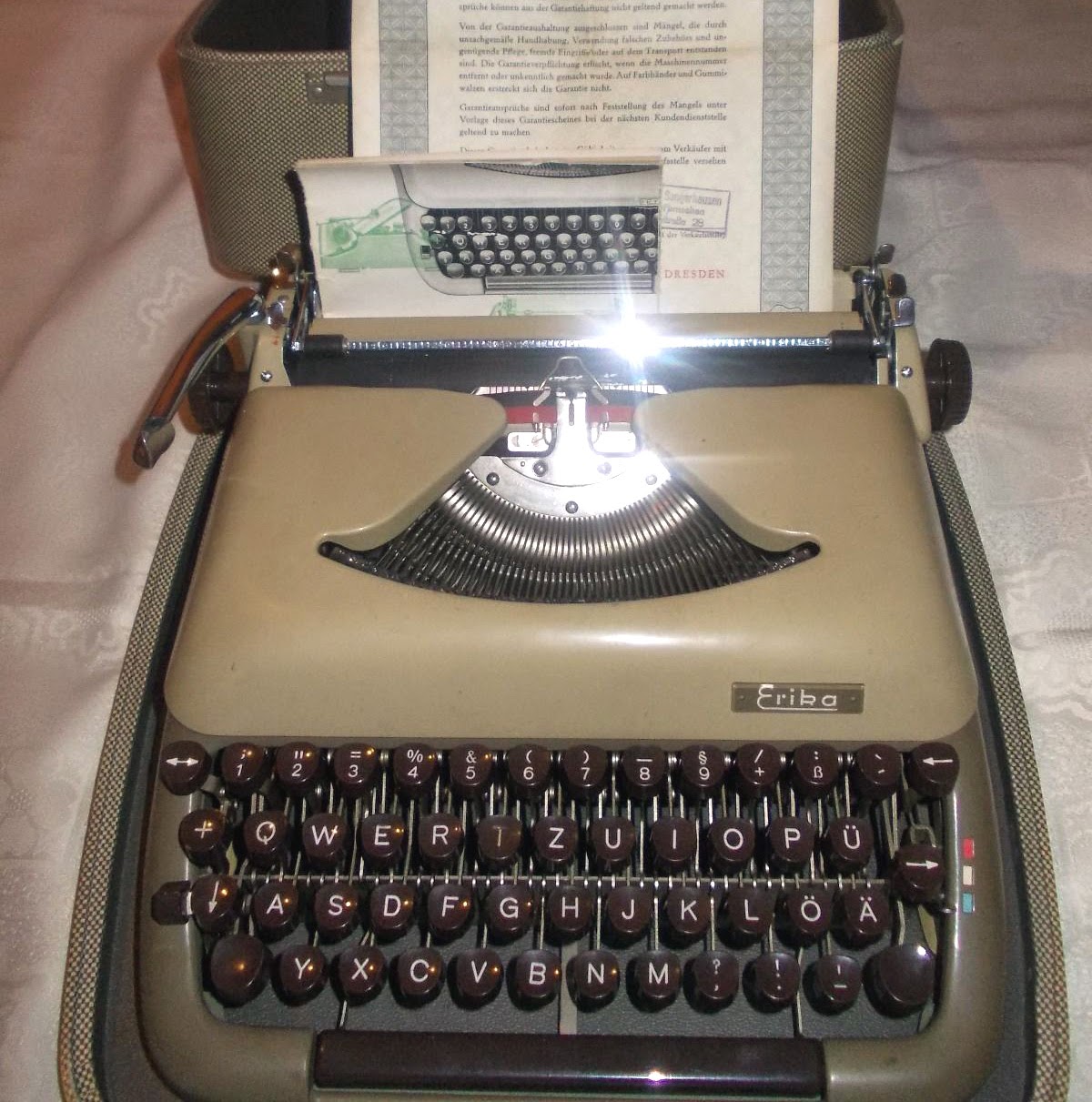 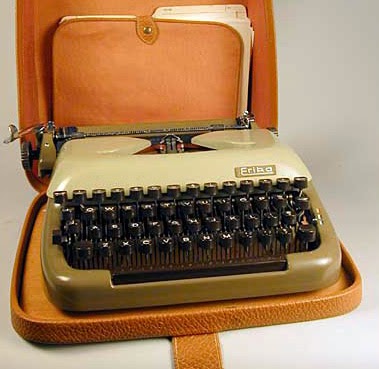 Alternate brands of the late Erika 10.

This Erika 10 was rebranded as an Optima for sale in the US, and the one below (Optima Humber 88) was rebranded for sale in Canada. Production of the actual Olympia-descended Optima portable had ceased in 1961, so this likely dates from 1961 to 1963, end of Model 10 production.

The gradual changes introduced in the Erika 10 line were not always straightforward, even the new plastic logo was not consistently adopted by all 10s at one point.

The Model 12 is often confused for the Model 10. The two look very similar, but there is a surefire way to determine whether it's a 10 or a 12—look at the keys. There are two fewer keys on the Model 12's top row than on the Model 10. This was introduced around the same time as the Model 10 restyling, and is essentially a stripped-down version of the 10.

The 12 appears to only have the flatter style keytops, that are of an earlier design, while the late 10 often (but not always) has thicker keytops seen on other later models, such as the 14/15. They are never found with a chrome stripe around the ribbon cover. 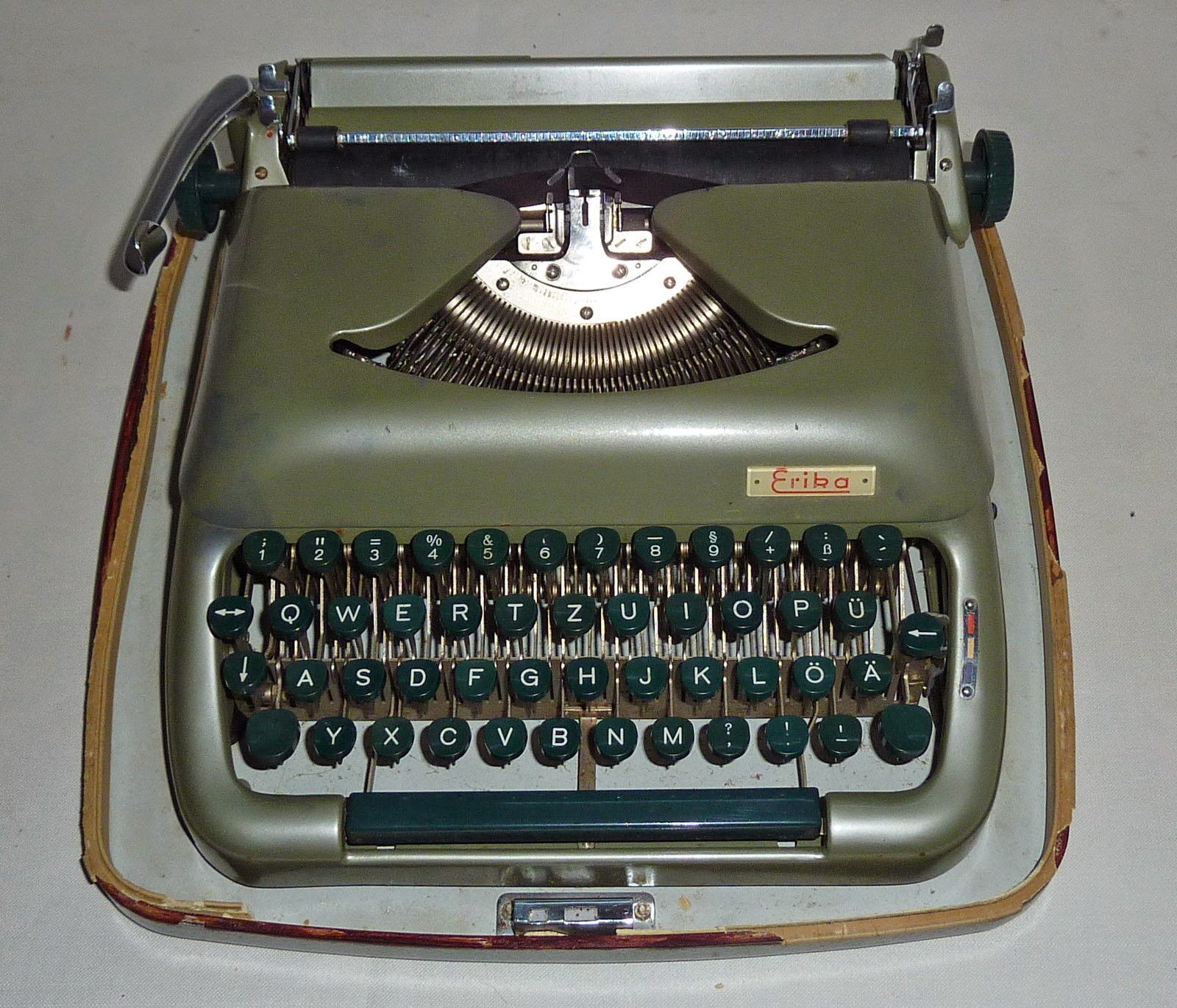 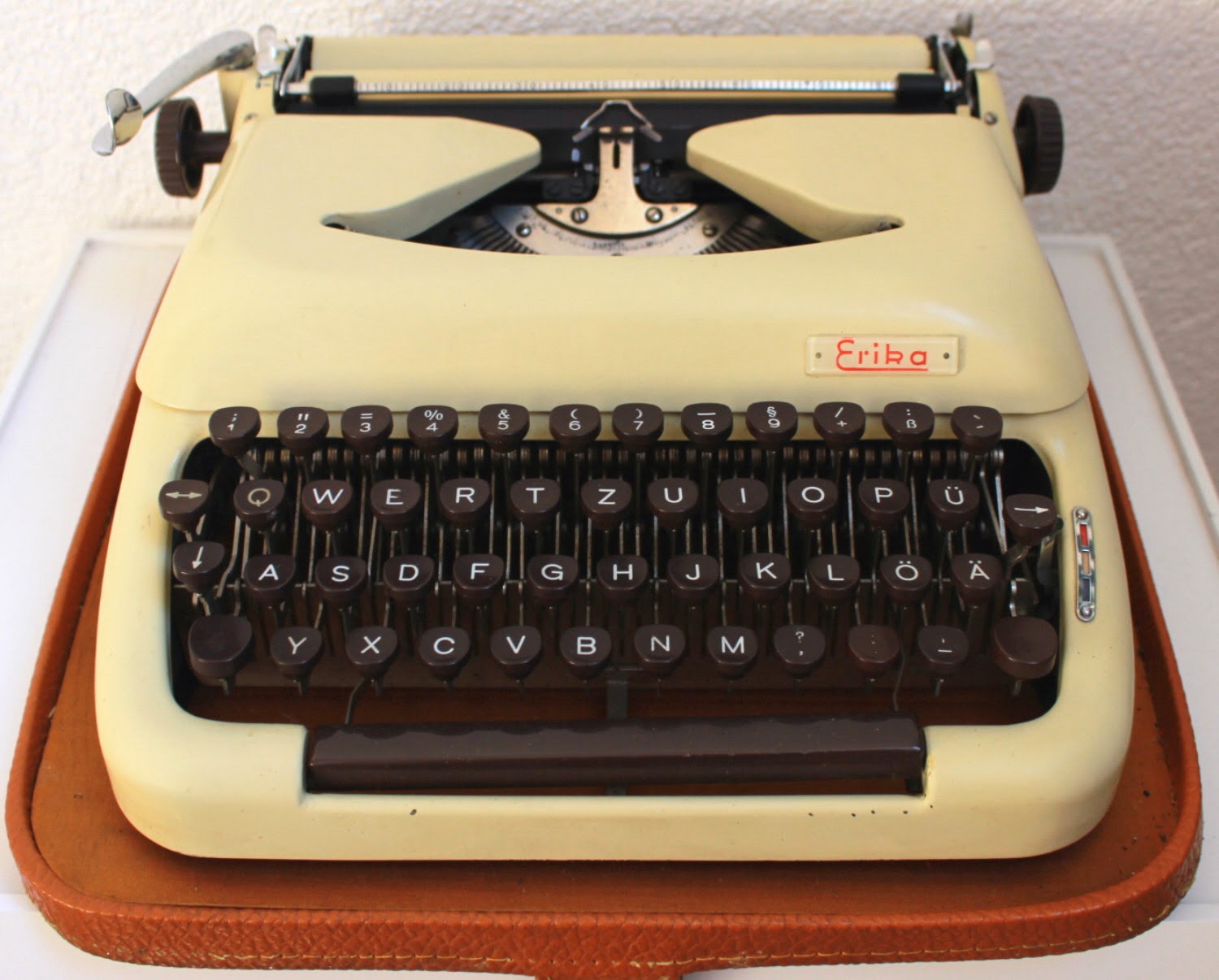 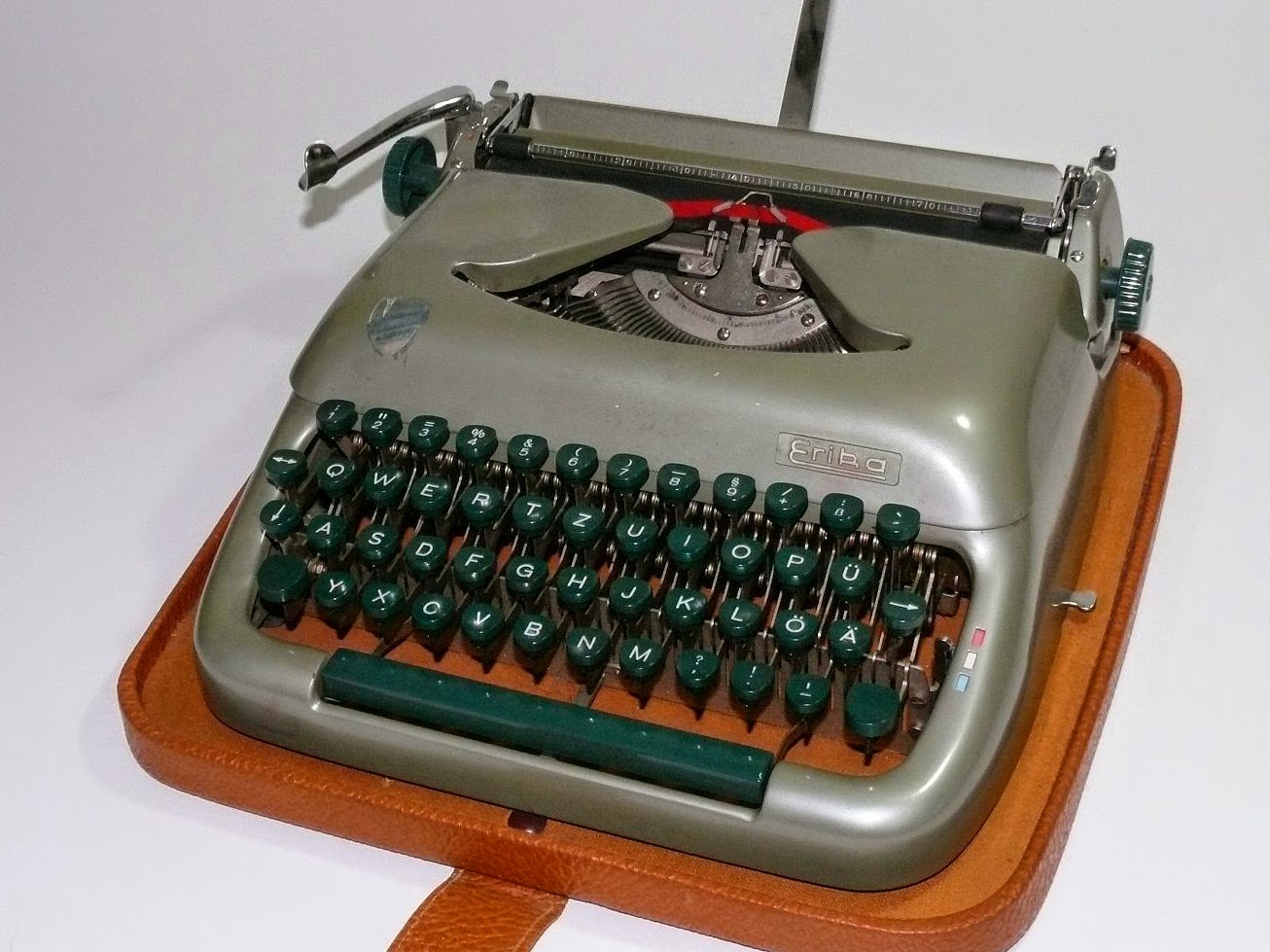 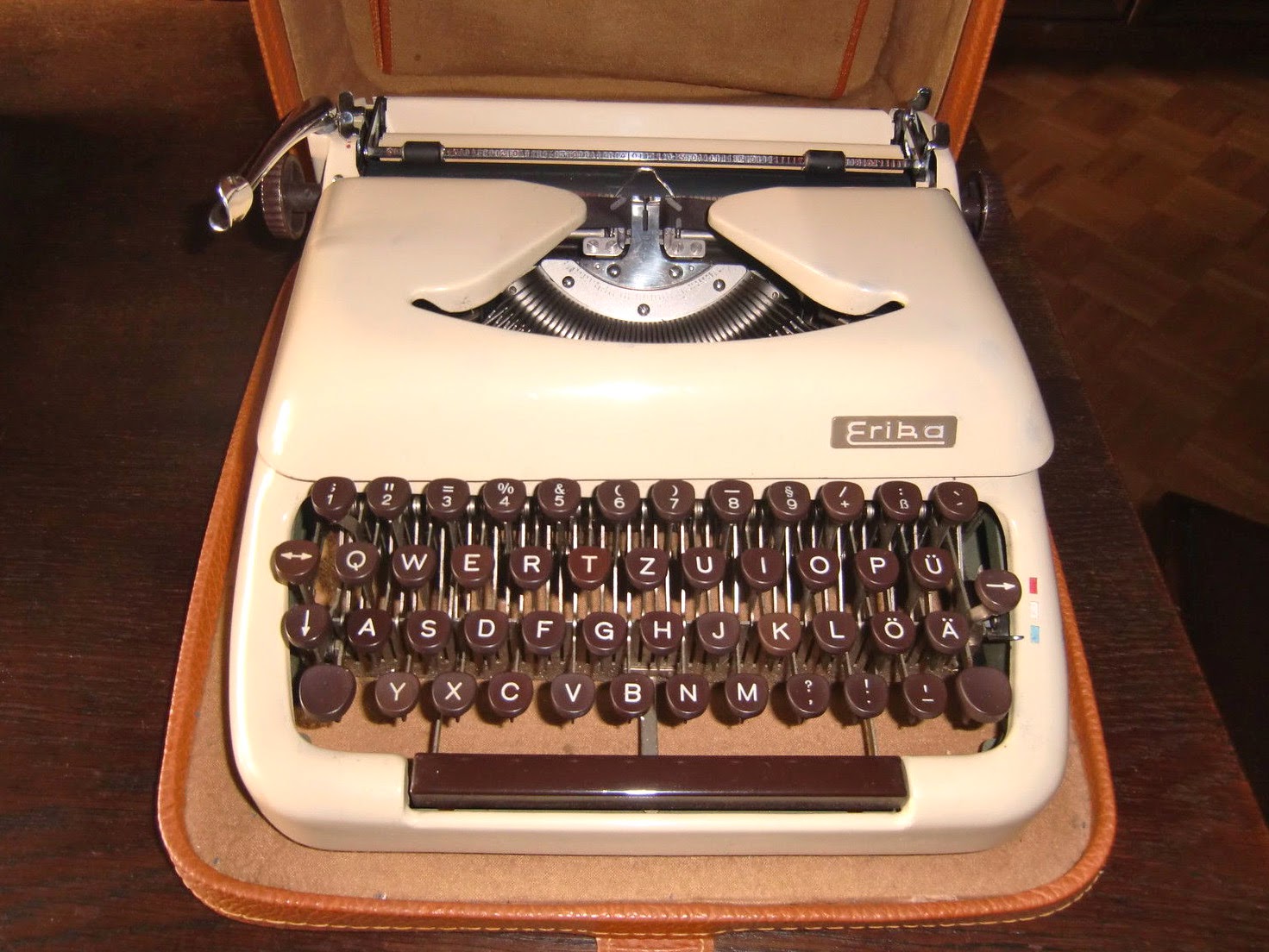 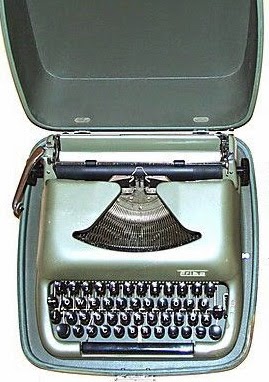 I have seen this rebranded as an Ursula, which appears to have been a brand used by Kaufhof in West Germany. The orange logo matches the striking case. The first Ursula, serial number 3006797, actually has a higher number than records show for model 12 (which allegedly ended at 3002800).

This Aztec 700 is interesting because it has a German keyboard—most others known were exported to the US. It's also odd because usually a Model 12 Aztec is called a 500. Below it is an Aztec 500 with German keyboard.

Thankfully, the confusion of 10 and 12 ends in 1963. From here on, the stripped-down versions of Erikas were released and given their own model number at the same time as the more-featured version. The first instance of this is the Model 14/15.

The Model 14 is essentially a 10 in a plastic housing, although all examples I have found seem to lack a color selector. There are no important changes to the mechanical design. The 14/15 appears to use the softer leatherette texture case of the Model 10. By the end of the 14/15 run, the case style has changed again to the black with red lining that was used for many years afterwards. 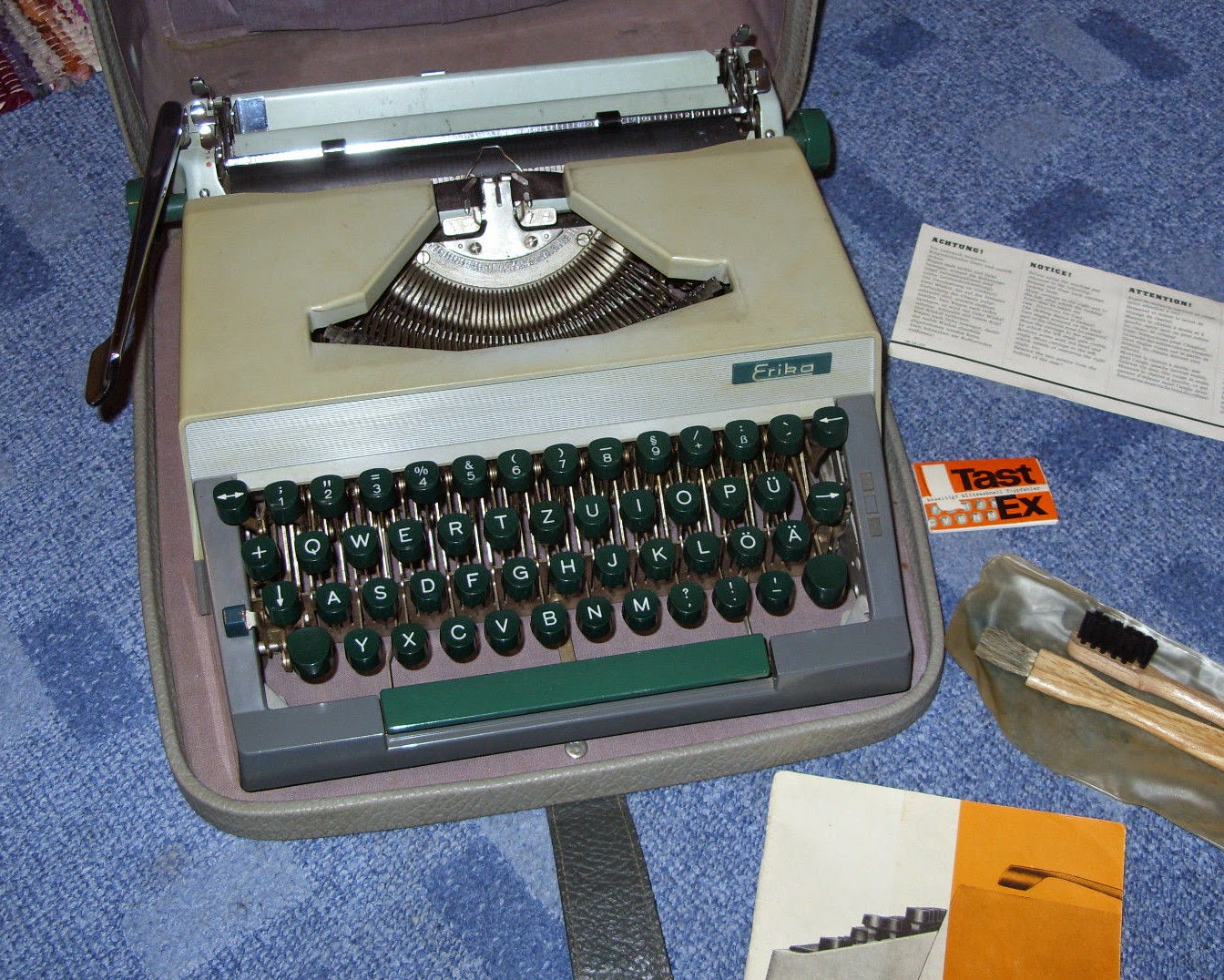 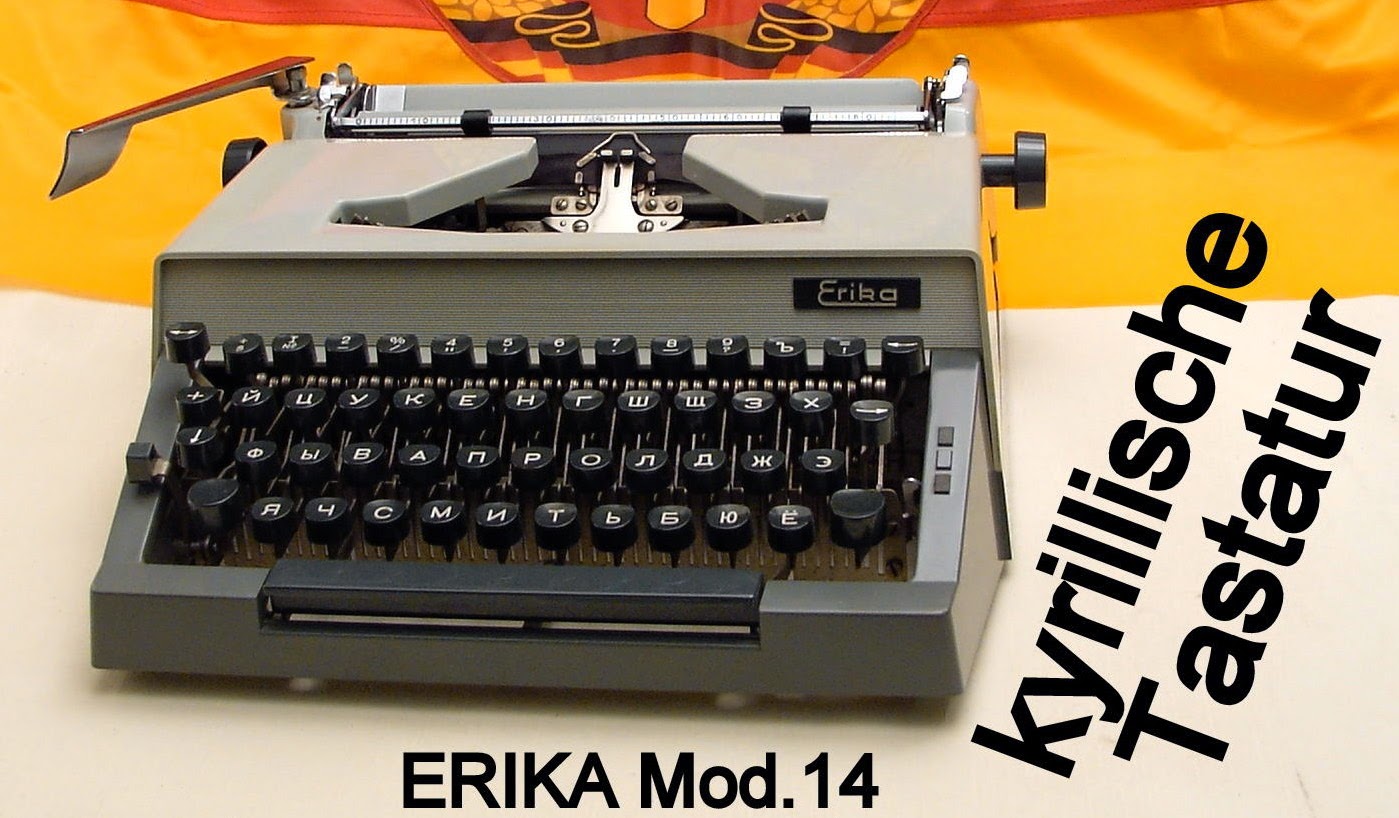 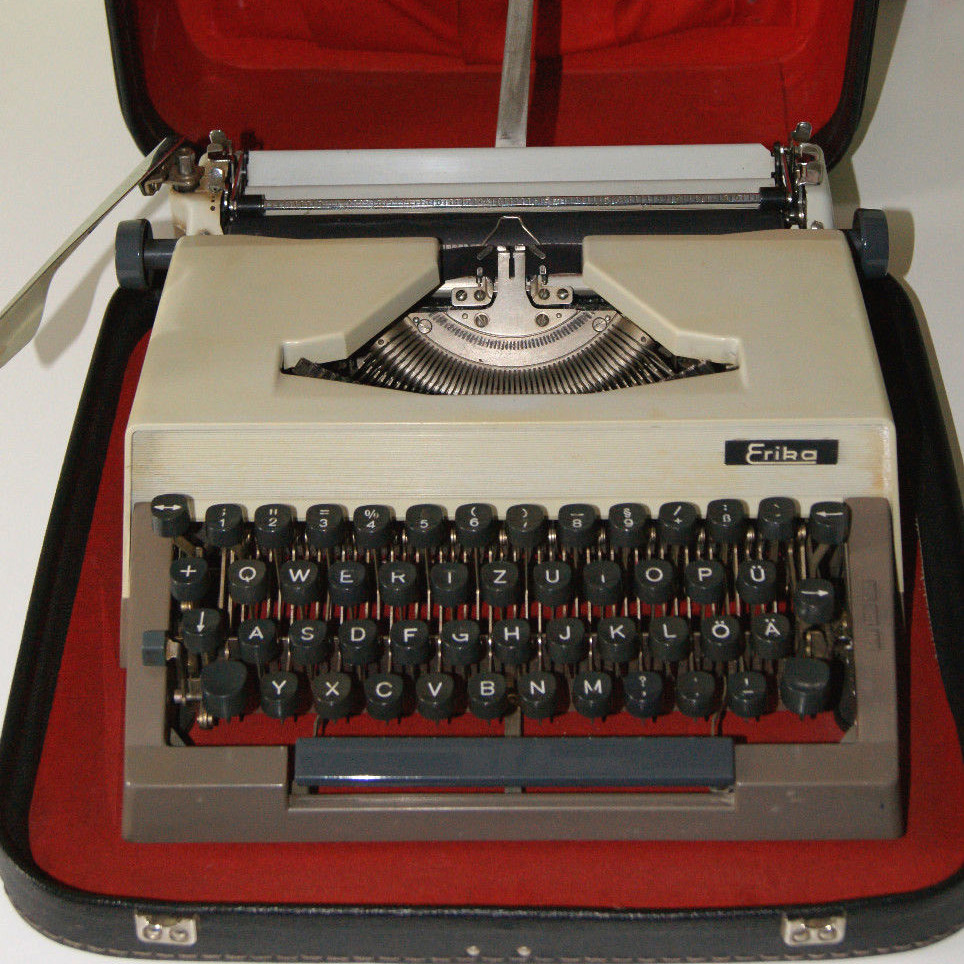 It was also exported as the Aztec 14. The Russian-keyboard red Aztec 14 has a color selector unlike all other Erika 14s I have seen. I'm not sure if the red is original or not, but it's owned by Robert Messenger so he may have repainted it. 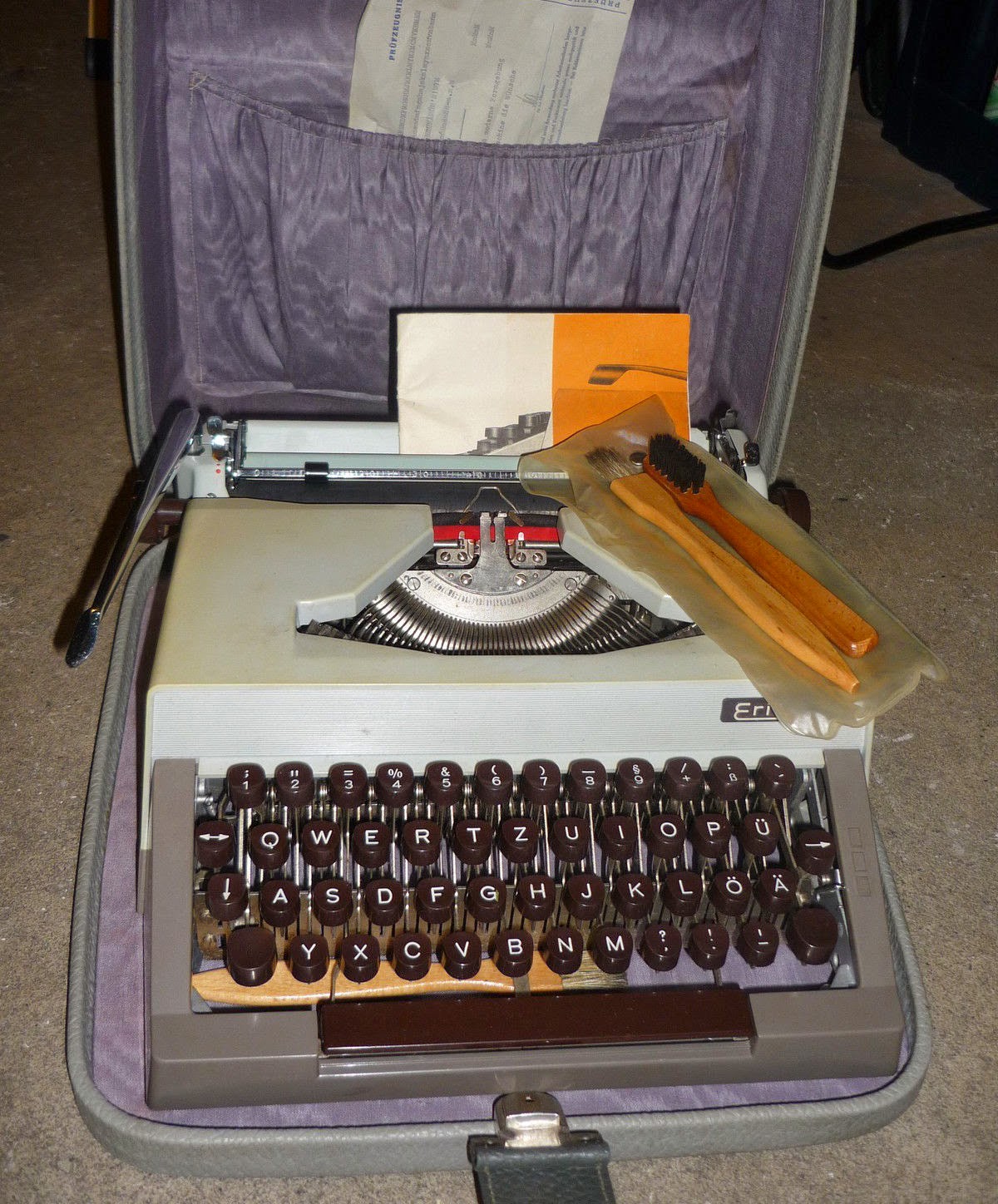 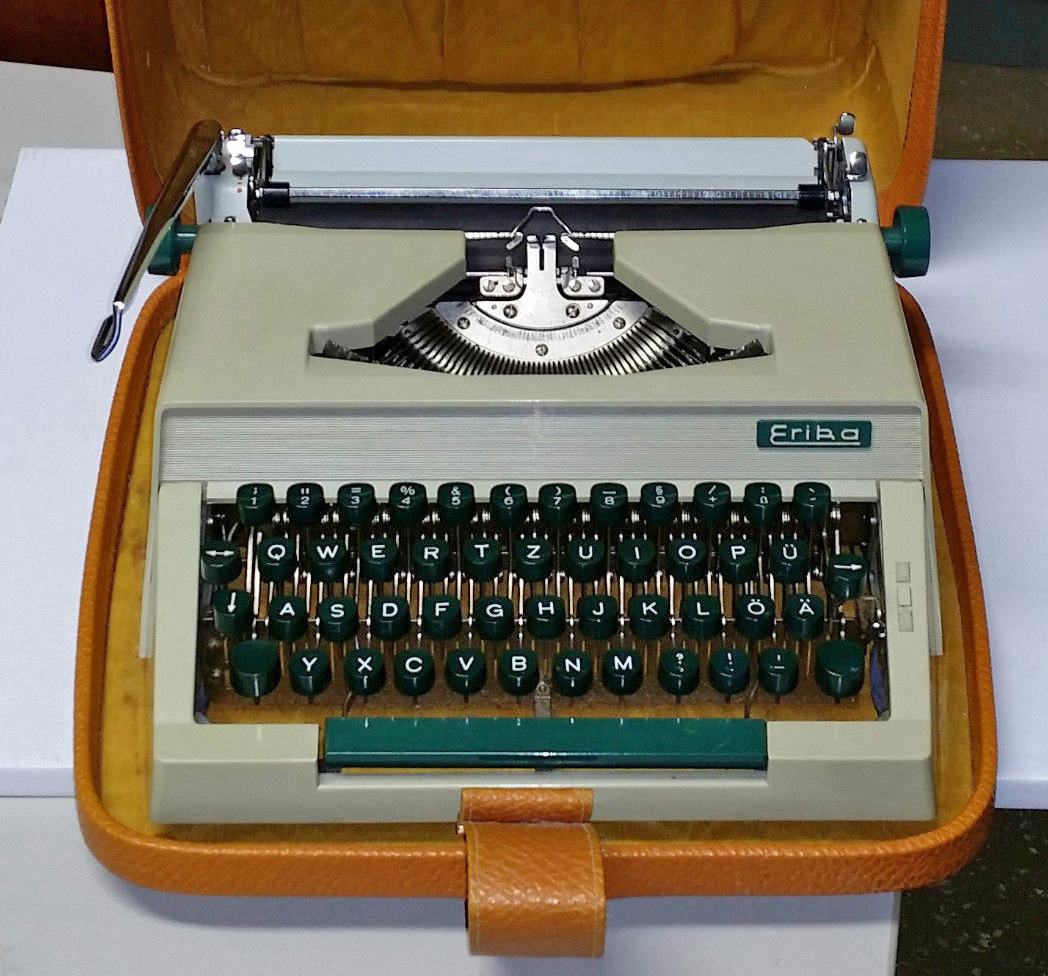 A rebranded Optima version was sold in Finland, and an Ursula for West Germany.

Model 20 was introduced around the same time as Model 12 and had segment shifting. The Model 14/15 introduced after the 20 was discontinued still used the old carriage shift design. Not much is known about the Model 20, but thanks to Piotr for finding this photo. The 20 is a completely different typewriter compared to the 10, and seems like it is a continuation in the spirit of the Modell M. If anybody has any more information on the Model 20, I'd be very interested to know.

I've been made aware of three Erika 20s, all with Russian keyboards (looks like we know why this already uncommon model is so hard to find with a German keyboard! Many were exported to the USSR.) It can be seen that the style of the Erika logo changed between serial numbers 4000214 and 2002249. The burgundy model 20 is probably a repaint, originally silvergreen. 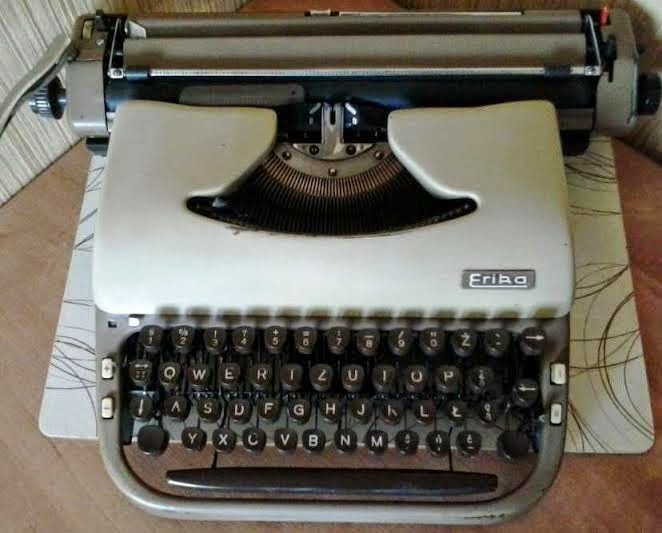 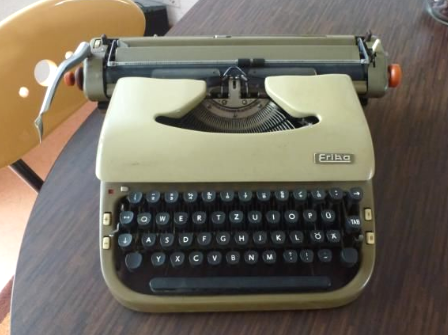 This one has had the keys and carriage knobs replaced.


All of the typewriters you have seen on this page are carriage-shifted (except for Model 20) and represent the first major stage of Erika production in the DDR. The next part begins with the introduction of the first segment-shift portables in 1965 and how all typewriter manufacturers in the DDR were eventually consolidated into Robotron. (Although by 1965, Erika was the only portable typewriter manufacturer left, with the possible exception of Rheinmetalls which may have been produced until 1966, rather than 1962 as it is commonly thought)

Thanks especially to Georg Sommeregger, Ted Munk, and Piotr Trumpiel for their excellent help.