When I was working on my post about post-war Rheinmetalls, Using the data in Die Entwicklung der ehemaligen DDR-Schreibmaschinen-Produktion I also updated the Optima serial numbers on the Typewriter Database, which before had been quite lacking. Now they are complete for the entire portable line, and I added the numbers for the earlier standards as well. In this article I will be focusing only on the portable Optimas.


All of the pictures in this post have been found on the internet and come from the collections of myself, and other typospherians, as well as current and ended online auctions, and are presented purely as examples essential to this post. No infringement intended.

All typewriters with serial numbers indicated have been dated using the list at the bottom of the post.

This post will be edited when new information becomes available, especially with model examples. If you have an example with a serial number and photo, or anything else useful, please let me know!

The Olympia factory was located in the Soviet occupation zone at the end of WWII, but a new factory was set up in Wilhelmshaven, in the British zone. The Olympia name was used by both the eastern and western factories until the formation of East Germany when an international court ruling gave Wilhelmshaven the rights to the brand name. In Erfurt, Optima was used by VEB Optima Büromaschinenwerk. I won't repeat any more history here; for more information see this post by Robert Messenger.

The first portable produced by VEB Optima Büromaschinenwerk was an Olympia Elite, changed only in name. An excellent comparison between an older Olympia and later Optima Elite on Ken Coghlan's Swinging Typebars. It was only produced as a full-featured machine with a keyset tabulator.

Based on seeing new serial numbers, I am going to approach this slightly differently from how I did when I originally wrote this. I believe that the first machine manufactured at the Wilhelmshaven Olympia factory was a "proto-SM1" branded as Orbis. Therefore, all glossy Olympias built after serial number 600956, which was previously thought to be the beginning of the Optima brand, are actually Optimas built in the Erfurt factory. Machines built up to about 700000 can be found as Optima, Erfurt, or without a brand at all.

The two "Olympia"s below fit into this description. One is an Elite, another is one of the very last Progress models ever made.

The typewriter below was built right before the Optima labels was introduced, it's just an Elite with the Olympia decal removed and a "Made in Germany" decal added. 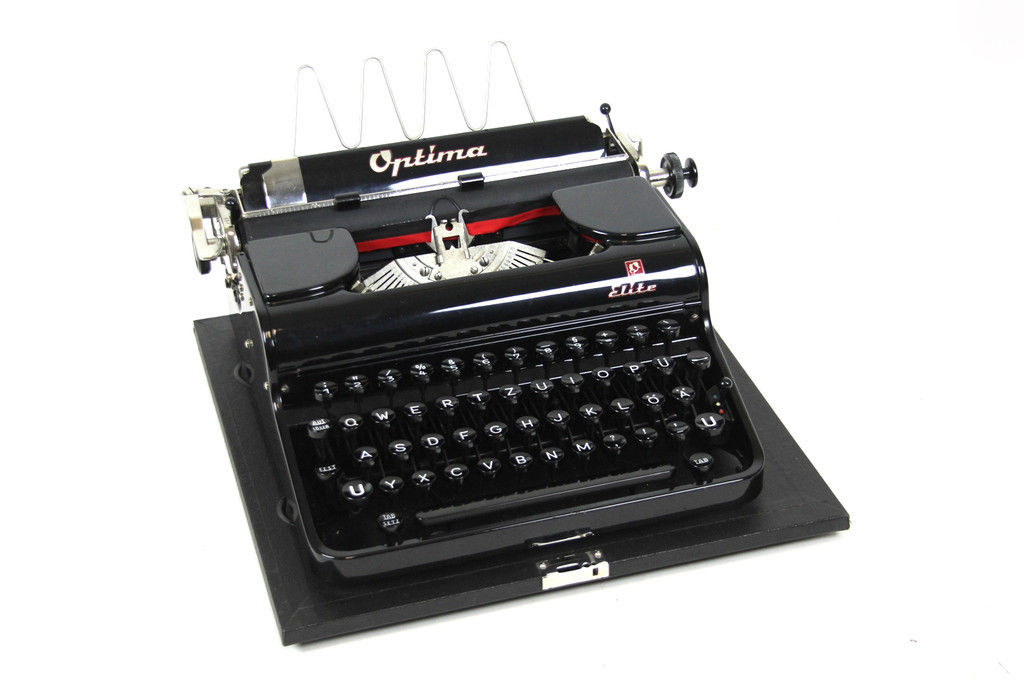 This Optima Elite is the earliest one I have seen to bear the Optima name. Notice the front decal is different from the ones usually found. 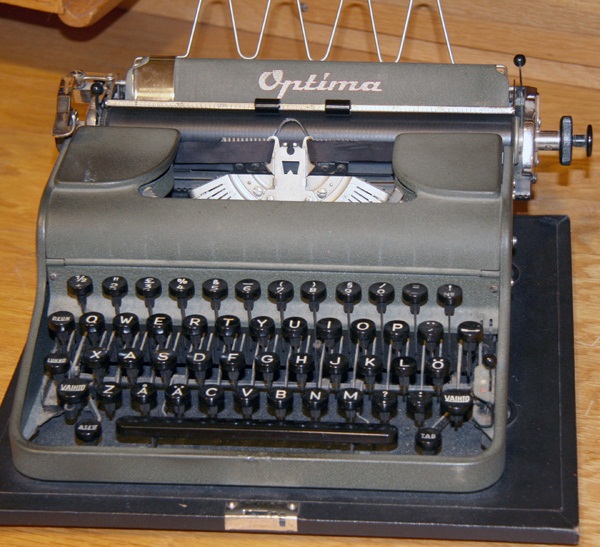 Finally, the name variation of "Ranger" exists, and was sold in the Netherlands.

The first major change to this design took place in 1953 when the body was completely redesigned and changes were made to the carriage. It was produced in a number of different colors and finishes. 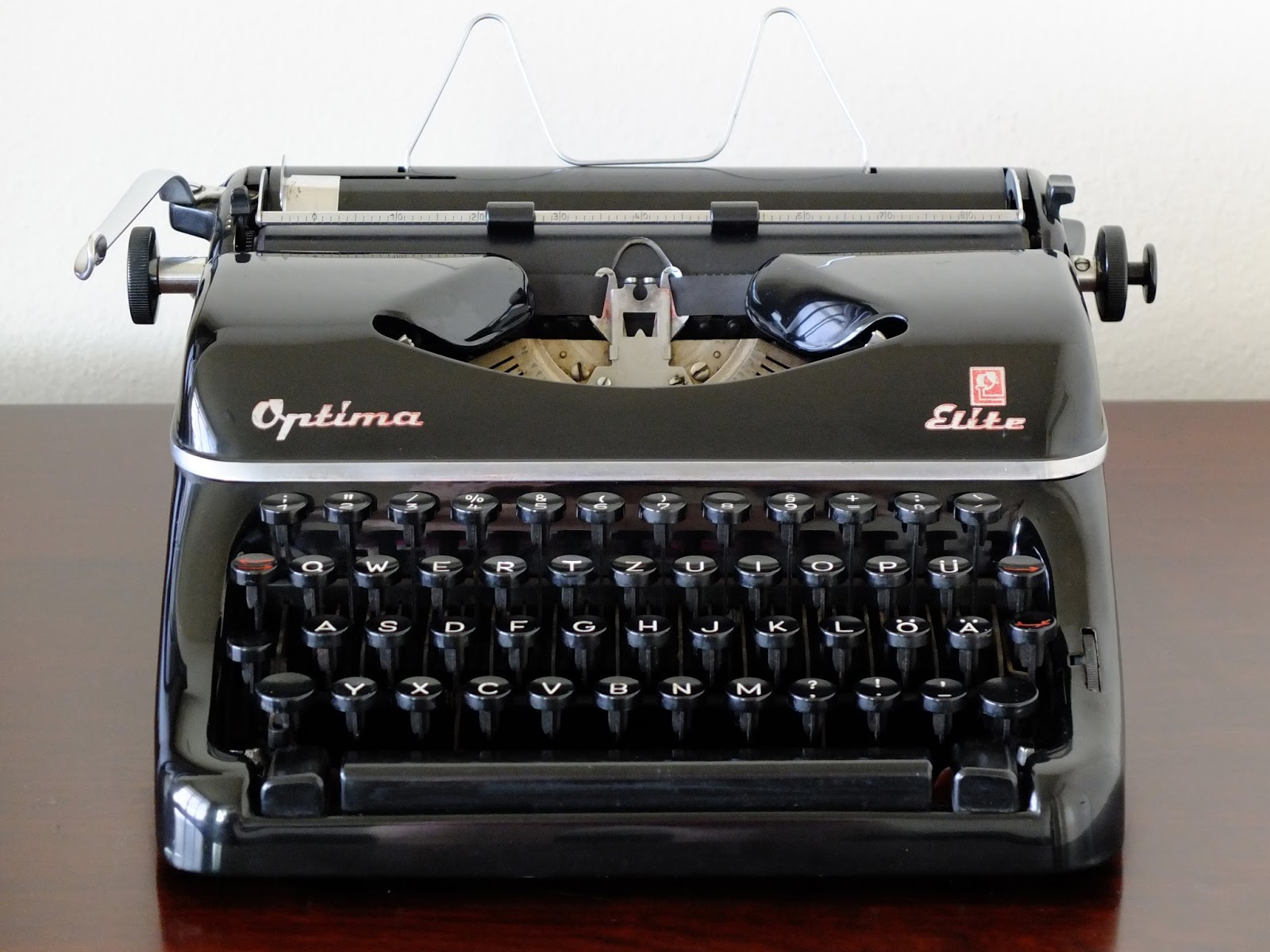 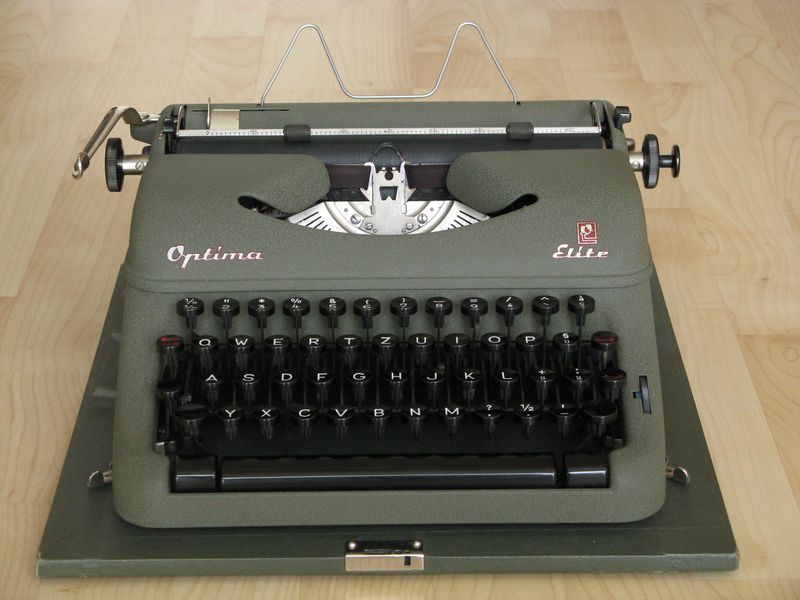 Early on in the production the decals changed to a nice embossed metal logo and a new paper rest was added. The same older style case from the 1940s is still being used.

In 1955 the body was redesigned again, creating one of the great classic portable designs of the 1950s offered in a number of attractive colors. From the appearance, it doesn't seem like much has changed mechanically, but my experience with a very late (1961) model shows a definite improvement over the pre-war Olympia Elite. This model was aptly designated Elite 3, but can occasionally be seen labelled "Elite", "Progress 3", or "Super". 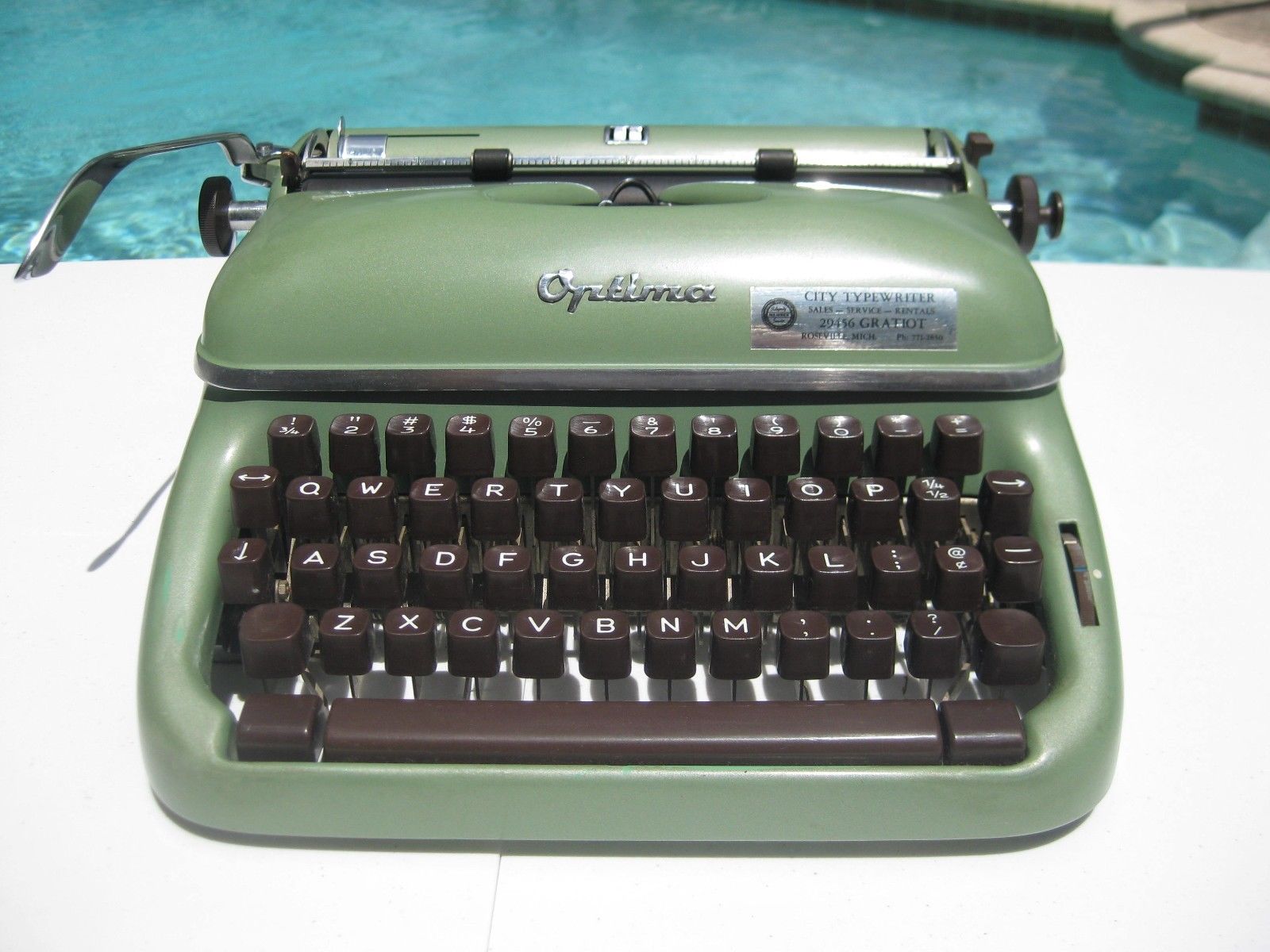 Around 1957, a few more minor changes were made to the body (making the spacebar a little less wide and changing the paper arm design again) and this continued unchanged until the end of Optima Elite production in 1961. The blue typewriter below is a transition between 1956 and 1958, as it has the newer style spacebar but the older style paper rest. 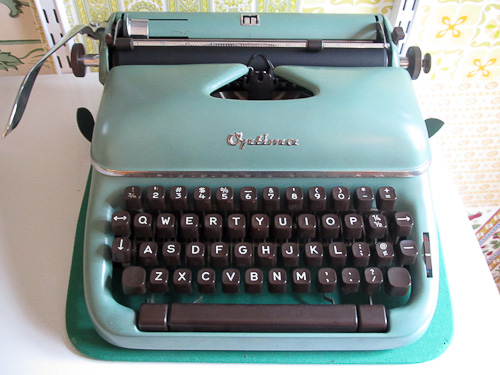 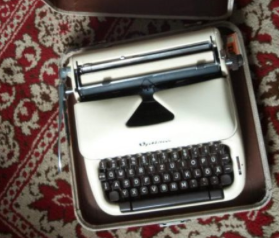 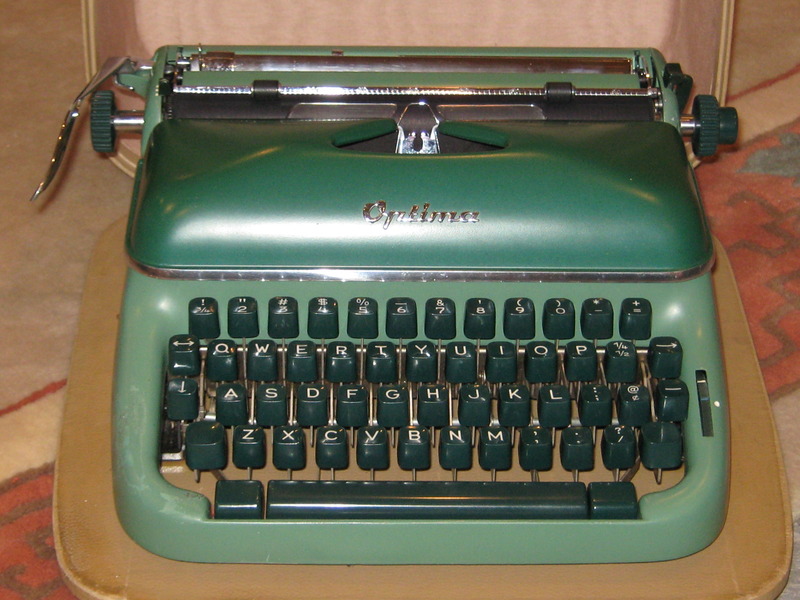 While in the west, Olympia didn't produce any Planas, this model was continued by Optima. The only change other than the decal is that the segment is not made out of bakelite any more. 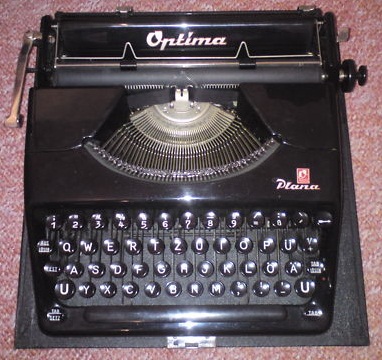 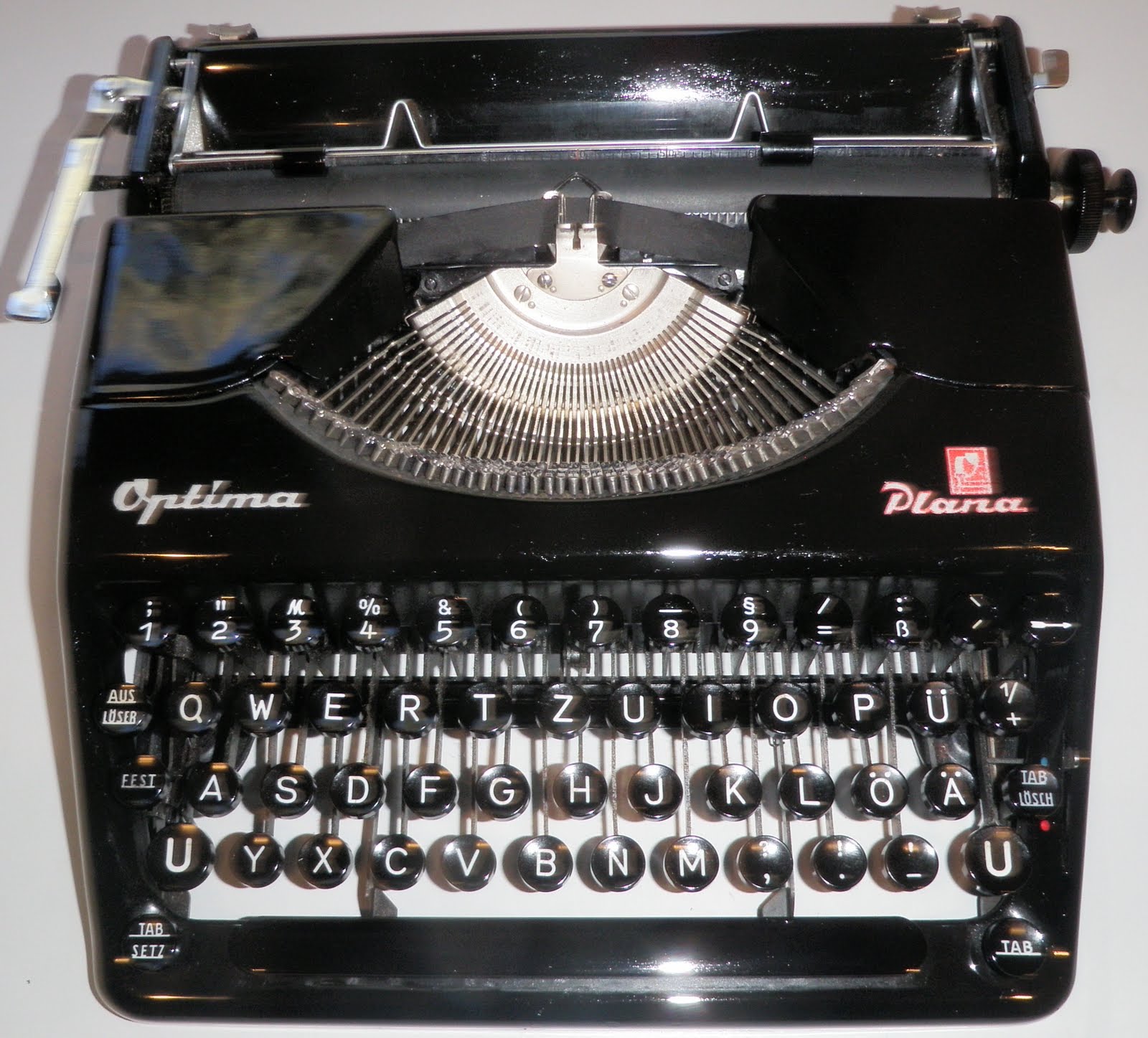 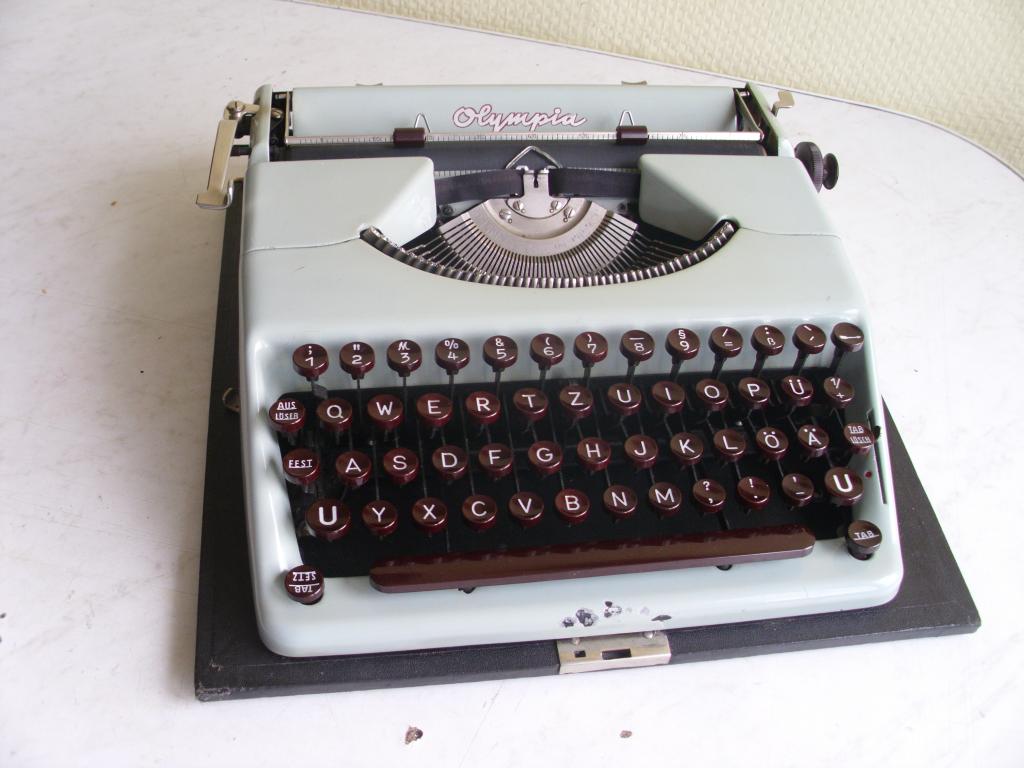 This Olympia Plana was built before the 1951 settlement and therefore isn't quite an Optima, but it was definitely built in the Soviet zone. The one below may or may not have been produced after the war. 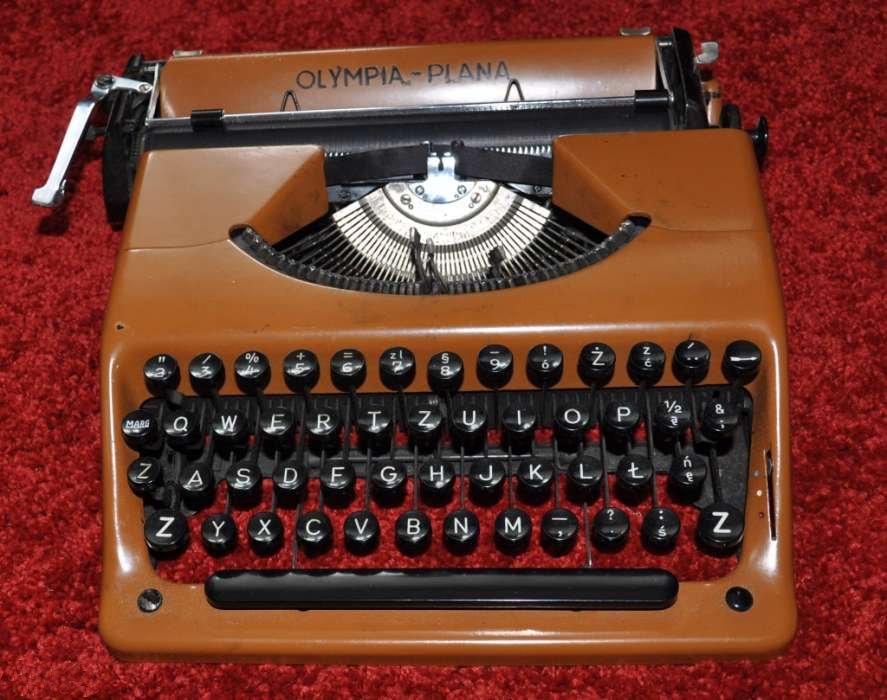 The Plana was updated as the P1 which remained mechanically the same but without a tabulator (and its accompanying bizarre setting system) and a completely new shell. It was offered in tan, silver, green, and probably other colors as well. 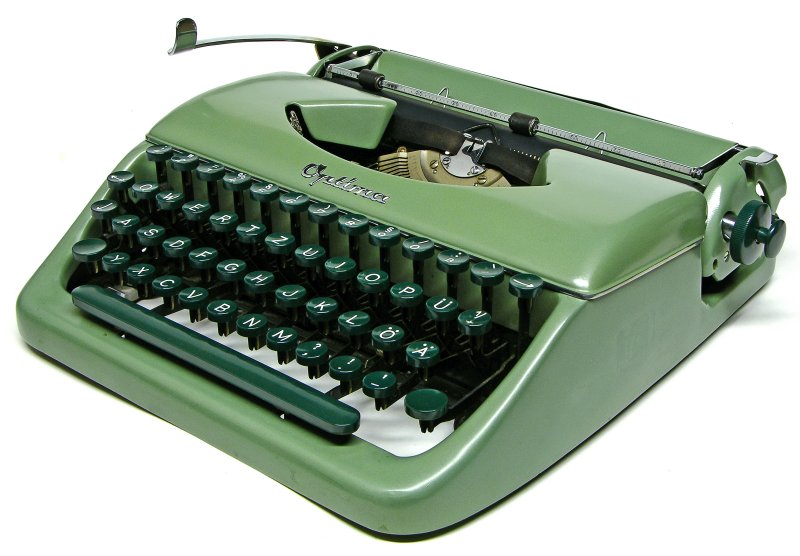 While there have been quite a few East German typewriters rebranded as Optimas for export, the actual Optima was only rebranded once to my knowledge, as a Referent (Rheinmetalls were also branded Referent). 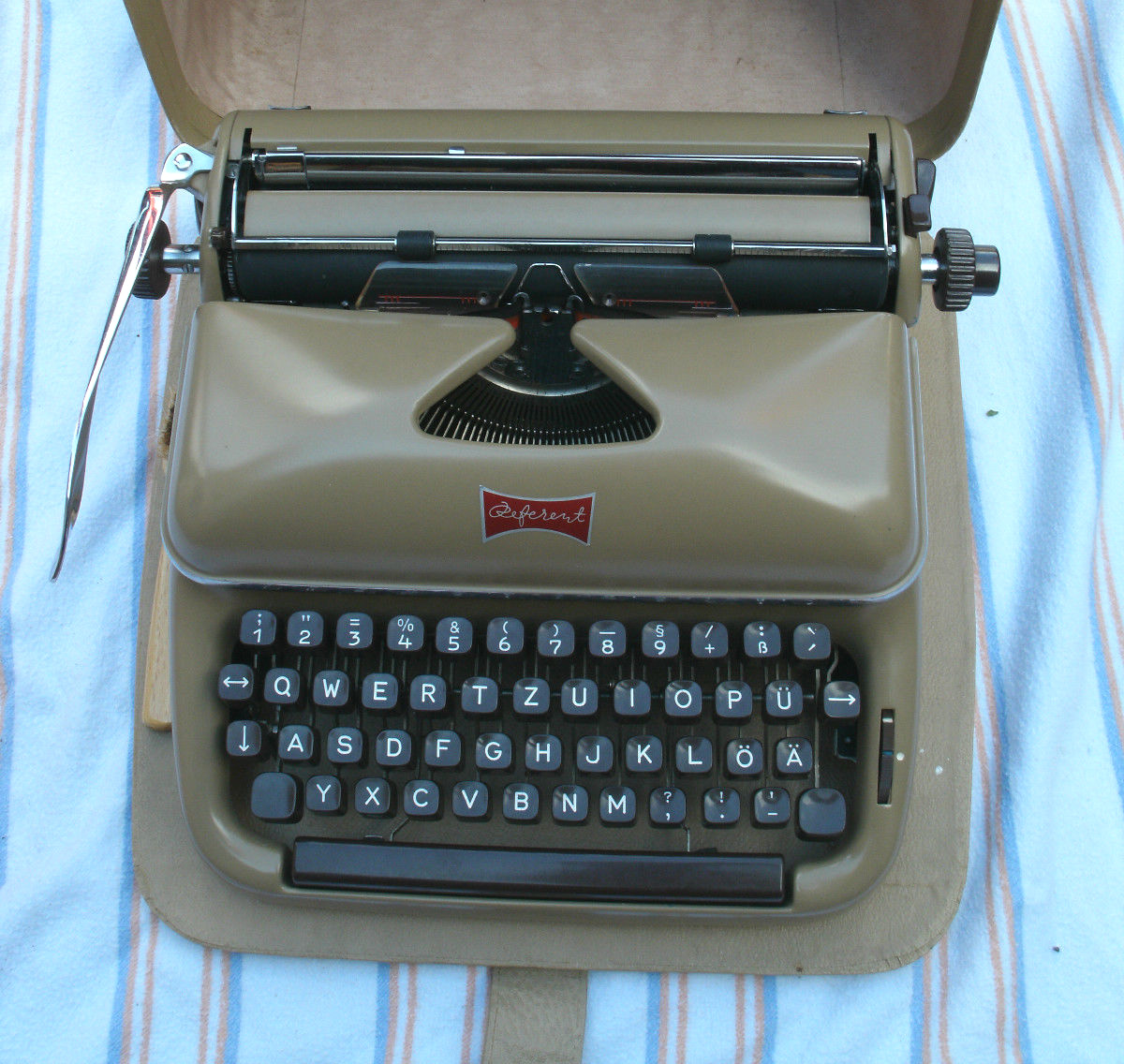 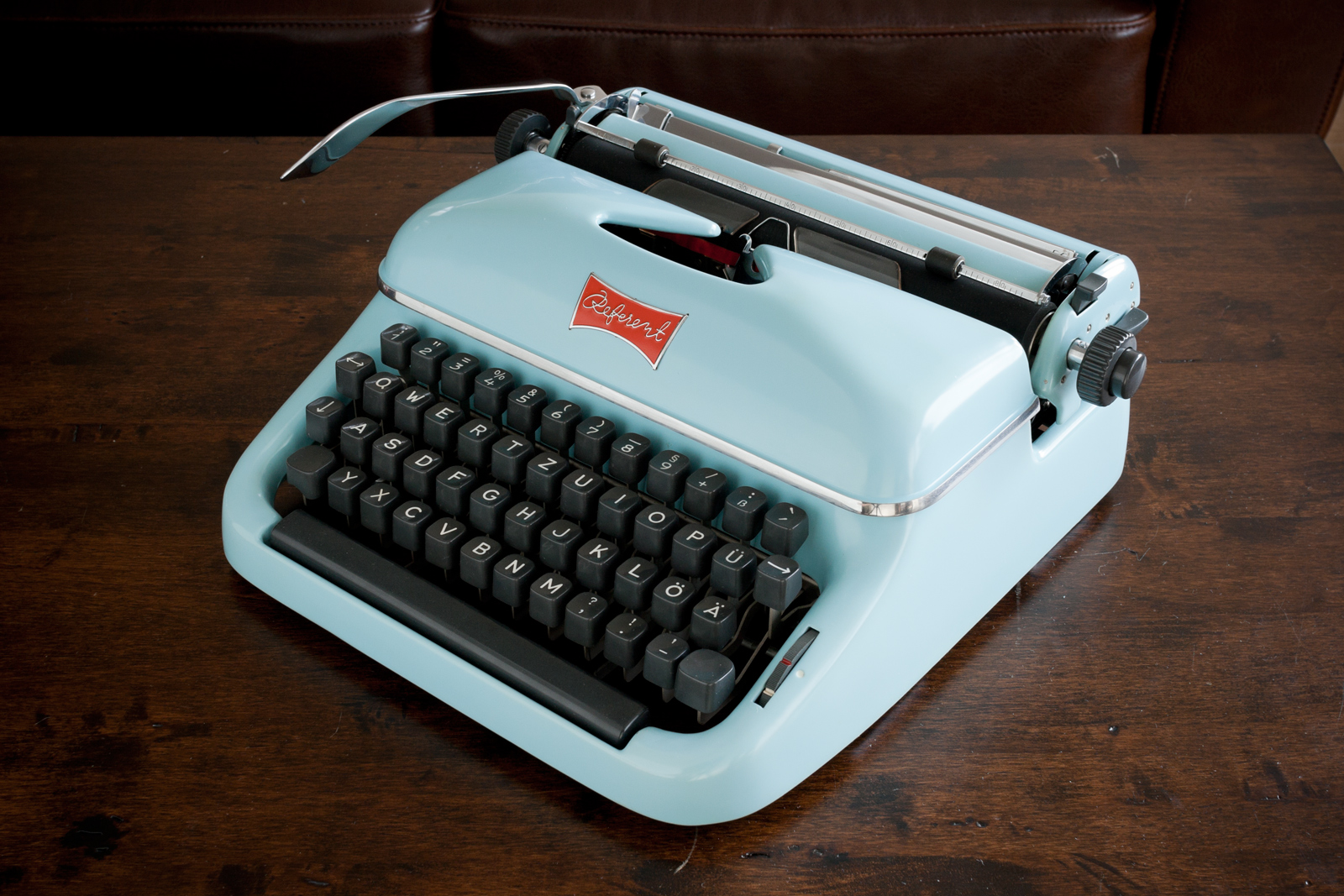 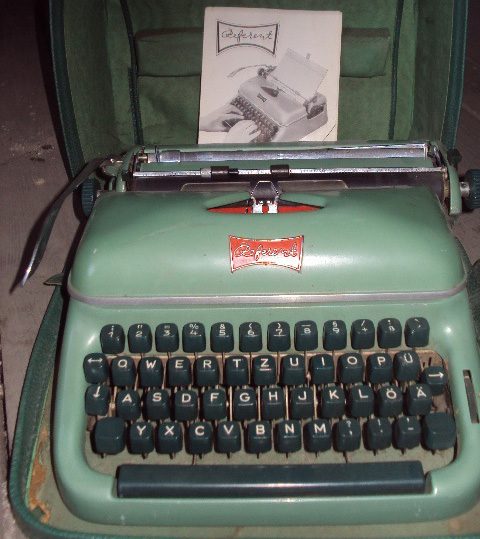 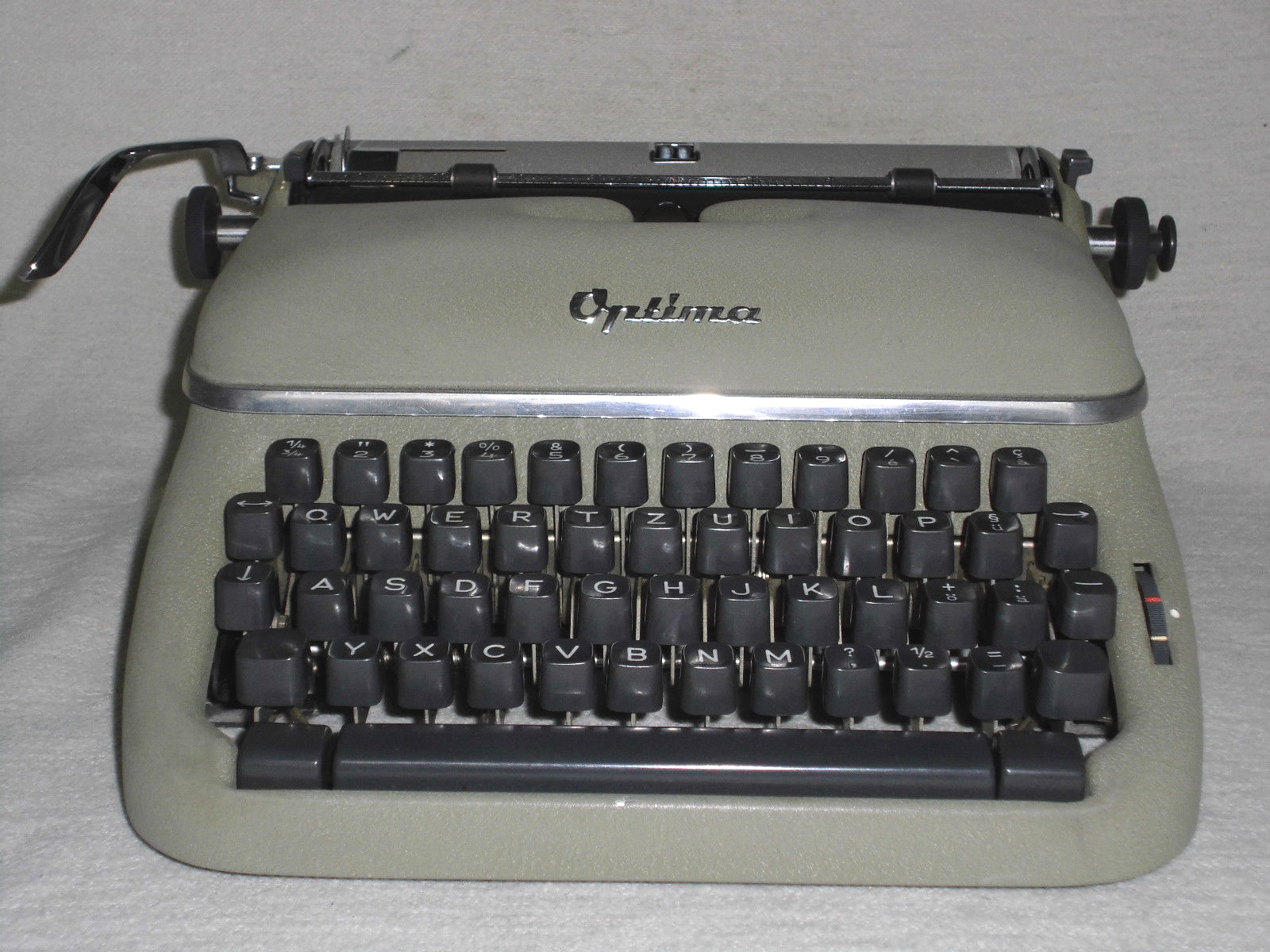 Although not necessarily a rebranding, the Elite 3, first version, was available with crinkle paint in only one circumstance—when it was sold through Scheidegger, the typing school. This one has a Swiss keyboard. 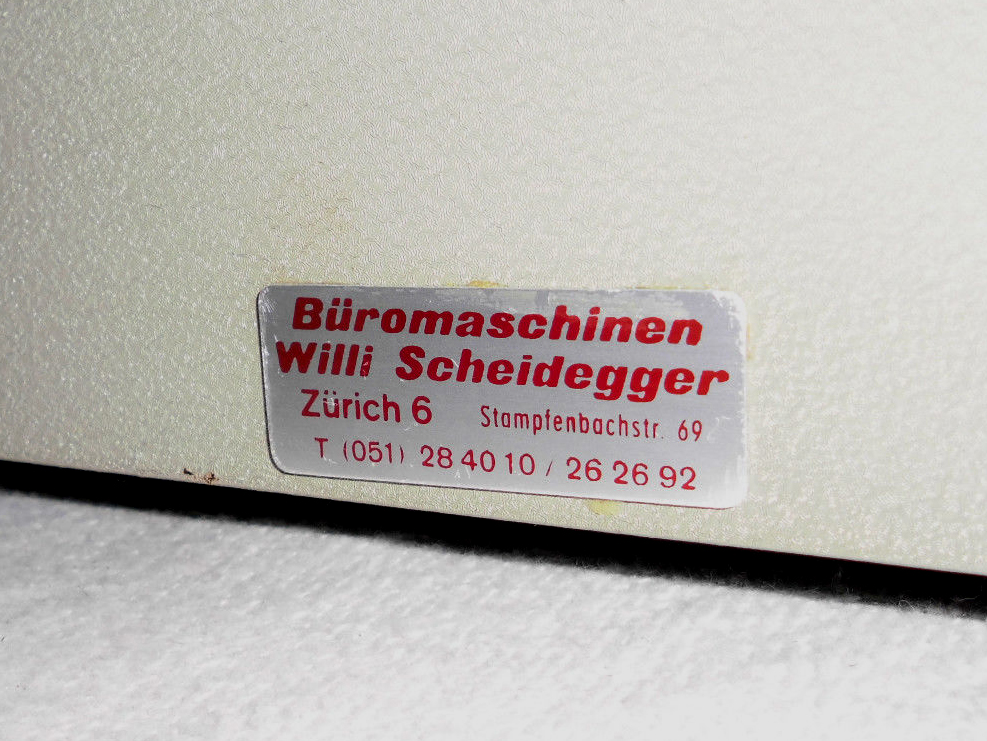 The Optima name was used on Erikas primarily, but a few Consuls were branded as Optima, interestingly, including a very late one that might actually date to after the fall of Communism in Czechoslovakia. 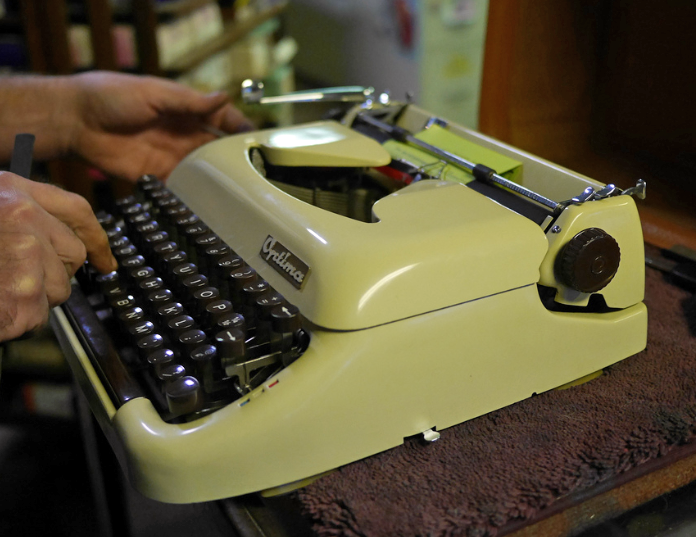 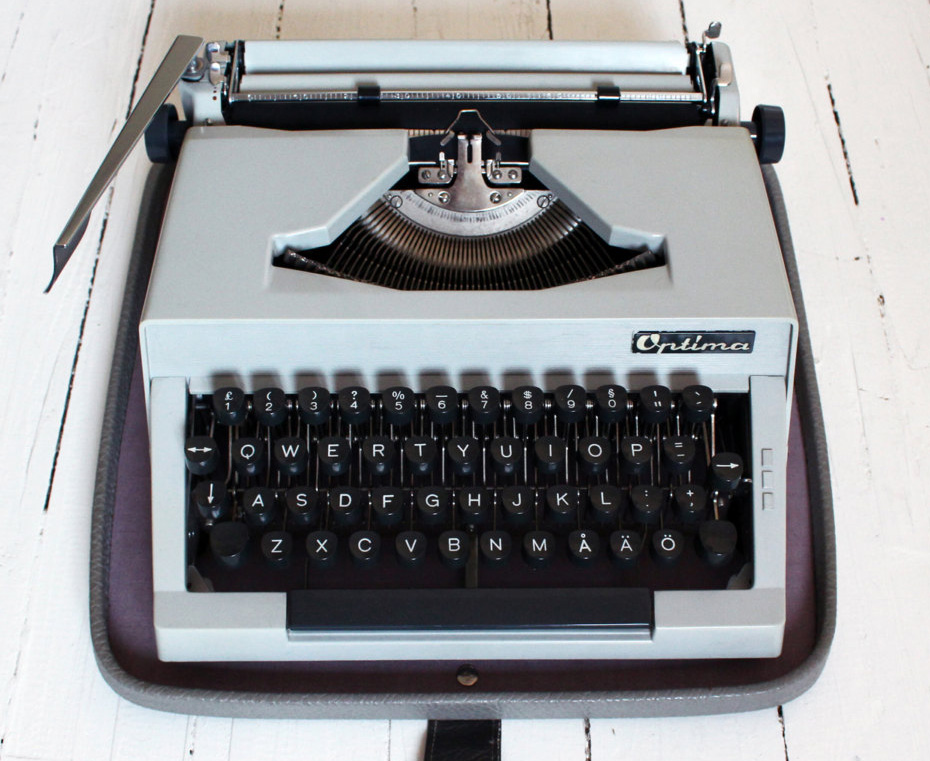 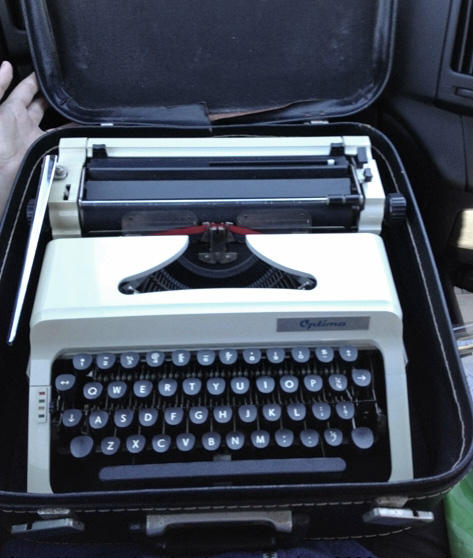 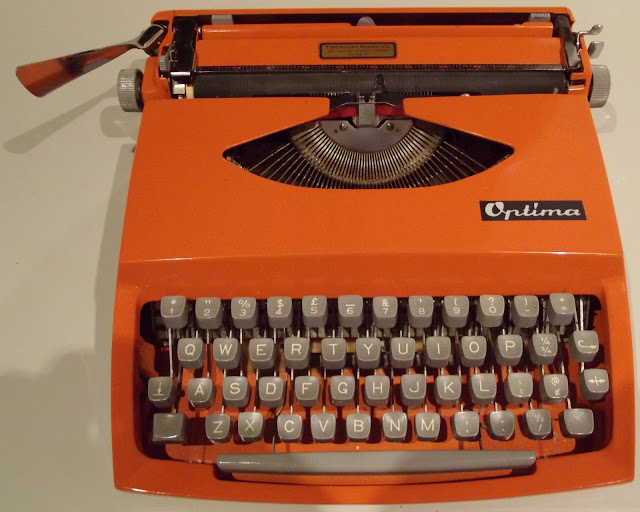 As for this, it's said to have been produced in Moscow, but I'm not sure:

In 1961, production of the Optima portable ended as all DDR portable typewriter production was taken over by Erika. Optima continued to produce standard typewriters until the fall of the DDR under the authority of Zentronik and eventually Robotron. By the end of production in August 1991, Robotron was one of the last manufacturers of high-quality manual typewriters.