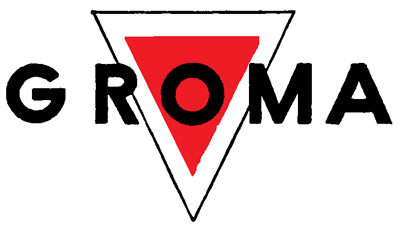 Of all the typewriter brands, Groma has one of the more interesting reputations. This post is about as far away from a colorful story as you can get, but hopefully it entertains as well as informs. It will cover only the larger Groma portables, as Piotr Triumpiel (zetix) will be doing a similar detailed post on the Gromina/Kolibri.

All typewriters with serial numbers indicated have been dated using the list at the bottom of the post. Regarding the numbers; there are a number of different sources that all slightly contradict each other. The sources I am using are the newest and most complete available. The accompanying Groma typewriter database page has been updated.

The original Groma portable design with the plastic front curved piece continued to be produced after the end of WWII until 1949. Around serial number 260000 in early 1949, Mechanik Groma VEB, Markersdorf/Chemnitzal was created and replaced G F Grosser as the producer of the Groma portable. Up to this point, the keys have always been metal-rimmed glass, but with occasional use of plastic for the backspace and margin release. 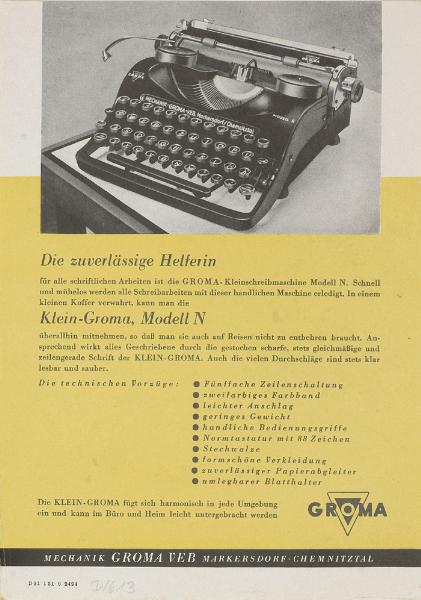 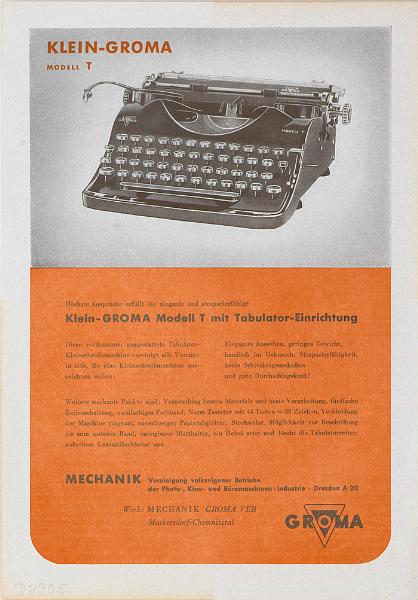 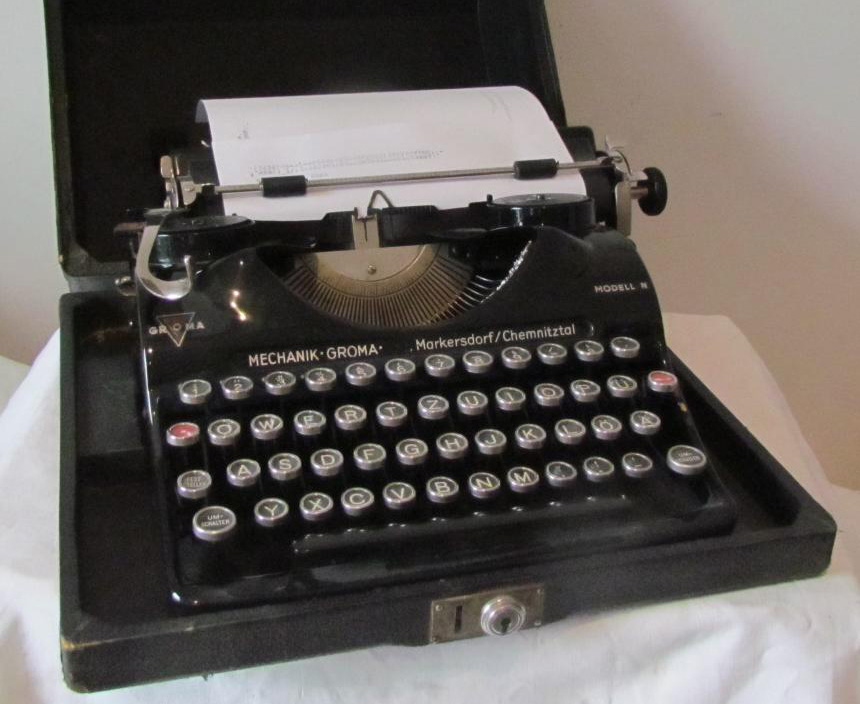 The old style design continued to be produced until the end of 1949, when it was replaced with a sleeker, more robust front piece made of metal instead of plastic. This is the classic Groma look adored by many. 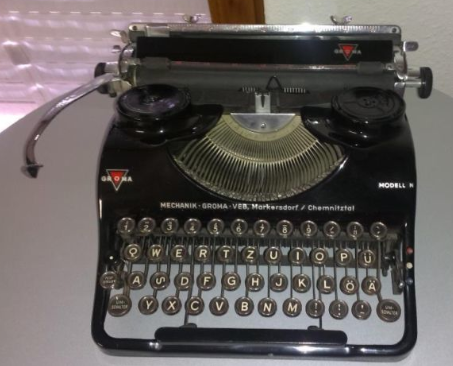 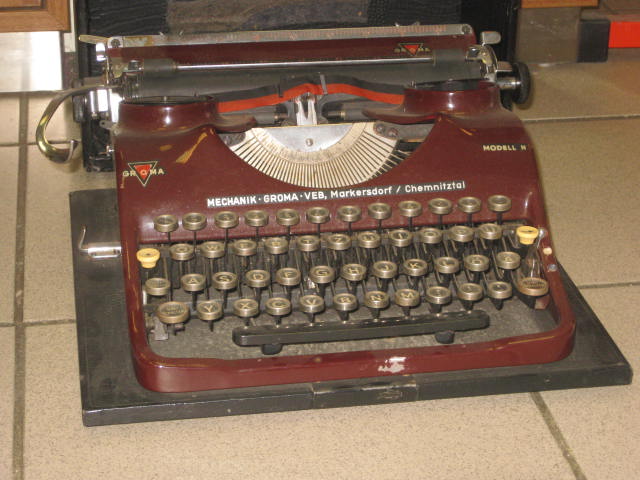 The keys initially remain glass, but soon two different styles of plastic keys were introduced, square and circular. The square ones came in green, red, and black. The circular keys came in black with red detailing on the function keys and appear to share similarities with keys used by other manufacturers in what became East Germany before WWII (Rheinmetall and Mercedes). It appears as if the square keys were used only on the Modell N, while the circular ones were used predominantly on the Modell T. 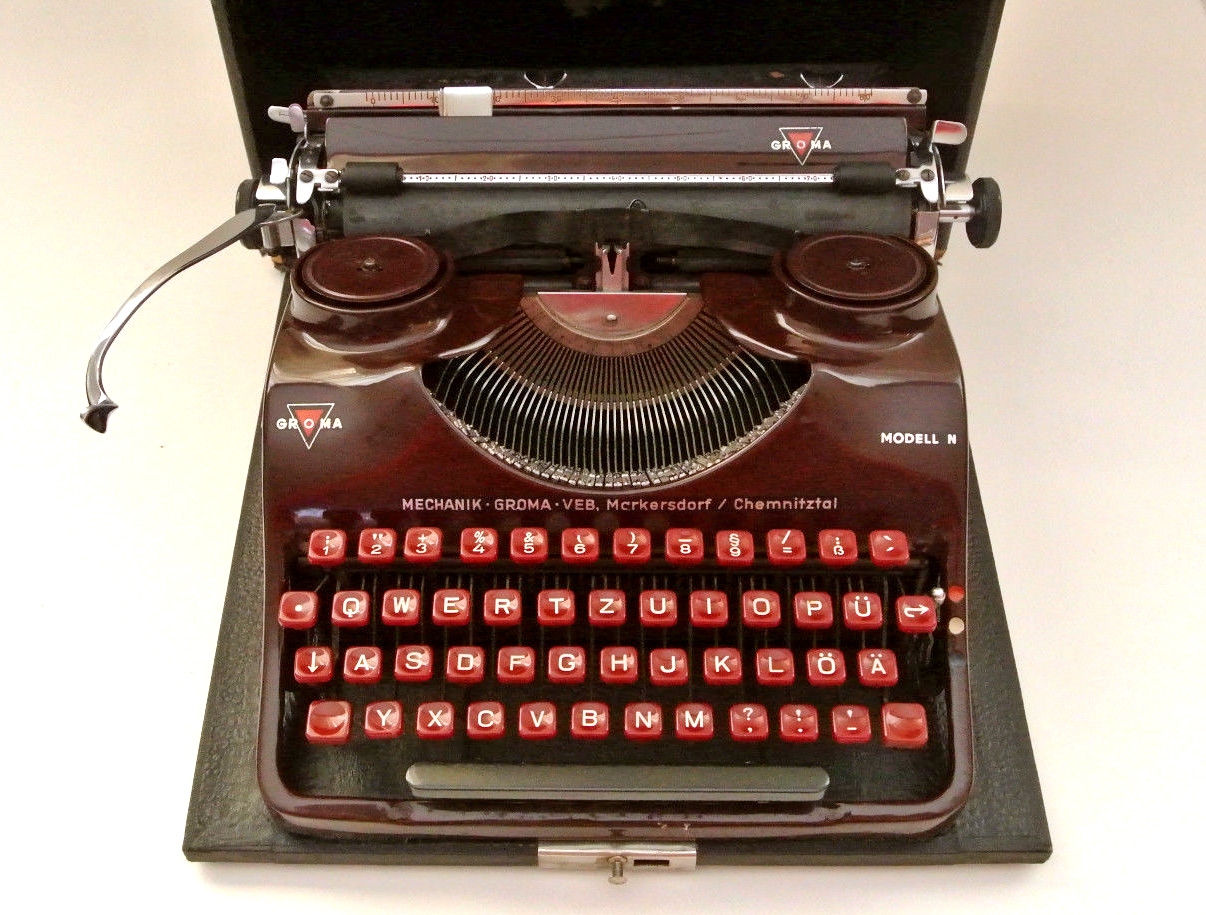 There are a couple of variations in the decals used on these 1949-1951 Gromas, seen below. I do not know for certain, as I don't have a large body of serial number examples, but if plastic keys replaced glass keys (rather than being used alongside each other) then it happened around serial number 275000. 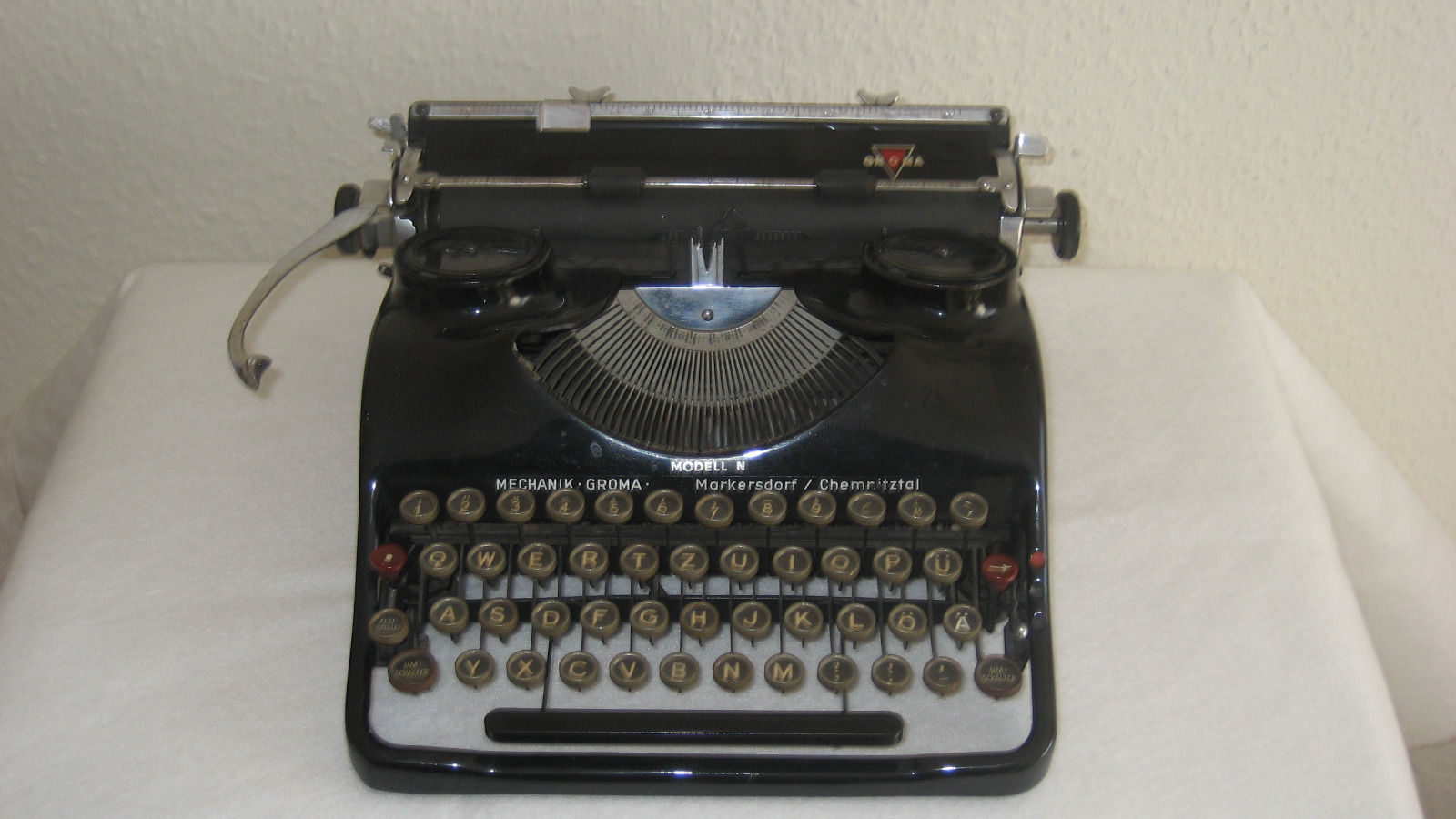 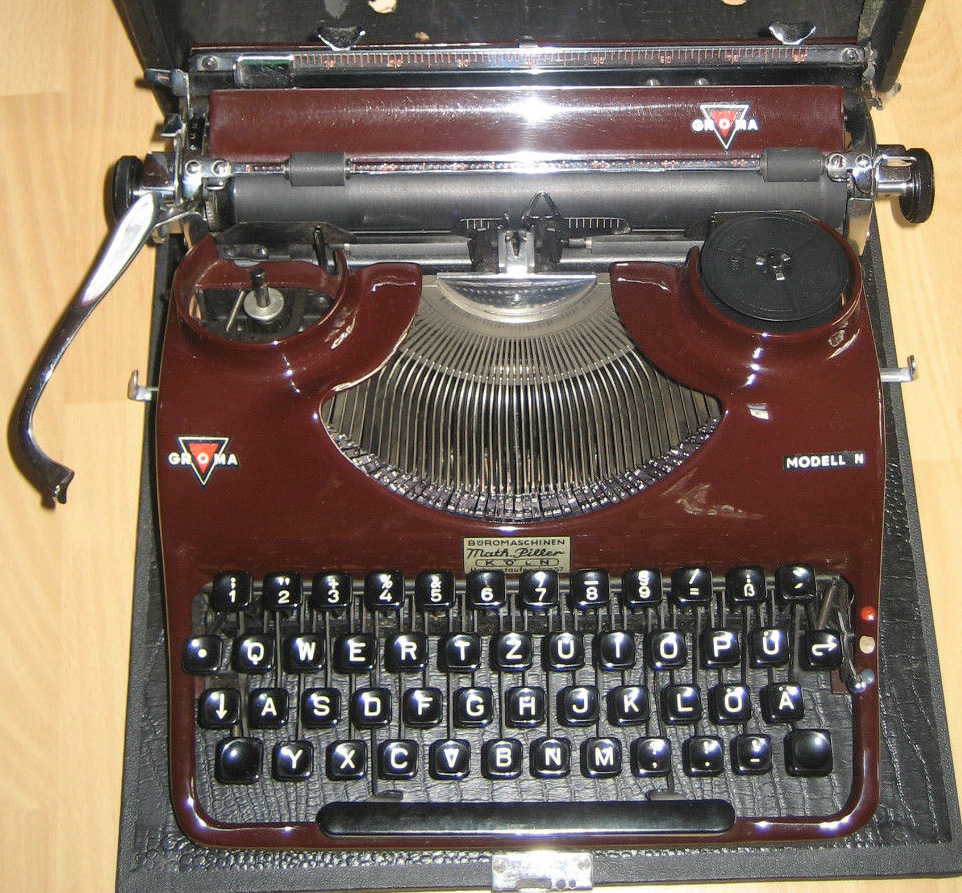 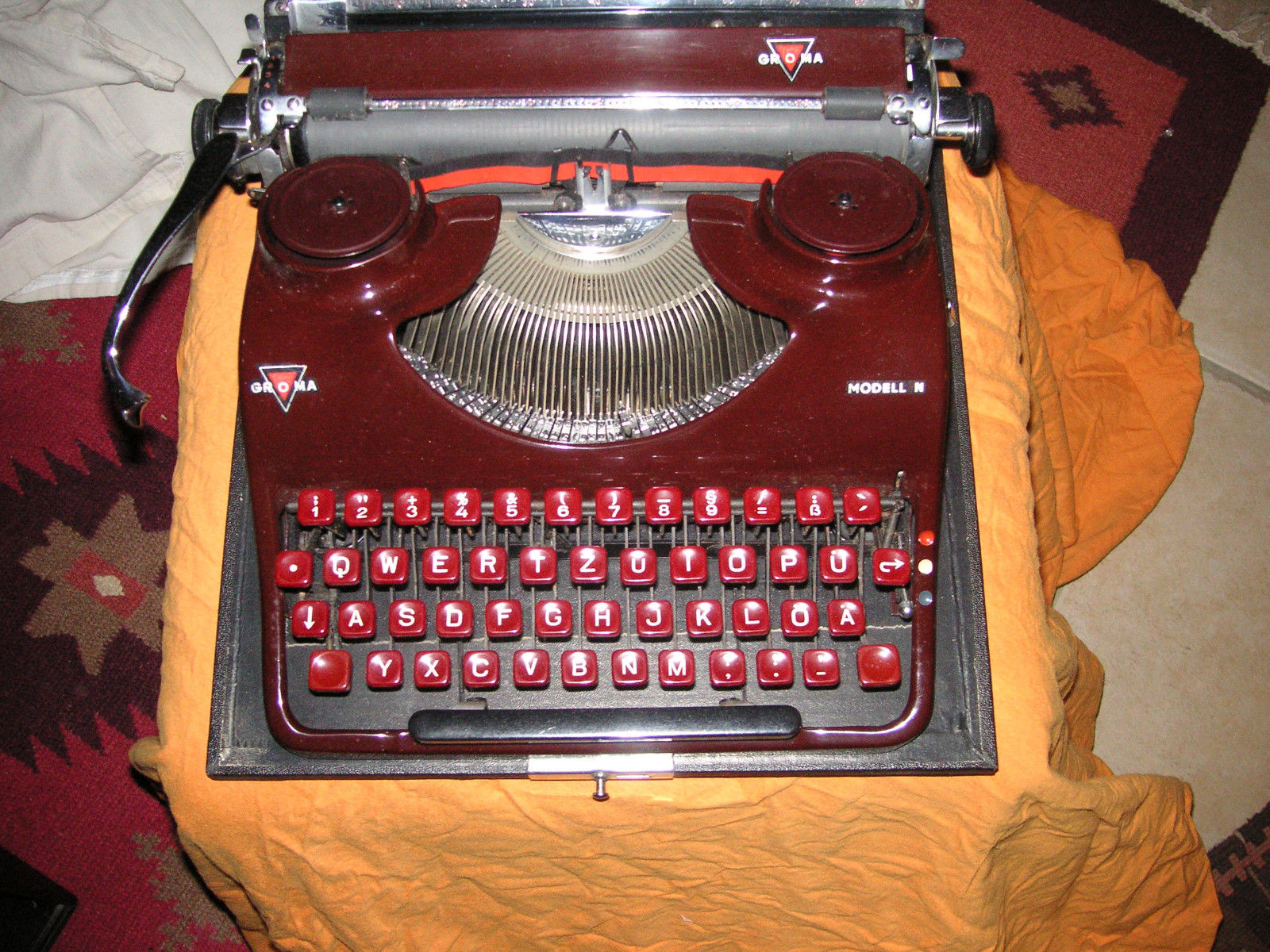 An all-new body style was introduced in 1952 with the same square keys, a crinkle paint finish, and new carriage knobs that is otherwise mostly unchanged from a mechanical perspective. 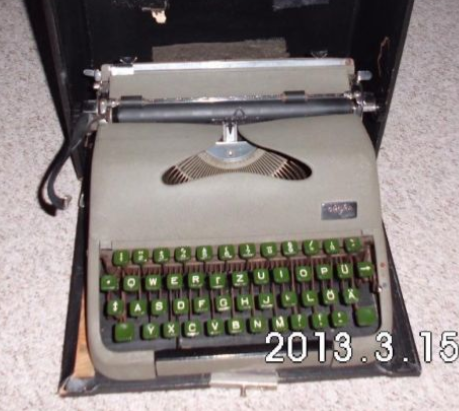 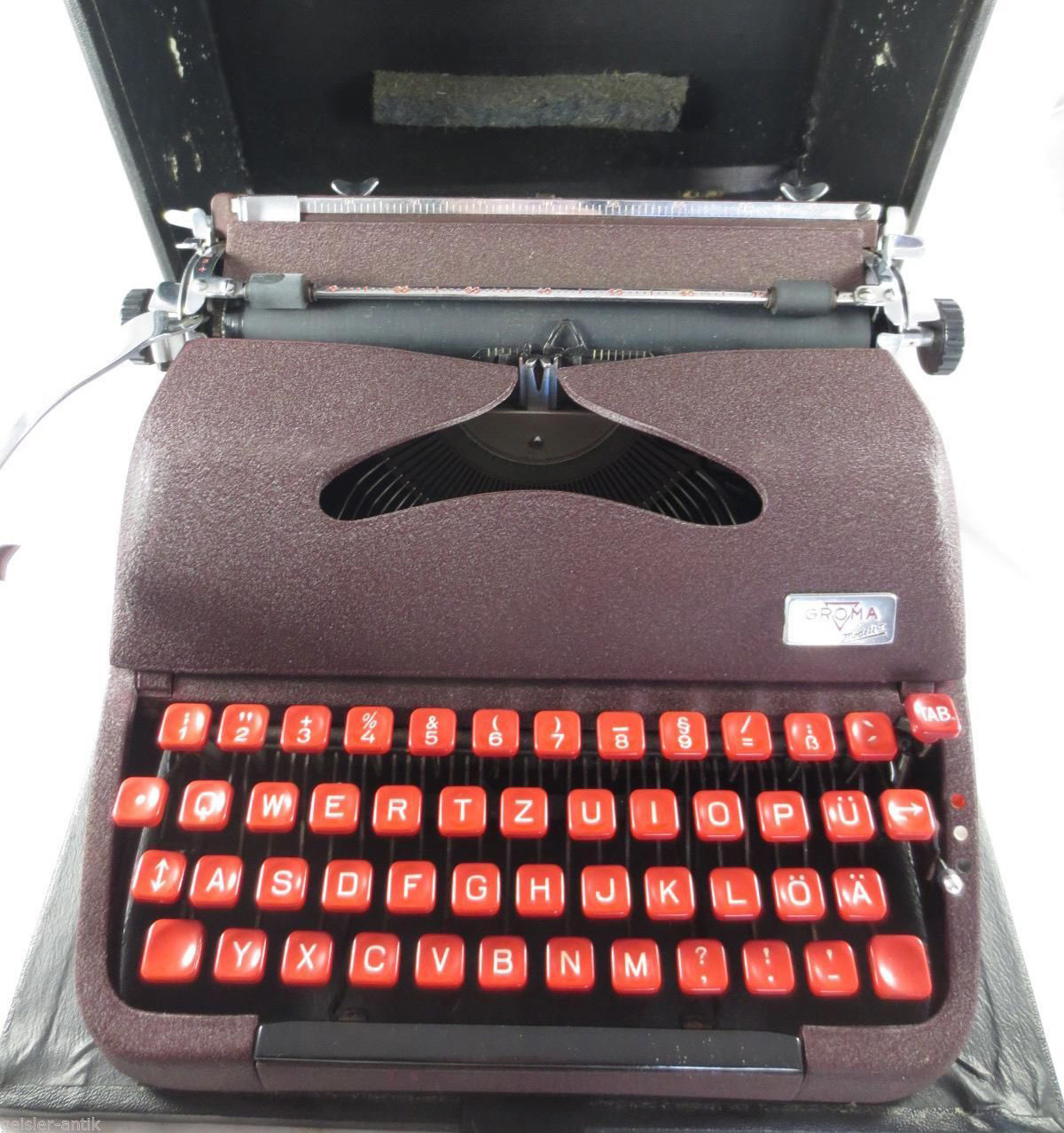 The keys were switched to a more modern top-heavy oval shape similar to the ones Erika used between 1953 and 1954. 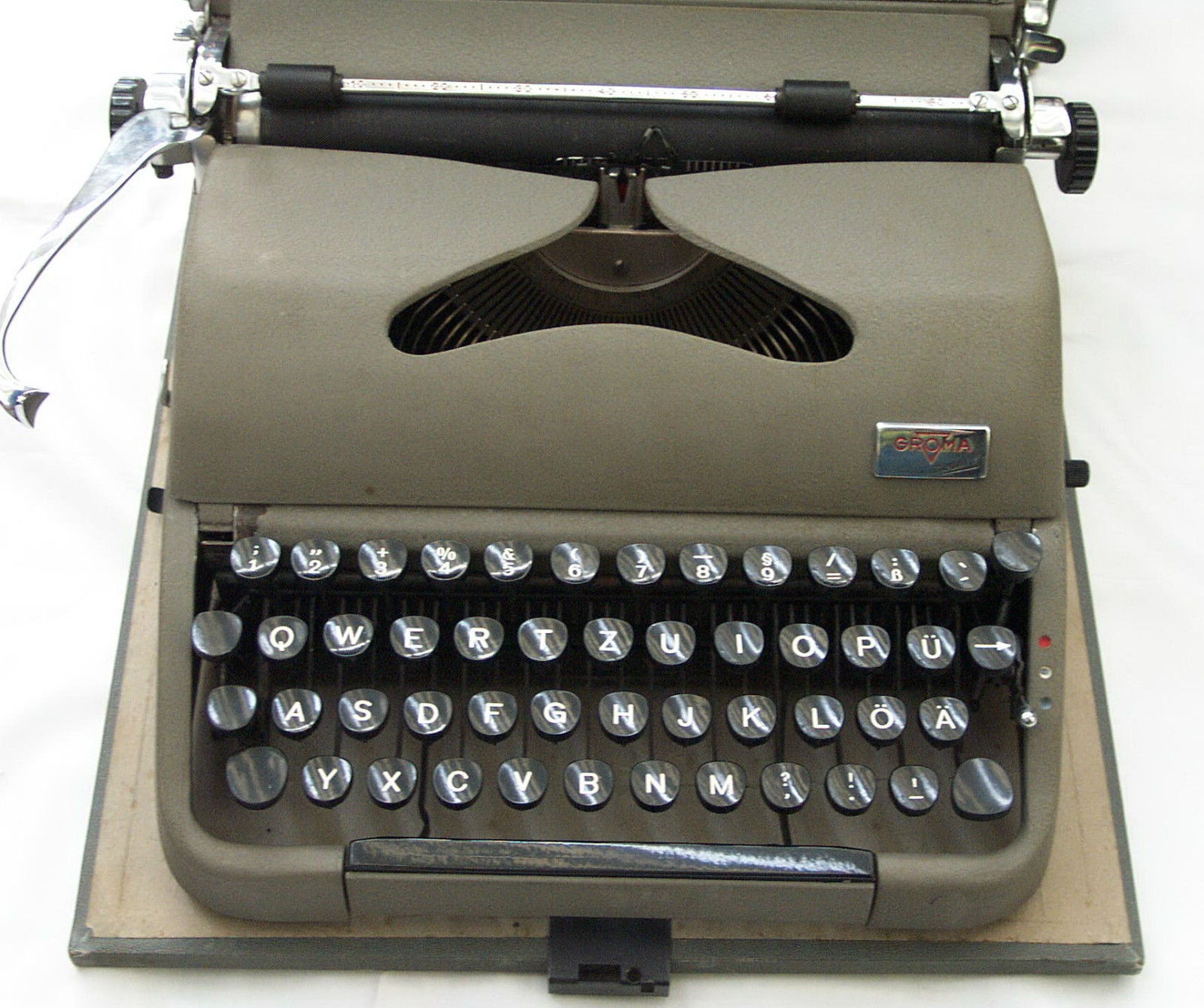 In 1954, the ribbon color selector dots changed from circular to oblong and new carriage release levers were introduced. 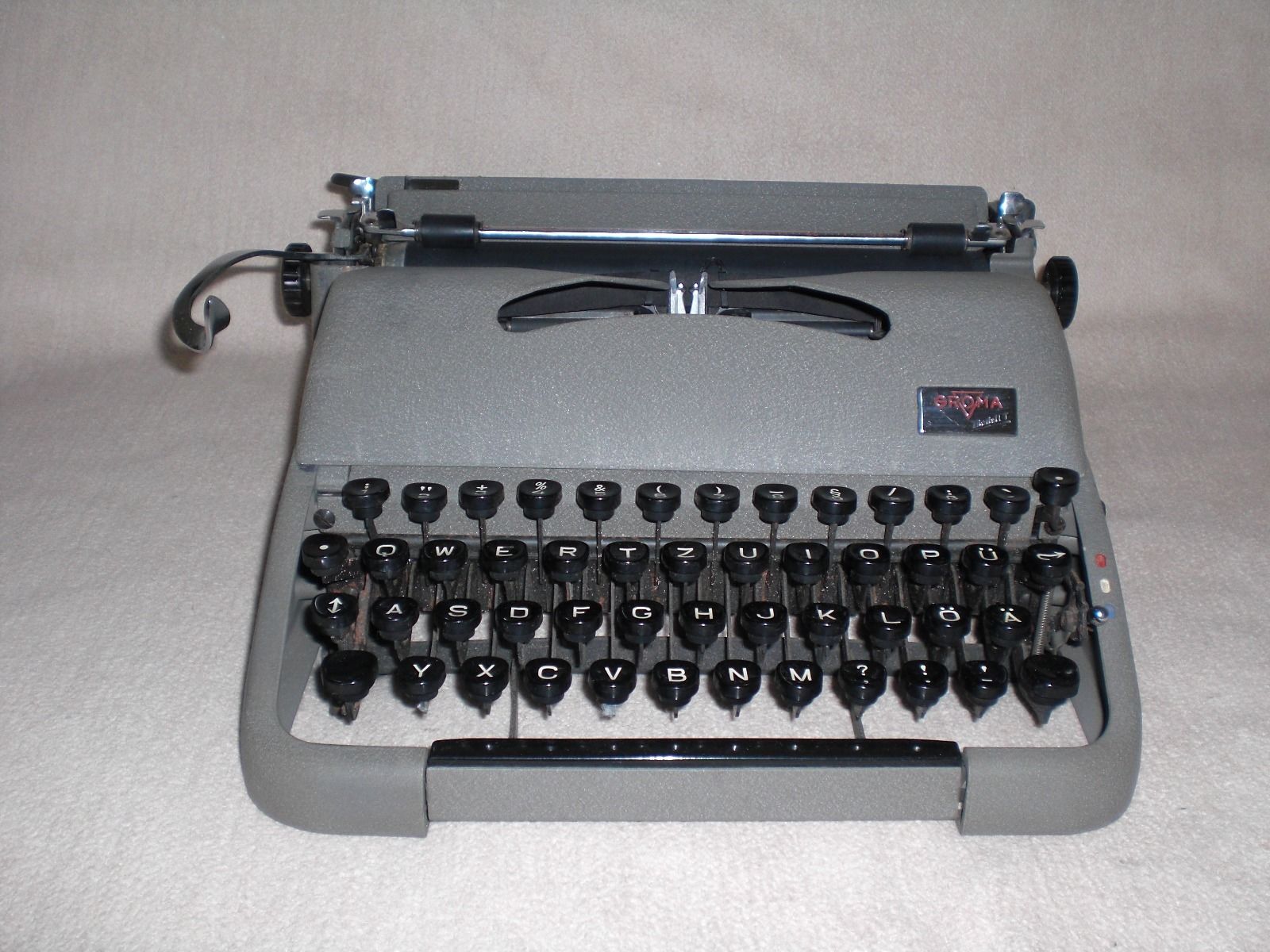 That same year, the paint was changed to a glossy finish and a chrome stripe was added to the ribbon cover. 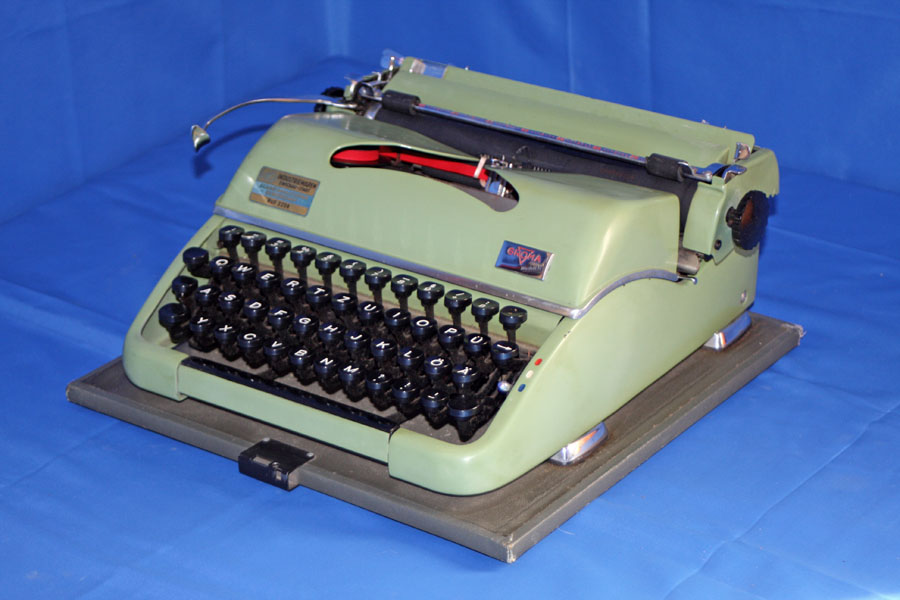 In mid-1956, the logo was changed to a nicer embossed design. 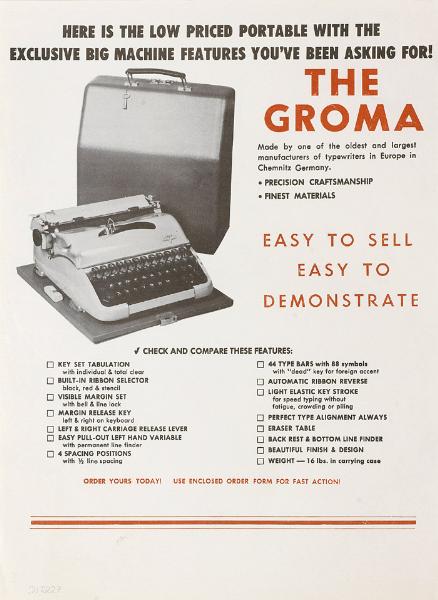 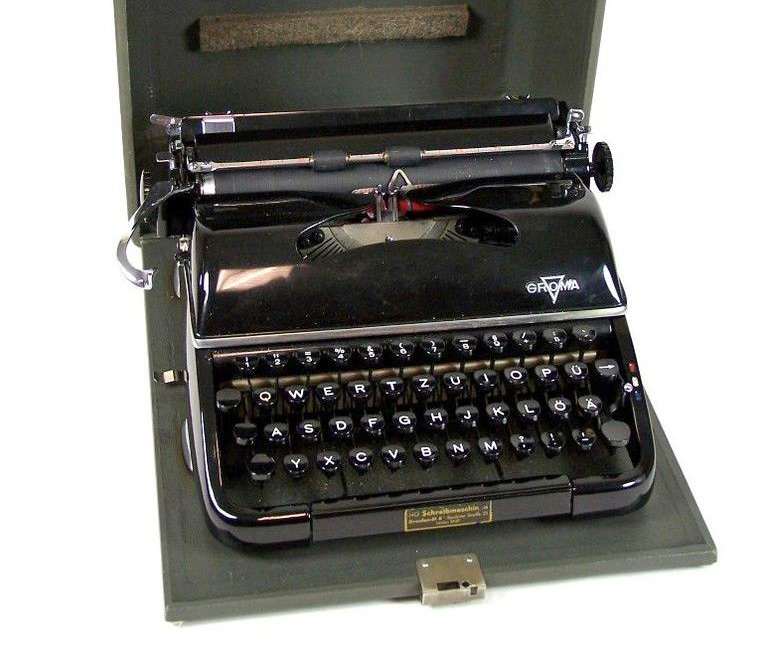 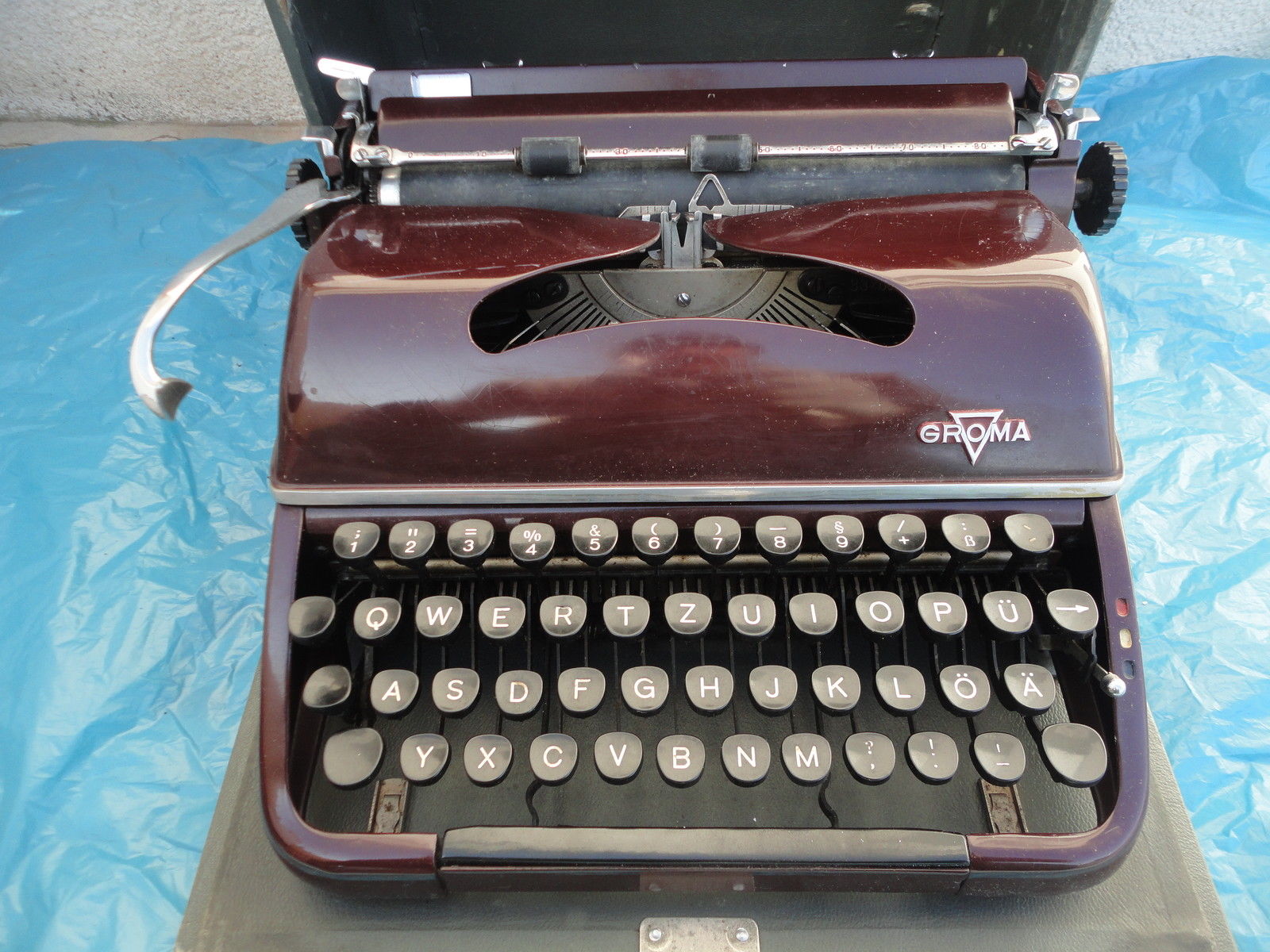 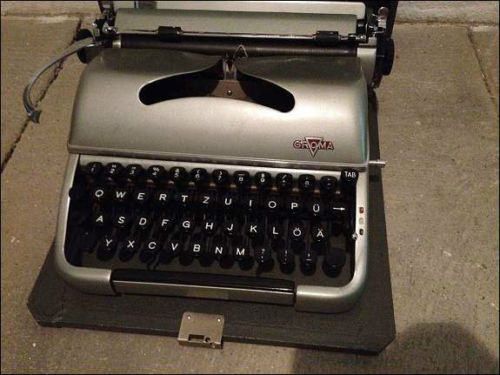 A variation of the logo exists with a decal replacing the embossed nameplate, possibly from very late in 1957 near the end of production, which ended in 1957. 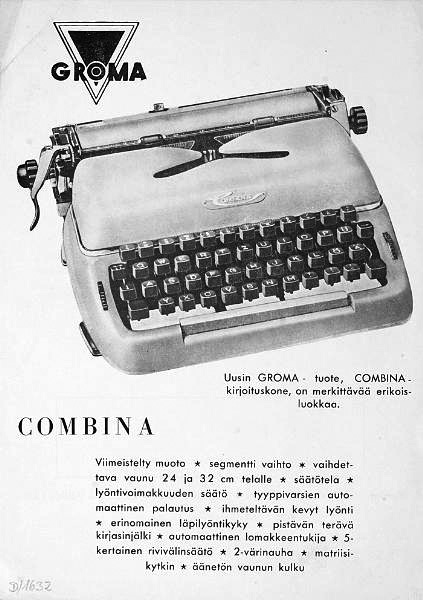 The Combina was designed as a replacement for the long-lived N/T series, loosely based on the original design but with many improvements and changes. In early promotional material, it is shown in an illustration that differs from any Combinas I've seen. The keys are more squared off, and the Combina logo is in the center of the ribbon cover.

It was offered with or without keyset tabulator, and with interchangeable carriages in two widths. Initially, the keys are black and the paint is silver.


Between 1958 and 1959 the keys are changed to green and the silver paint has taken on a bit of a green tint. One rebranding, Brillant Super for Neckermann, is known.


In 1959, a number of changes were made. Most obviously, the cutout in the ribbon cover has a more streamlined, simple shape. A detailed comparison of the other changes made. The keys and paint remain the same color as before.


In 1959, the tab set mechanism was changed to a more ordinary lever, and the model continued in this form until the end of production the next year. 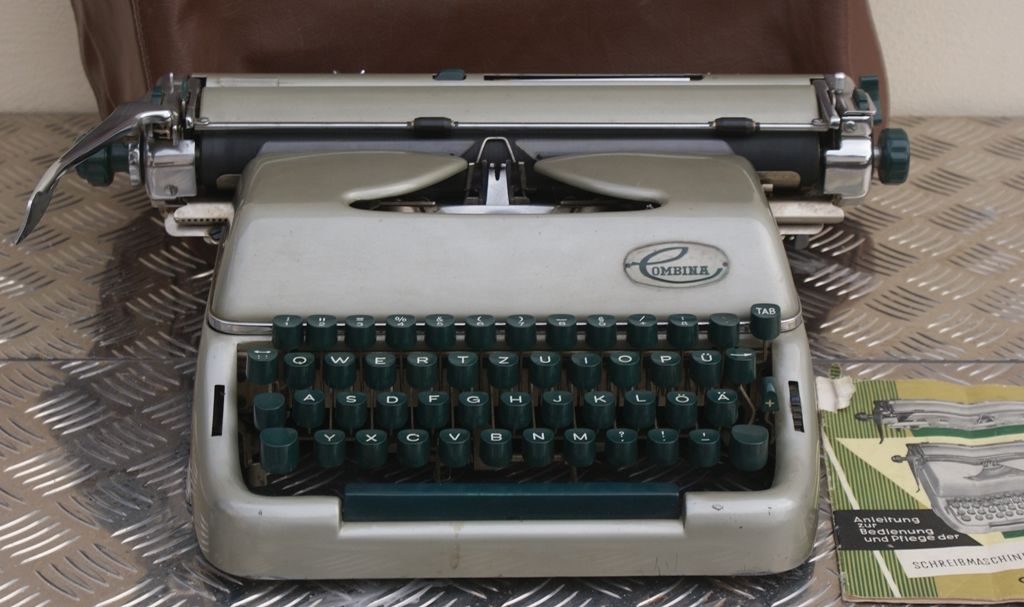 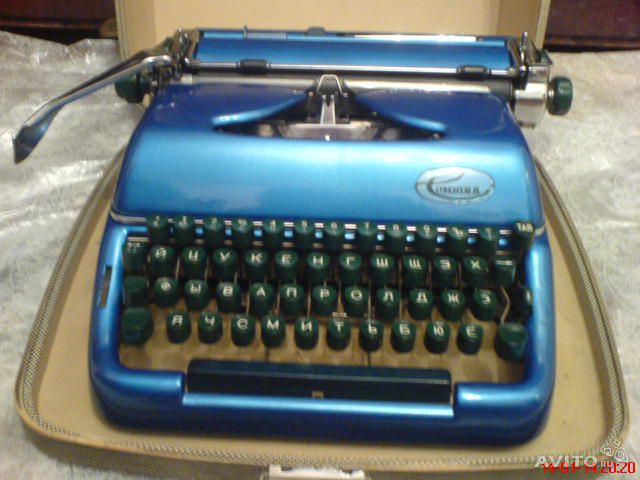 This is an odd version that I've found, with metallic blue paint. It doesn't seem like it could be original, but the quality of the paint job is so good that I figured it was worth including here. 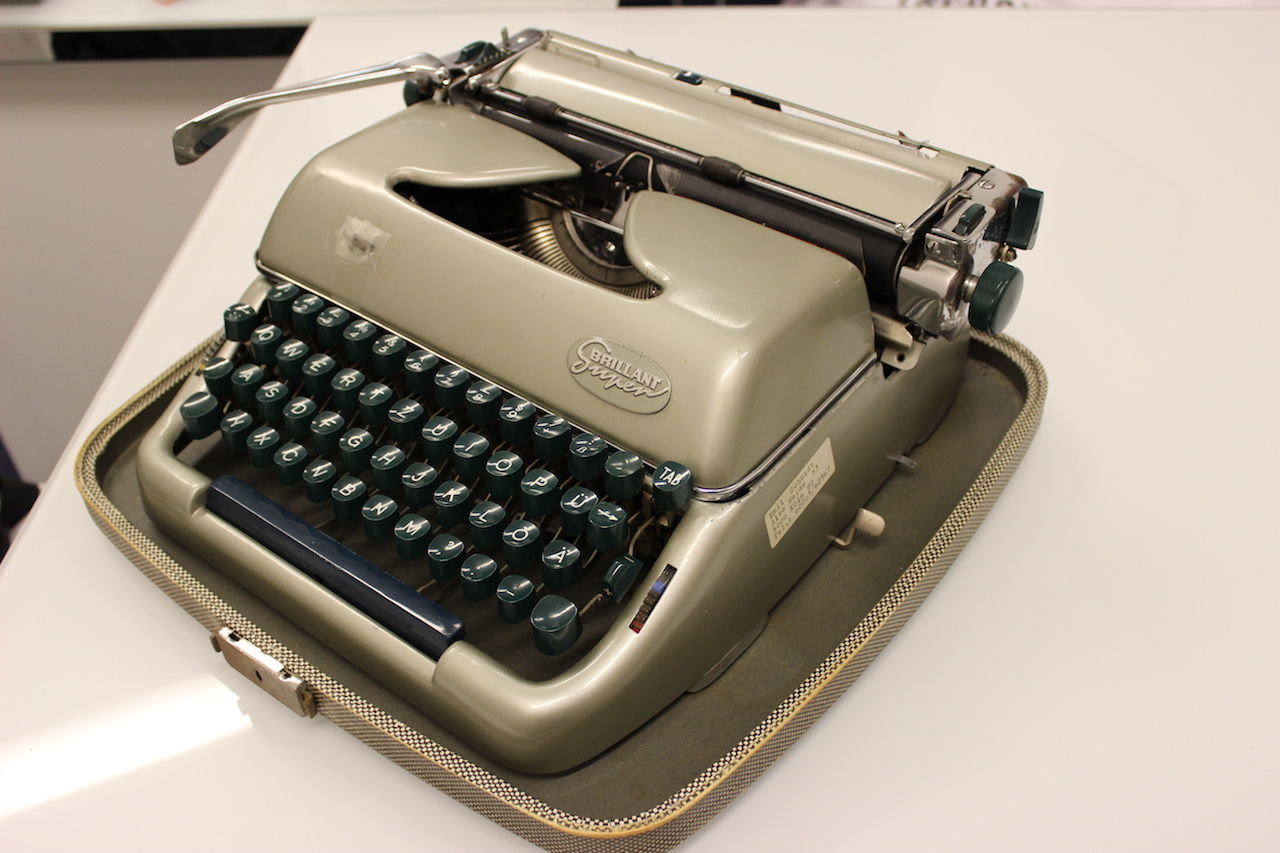 The later versions of the Combina can also be found as a Brillant Super. Production of the Combina ended in 1960, concluding the production of a mid-sized portable by Groma. The Kolibri continued to be made until the end of 1962.