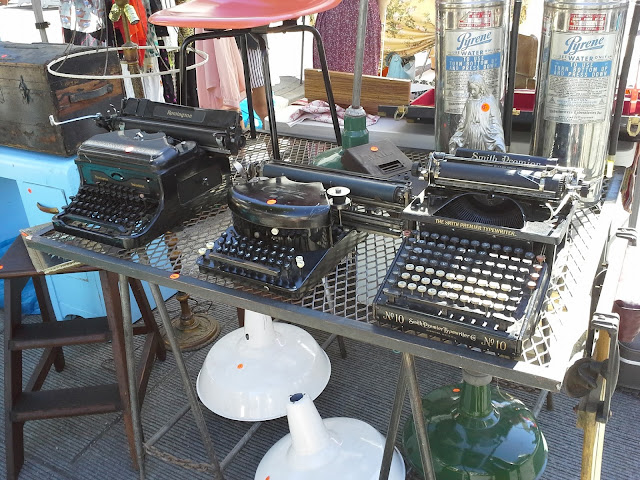 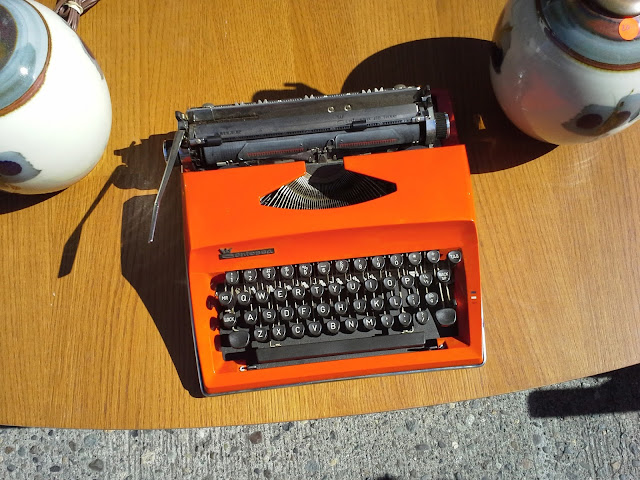 Prepare yourself to see a lot of horrible photos of typewriters that I didn't buy! It's taken many months, but I finally seem to be finding typewriters locally. It's been almost a year since I moved and I had not found any typewriters locally that were fairly priced for a good 6 months, and certainly nothing special until this month. Before now it was all morbidly overpriced Royals, pretty much. The Fremont Sunday Market, on the other hand, seems to be out there to prove me wrong. (The two photos above were taken the first week of the market. The Contessa had no lid and no price.) 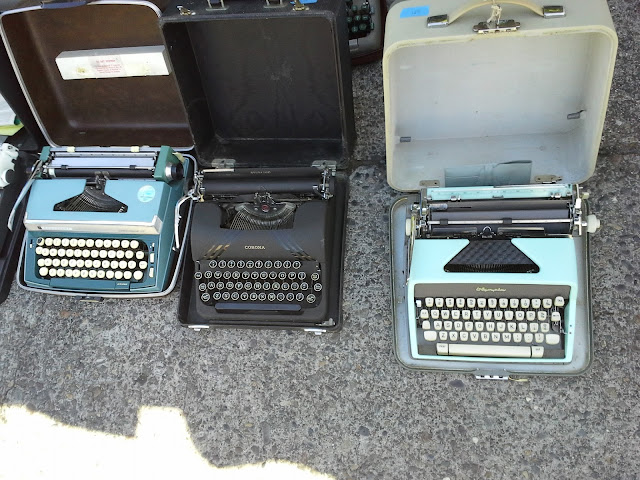 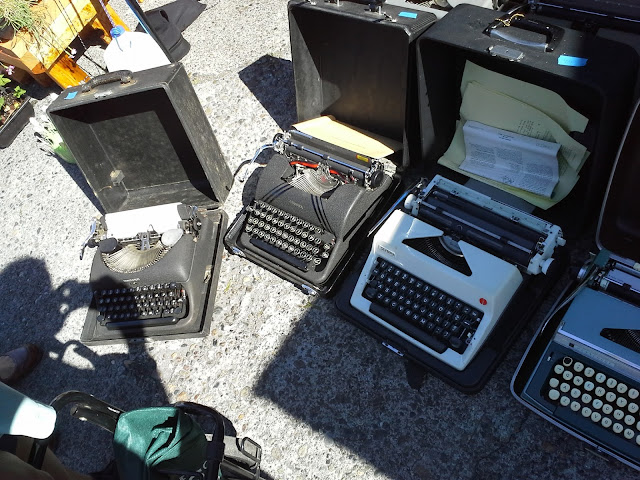 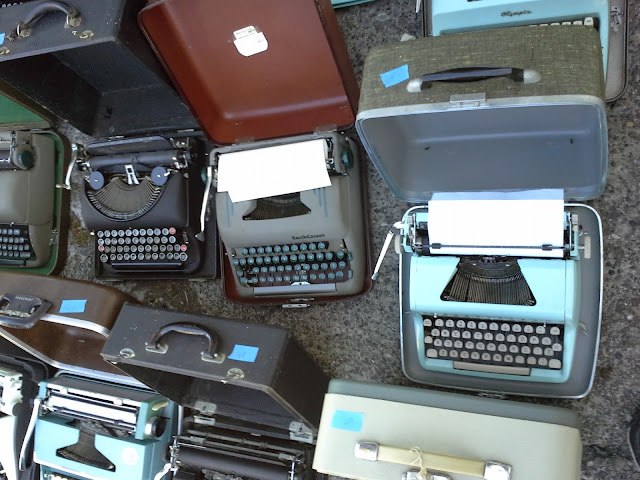 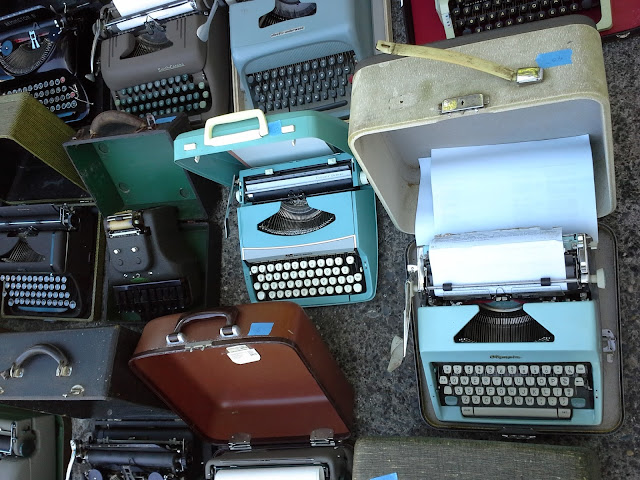 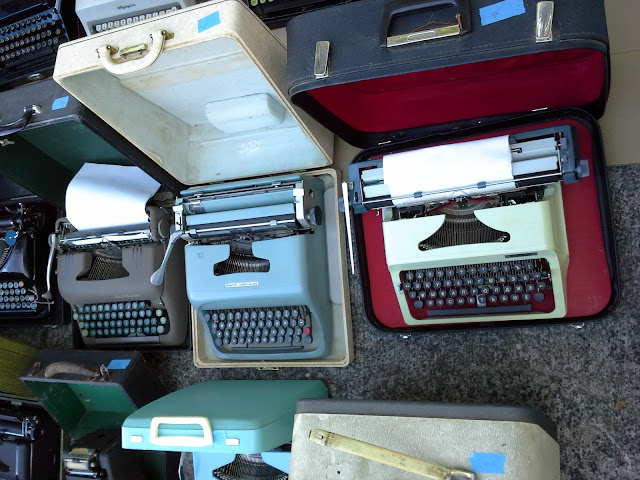 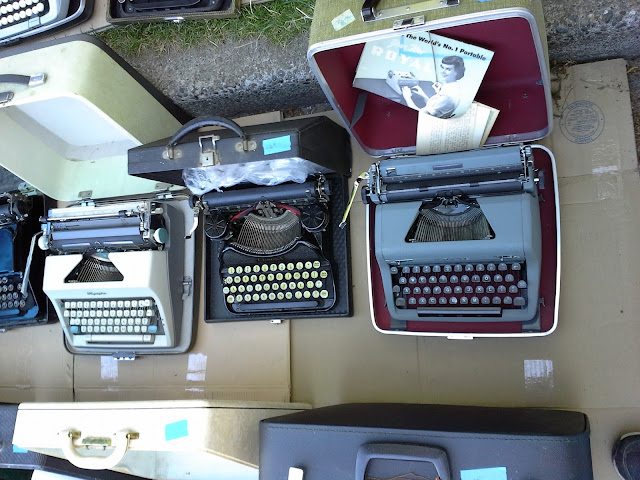 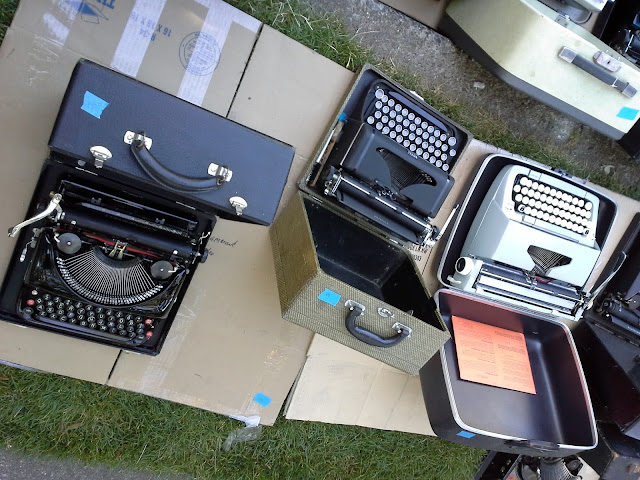 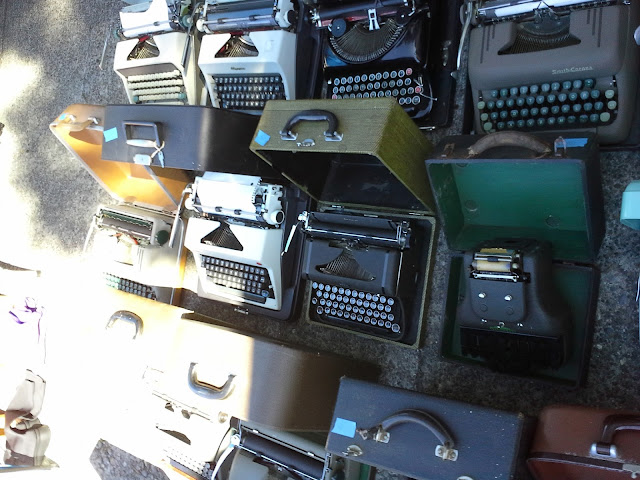 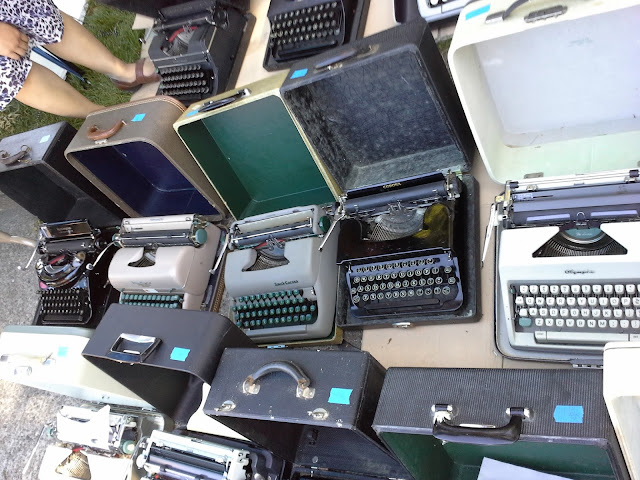 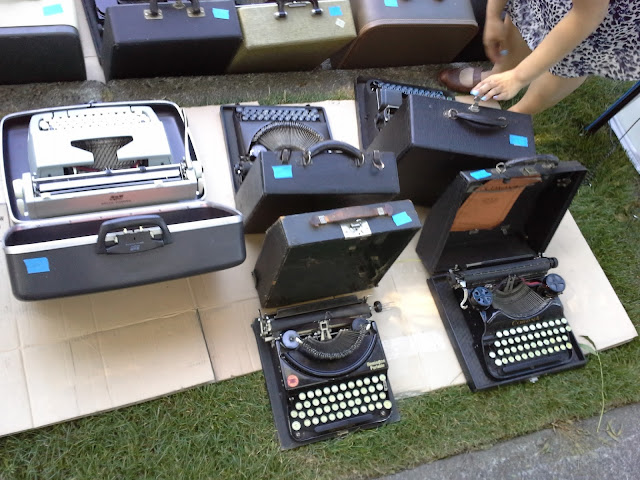 There's this guy who is selling a lot of his typewriters, there every other week. (First week's photos are above. I bought two--see if you can guess which!) The first time I went, he had, for the most part, rather reasonable prices. The second time I went, the prices were increased overall, sometimes significantly. There were a couple that caught my eye, but I decided against buying any because none had the right balance of price vs. interestingness vs. condition. There were plenty of special typefaces, script and techno mostly. But I have typewriters with both of those, so I don't want any more.

I'm showing photos of both the first week and the second week, and you can see some didn't sell the first week. Counterintuitively, some of them had significantly higher prices the second time around. 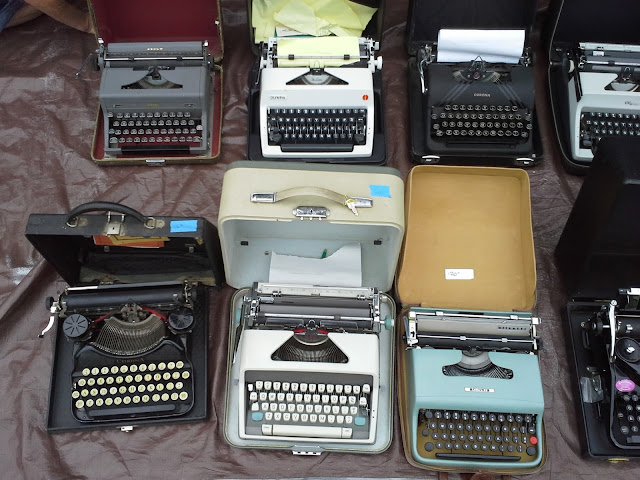 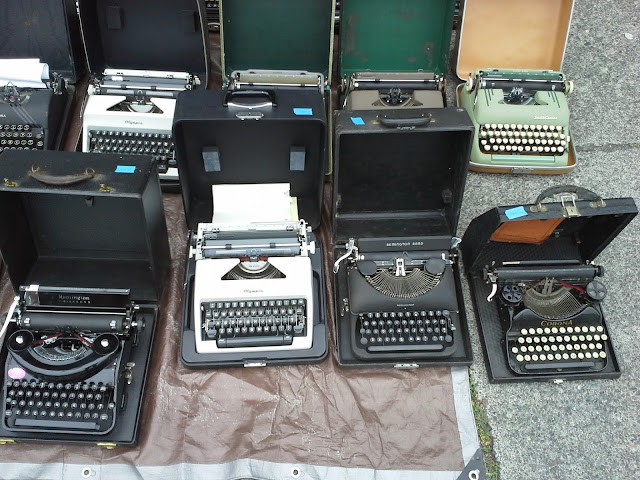 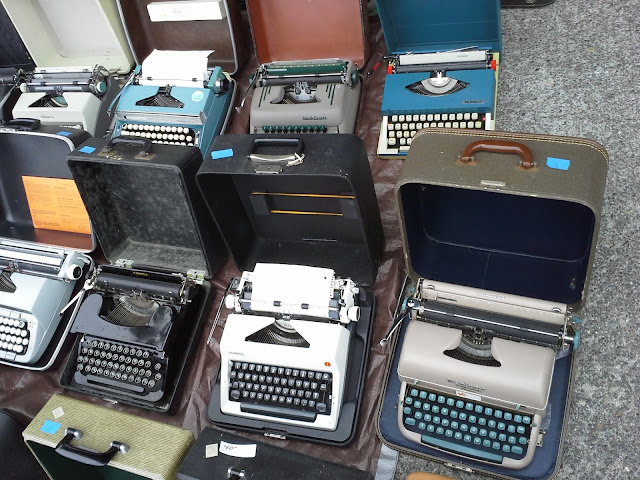 I did, however, get to try out two Everest K2s! One was absolutely horrible, and missing it's ribbon cover. (He later withdrew it from sale because apparently he had the ribbon cover at home) The other was quite nice though not superb. I would have bought the nicer one, glossy burgundy, had it been in better condition, but it had some chips of paint off the ribbon cover and the E in Everest was missing it's little curlicue. The price was $100. If it had not had those cosmetic faults, I would have paid $80 top. I definitely want one now, but I am going to have to try it out first before buying to make sure it isn't one of "those" Everests. 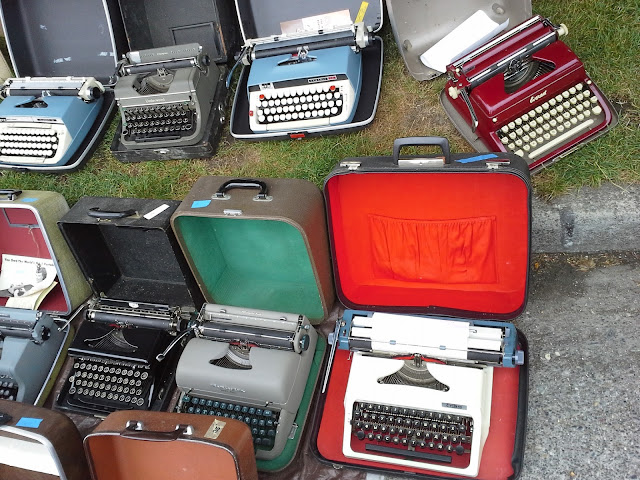 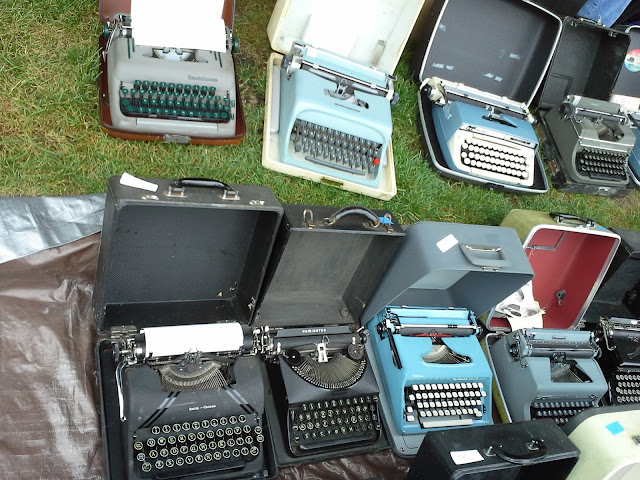 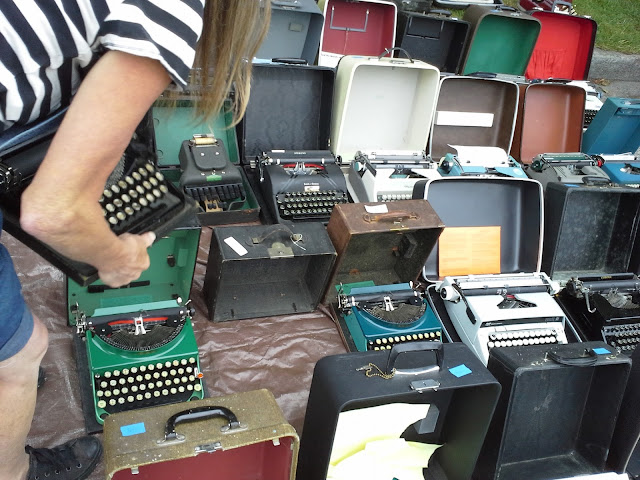 After the lack of luck the second week, I checked out the rest of the market. I was even more glad that I didn't find anything because of what I saw next! Stay tuned to find out which of these four beauties (seen directly below) found a new home with me. I took type samples of some of the typewriters I saw, and I've blurred out places that are a bit revealing things that are supposed to be surprises. 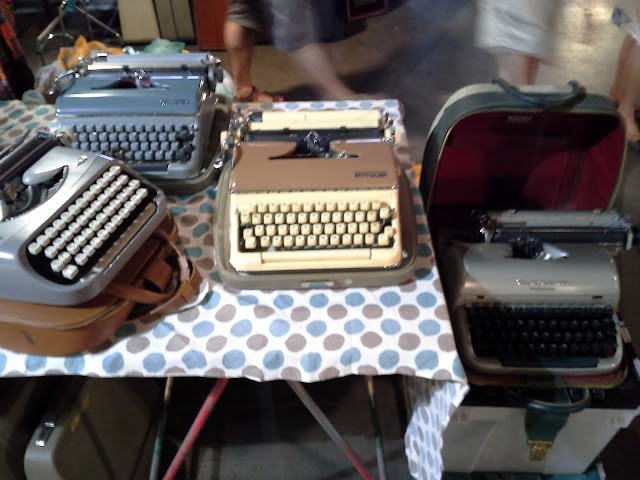 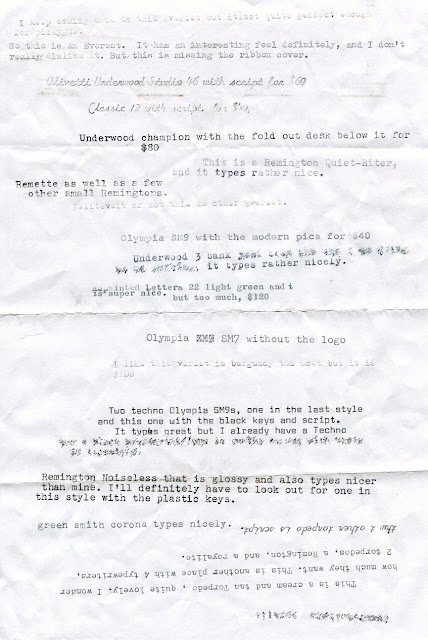 The horrible shadow over the whole affair was that at some point when I was carrying the find back to my car, my wallet got lost. I drove home (45 minutes away) before I noticed the loss, and I spent the rest of the afternoon frantically searching, driving back, waiting for lost and found to open from their 2 hour break, and finding out that it's probably gone for good.

When I was waiting for lost and found to open back up, I popped into the Fremont Vintage Market which was swarming with 8 or so typewriters. All were below $60 except for one, a Royal standard. Fremont, the supposed centre of the universe, definitely is a major node for typewriters. The Sears Achiever was a surprisingly nice typewriter, and I would like one some day. I think it's by Brother. The Olympia looks pretty in the photo, and it was only $55, but it sadly had a lot of rust behind the SM3 instruction manual in the platen. (It was obviously placed there to hide it so I moved it out of the way in case if somebody bought it without checking!) 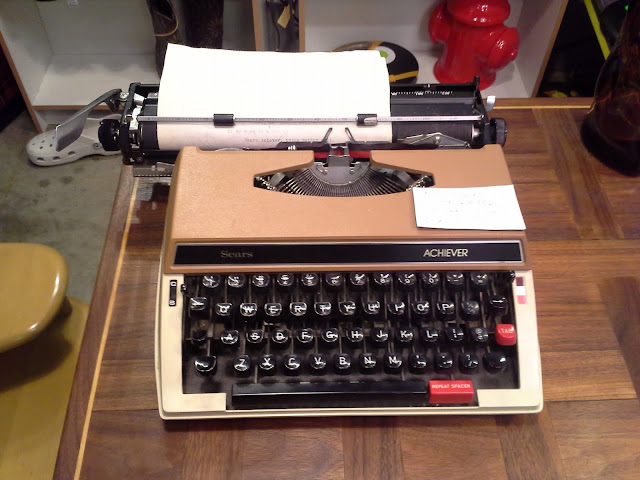 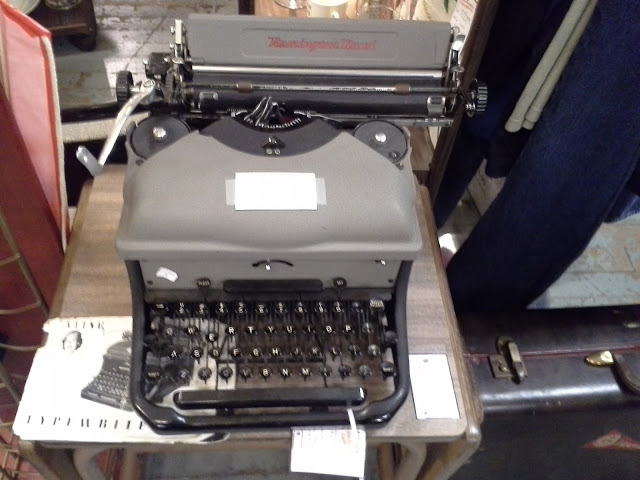 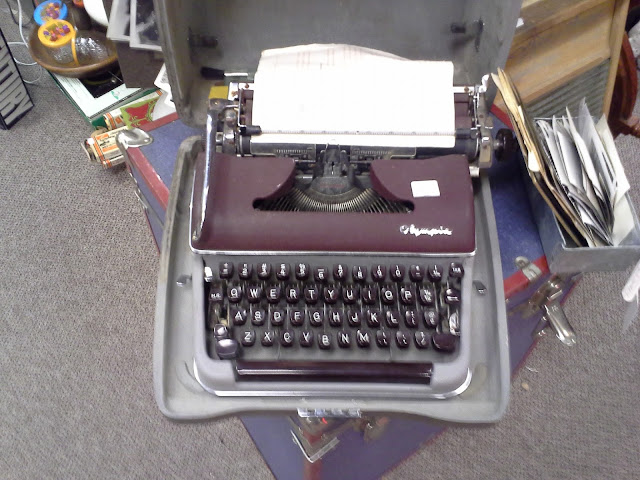 So tons of typewriters, and though the day (and admittedly the rest of the week) is tarnished by the wallet incident, it wasn't that bad. The only true loss is the $43 and the actual wallet. The cards and my license can all be replaced.

If anybody out there wants a $40 Olympia SM9 with a special typeface, let me know. If there are any left (chances are, yes) next time I go, I could snag one for you. I'll make sure everything works and it looks nicely, too. You'd have to pay the $40 plus the shipping from Washington, of course.
Posted by x over it at 01:11