The Olympia factory was originally located in Erfurt, in what became the Soviet zone of Germany. Production was moved to Wilhelmshaven under the temporary name Orbis in 1948, while production continued in Erfurt and was taken over by Optima. The rights to the Olympia name weren't decided in favor of the Wilhelmshaven organization until over 10,000 of these Orbis machines were produced.


The earliest Orbis is essentially a pre-war Olympia portable with crinkle paint.

Then a chrome stripe was added to the front and the levers became tipped with white plastic. 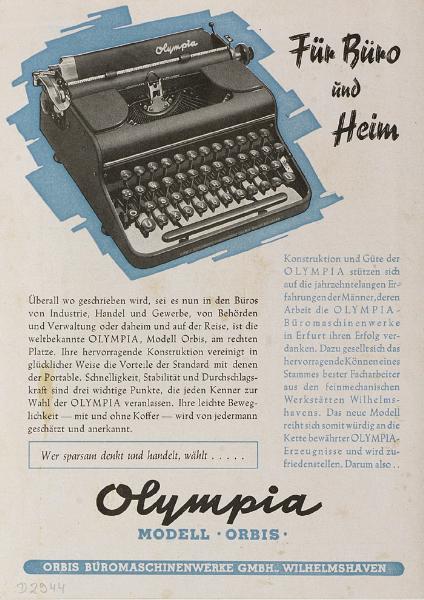 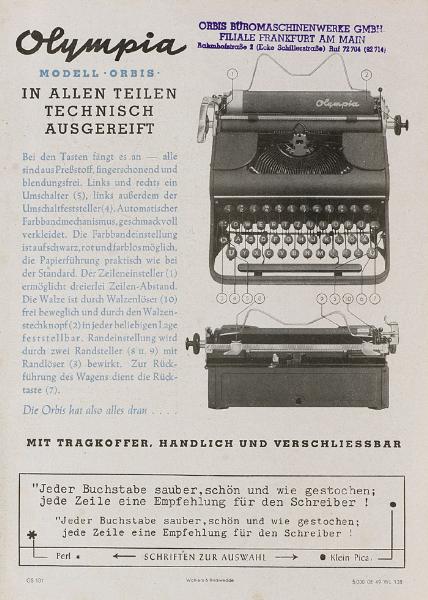 Chrome stripes were added to sides, along with thicker keytops and different plastic lever tips.


At first the carriage knobs remain black but then they change to match the keytops, which could be either warm brown or dark green. 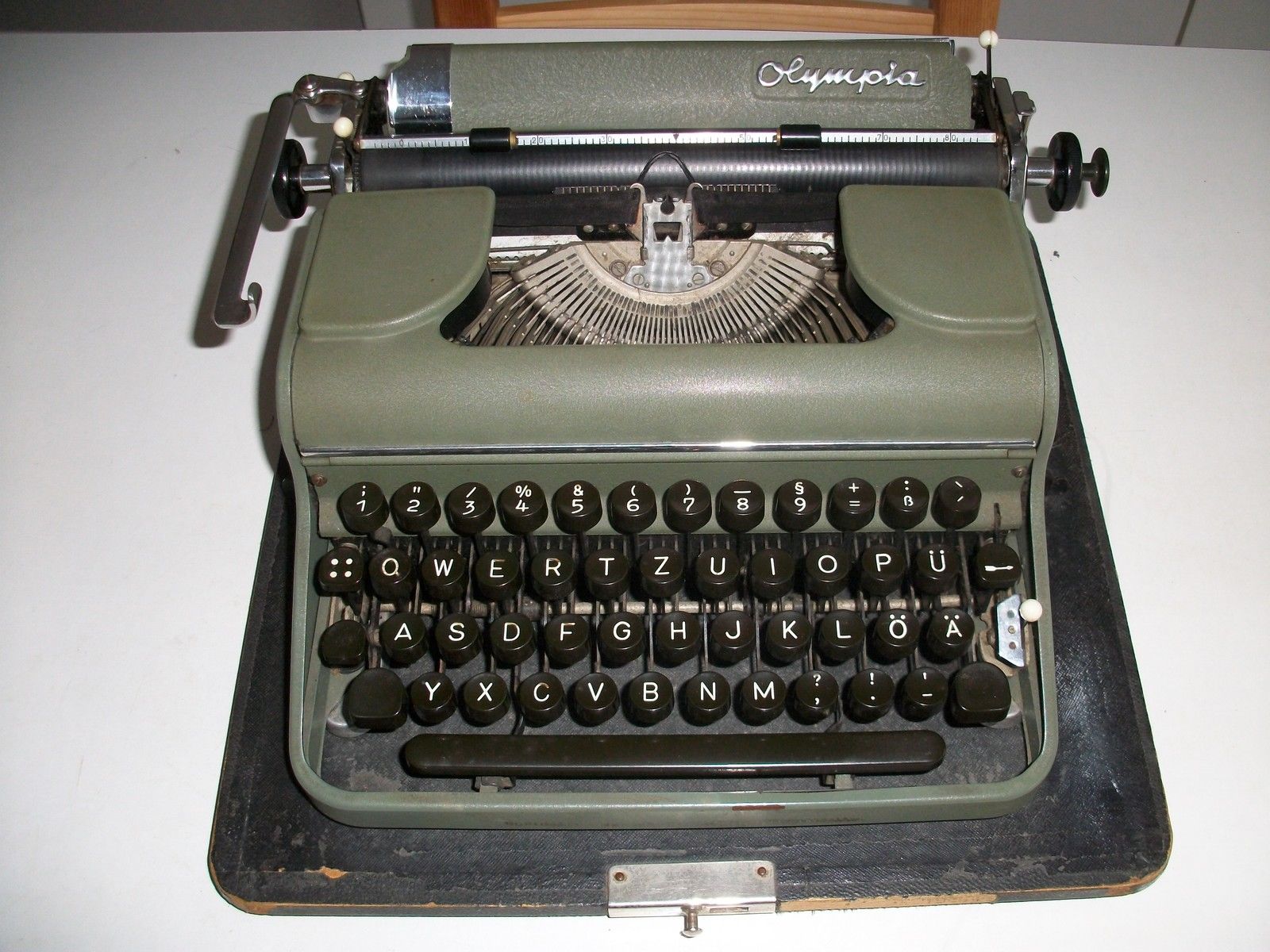 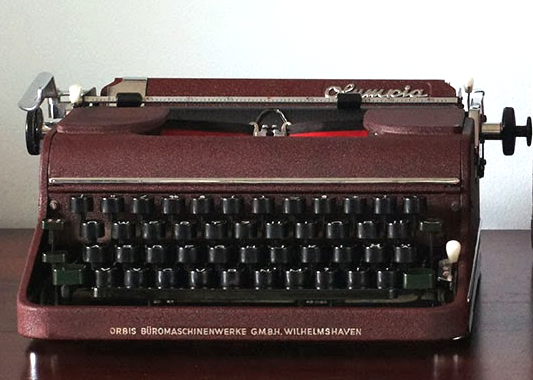 DM was a brand used before WWII on Olympias and the use continued after the war. I don't know if this also has an Olympia emblem on the paper table or if it's only branded DM. 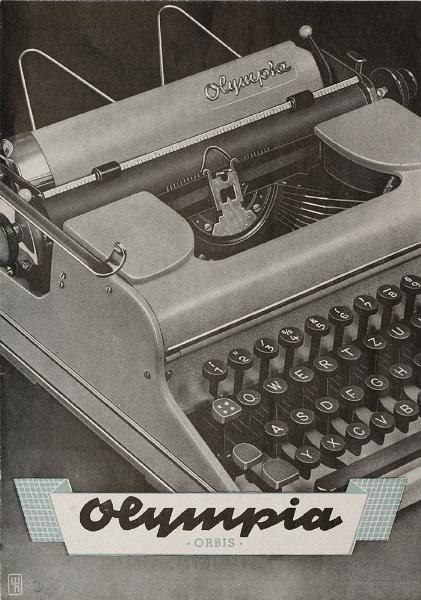 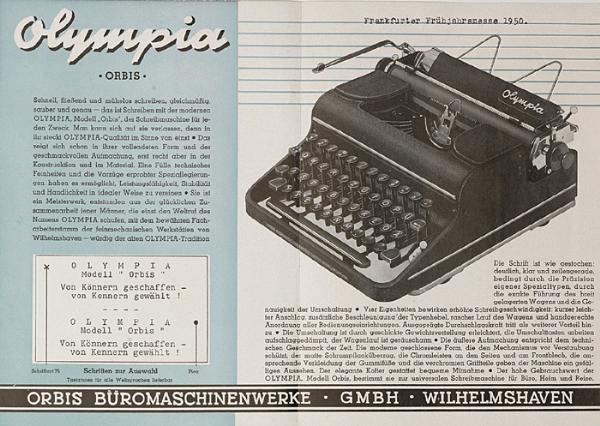 This would be the final version of the Olympia portable before it officially becomes the SM, now known as SM1. It has the same thicker keys as before, but the new carriage knobs.

Around serial number 70,000 the SM1 proper, as we think it since it originally didn't have the "1" began. I don't have a photo example right now, but one of the changes is a different style case. Before this, the case had rounded corners as can be seen from the baseboard. The case switched to a more squared case. There is no tabulator

The keys are black and circular, except for the function keys which are dark green and have a tombstone shape. Colors offered include black, green, dark red, and cream. 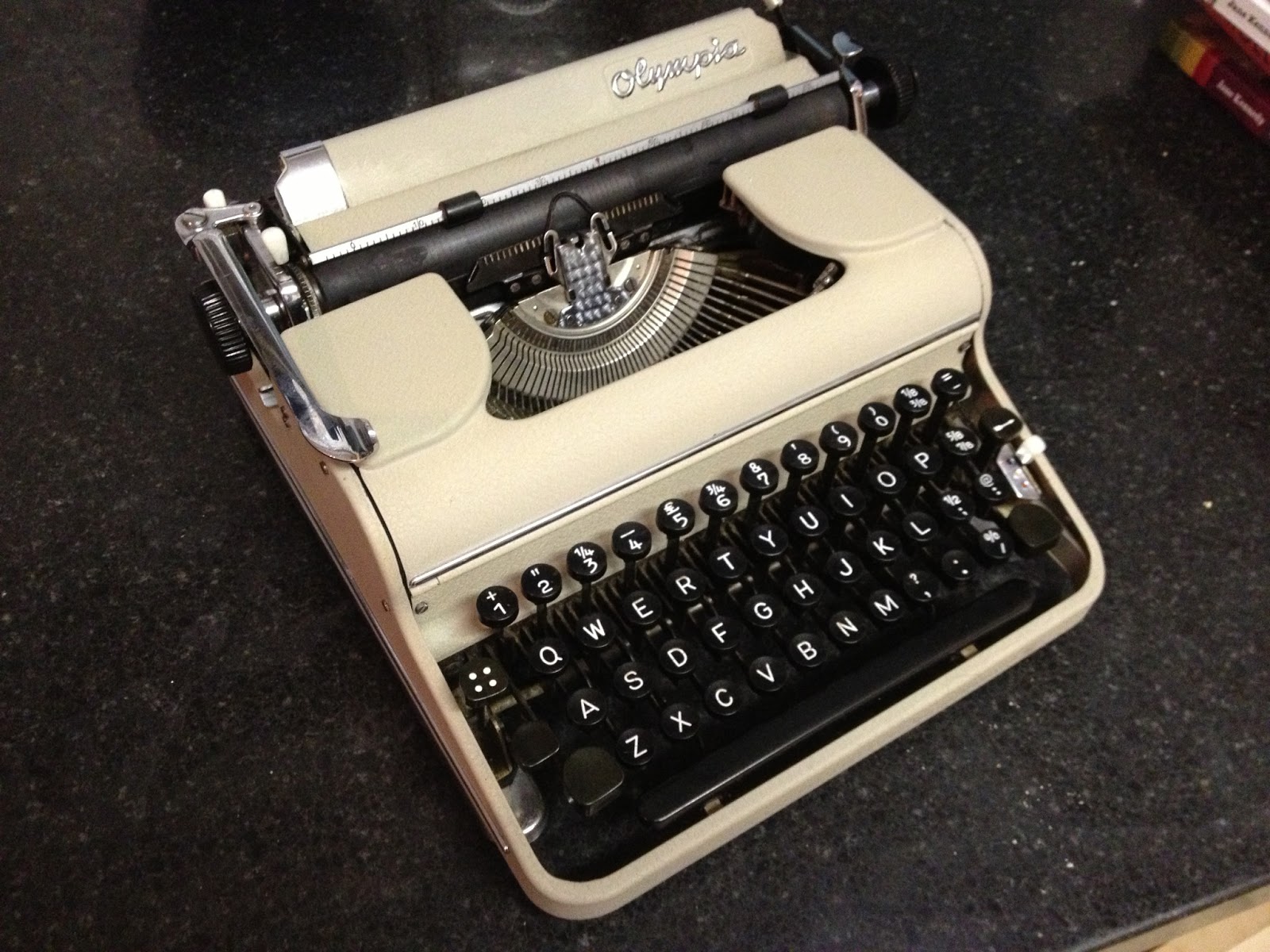 With the SM2 came new keytops and new styling, although the machine inside is largely the same as the SM1 at this time. Early examples have the same round keytops as the SM1. The keytops are usually black, though sometimes with dark green function keys. Crinkle finish colors include olive green, black, and dark red.

In 1952, after serial number 170000, the keytops, now with cushioning, are flipped 180 degrees to resemble the more common 1950s Olympia keys, though the function keys remain the same, and body pieces changed slightly although the styling remained the same. The Olympia logo is now moved to the ribbon cover. The SM2 still has no tabulator and the margin sets are hidden behind the paper table. There is a new return lever. 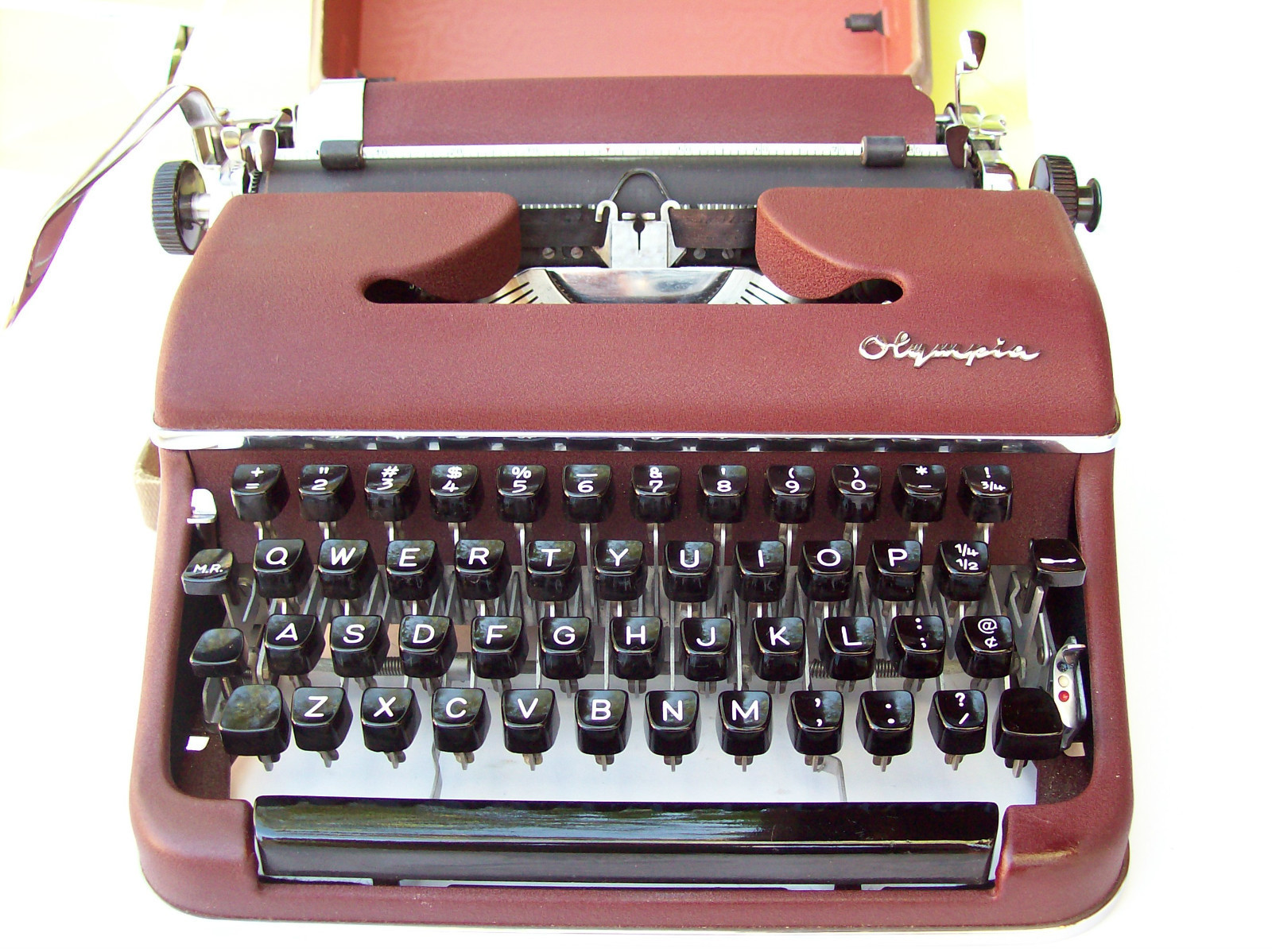 I have seen one with a hammered silver finish. I'm not sure if this is original. 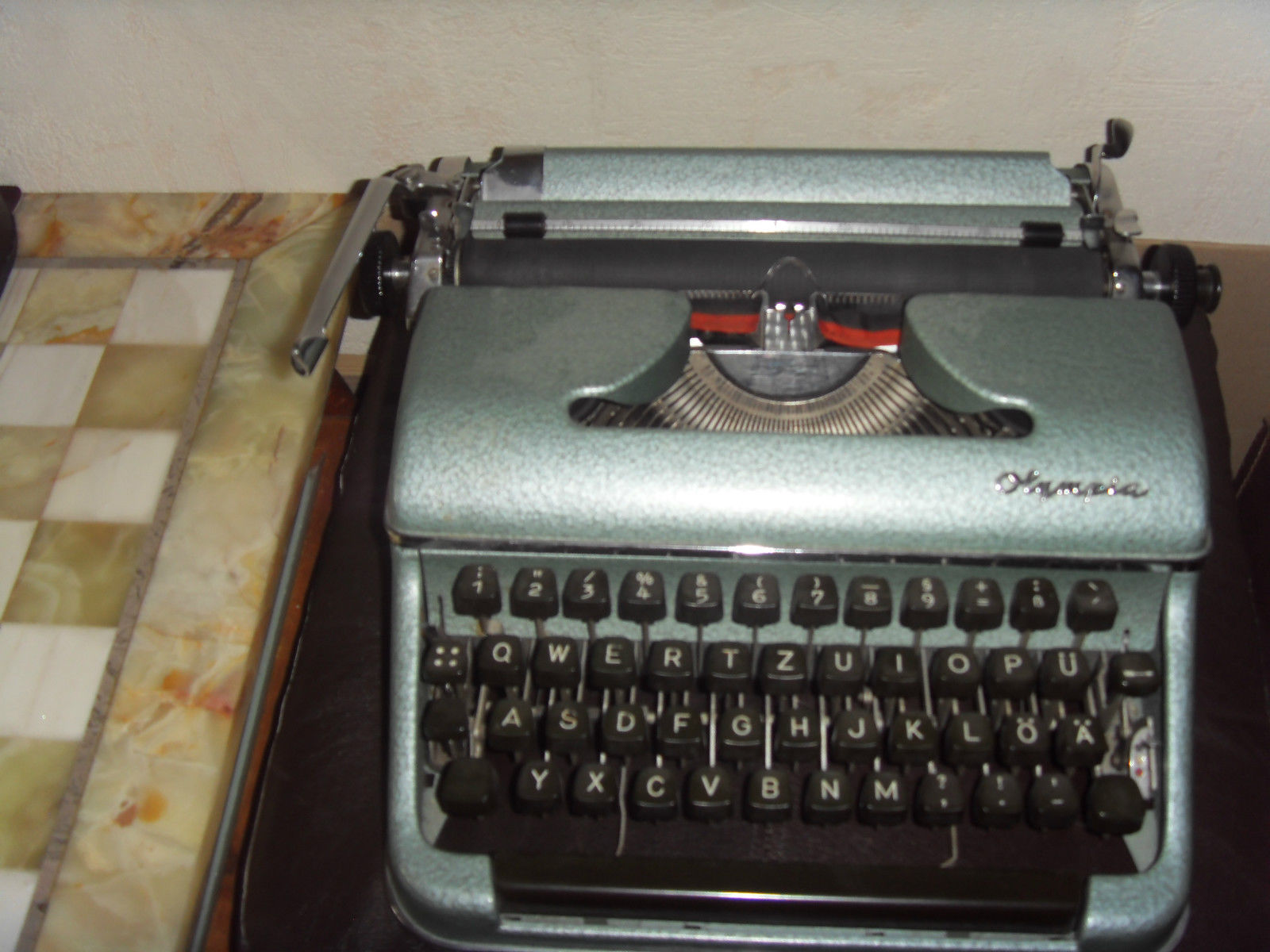 Again, somewhere around serial number 500000 in 1953/54, another change, though slight. The shift keys become larger.

This lovely version with dark red keys and cream paint was made. Also a light green glossy one with black keys. 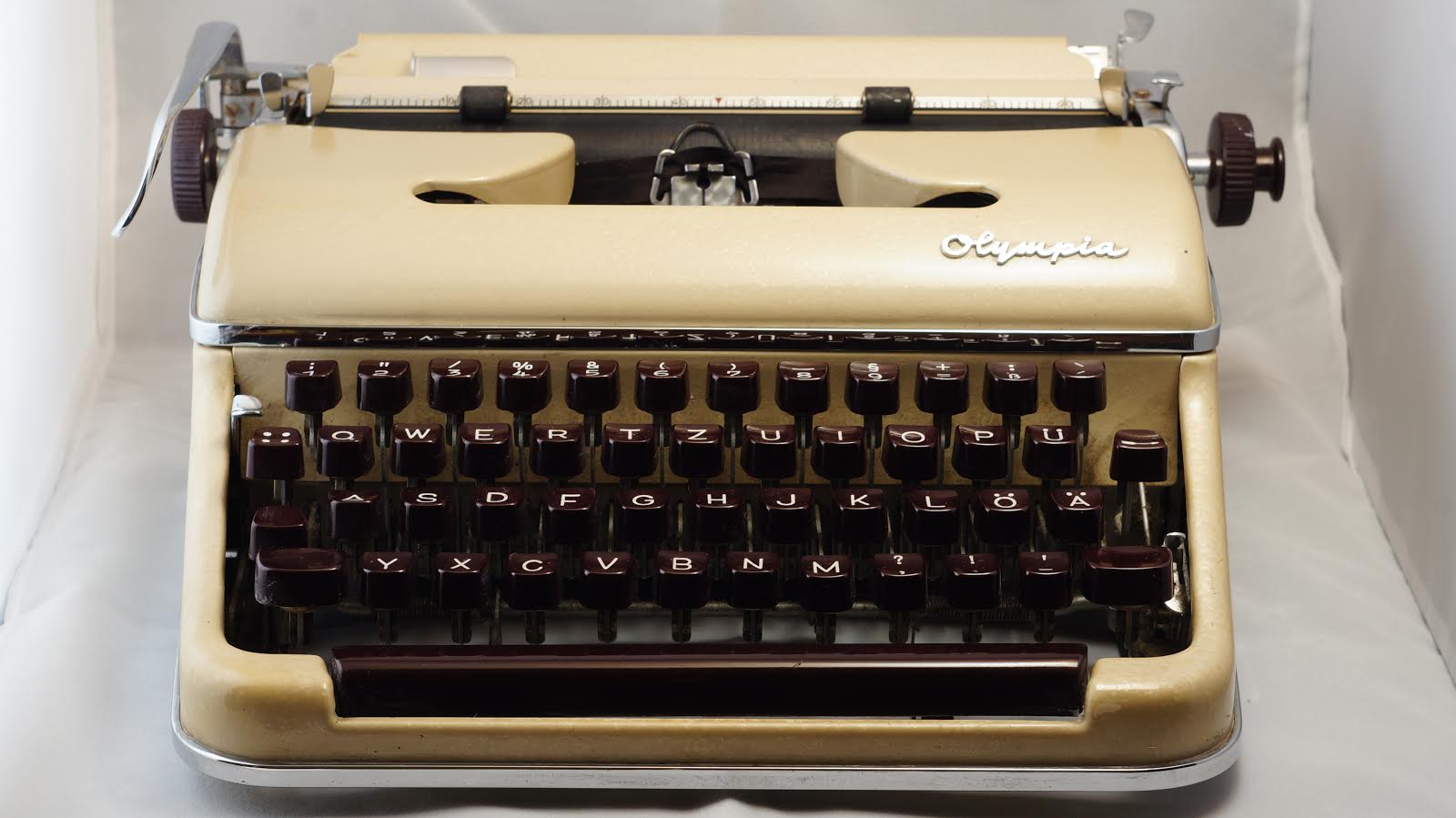 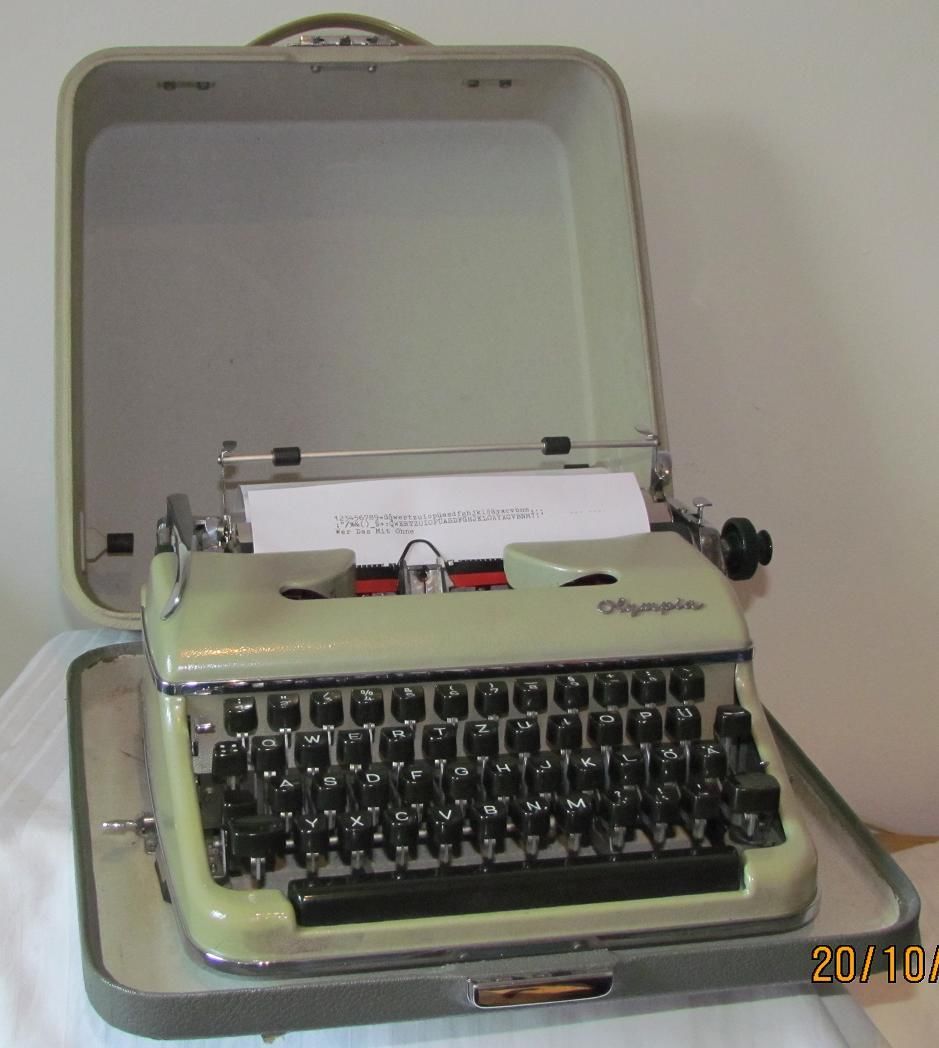 The SM3 has a tabulator with manual stops. The margin sets are moved to the top of the carriage with the tab stops under on the back. It usually has De Luxe written on the segment.

The first version of the SM3 was produced only for a short time in 1953 and possibly early 1954. It has the smaller shift key of the 1952 SM2 and slightly different plastic card holders angled to fit around the wire card holder. 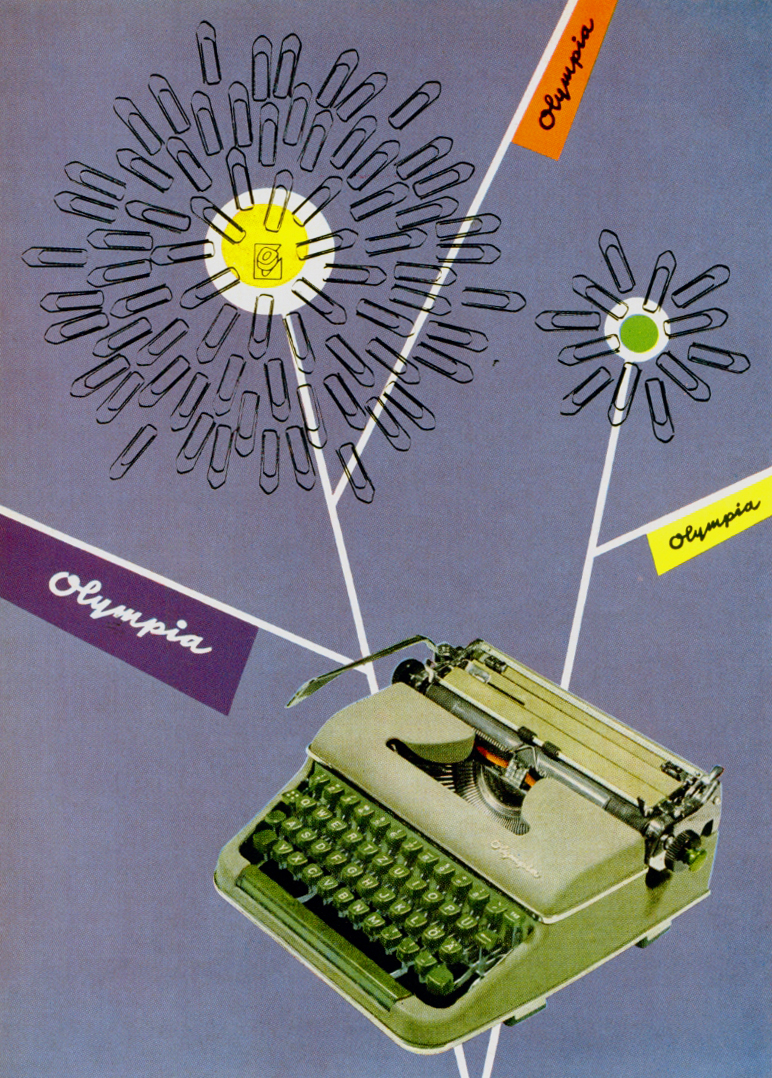 In 1954, the SM3 got different plastic card holders and the newer, bigger shift keys. This is by far the most common SM2/SM3 model version found in the US. They almost always have a silver-painted streamlined wood case, especially the pre-1958 ones.

The SM3 was produced in this form up until 1961 undergoing only very minor changes in the finishes to different metal parts. Many different paint (mostly crinkle but some glossy) and key color combinations were offered.


A wide carriage version was produced and had a boxy case instead of rounded. 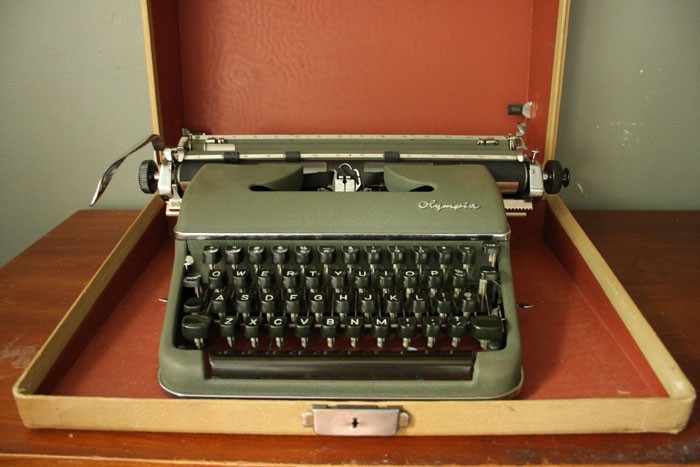 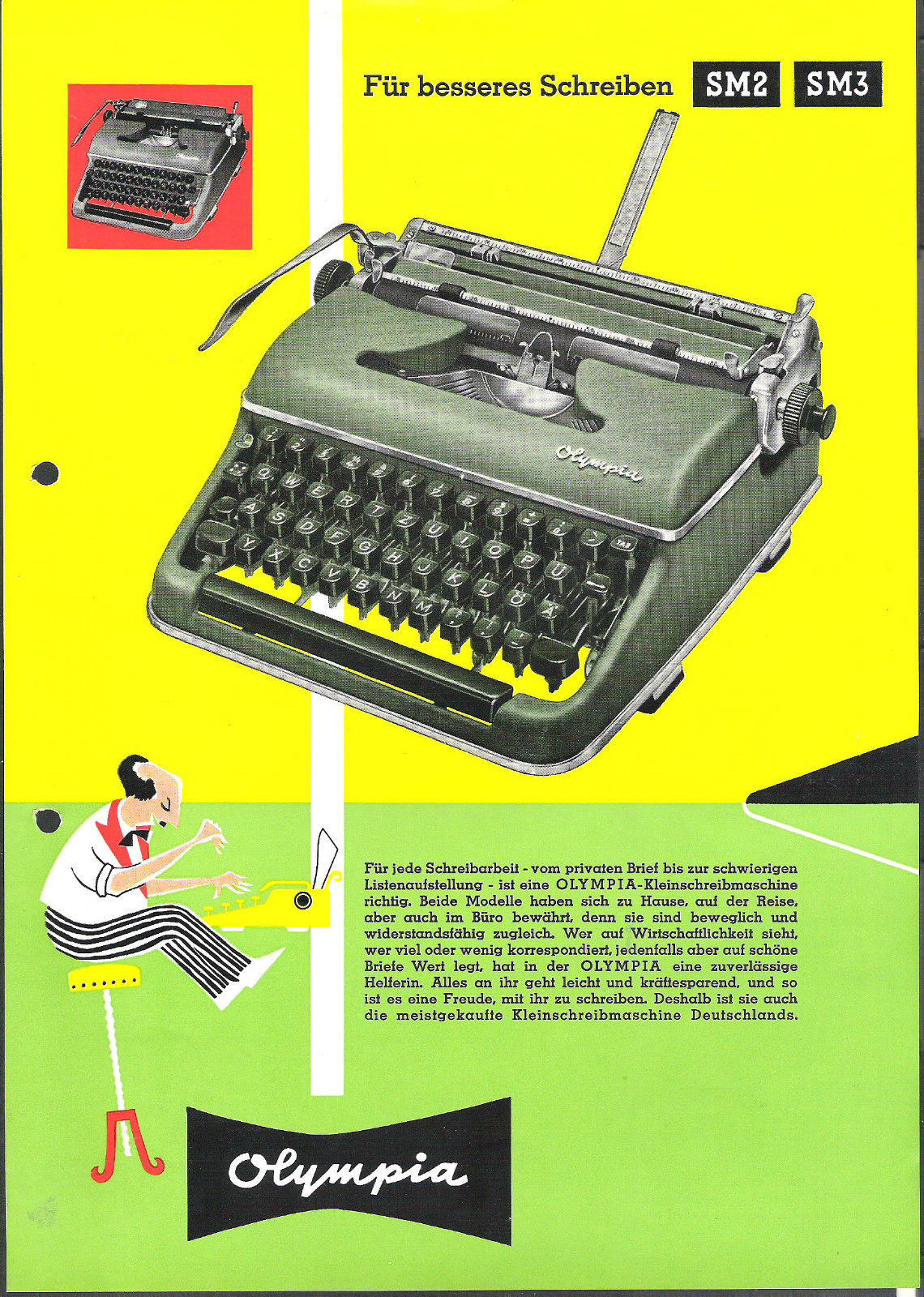 In 1958, Olympia introduced the SM4. This was an improved version of the SM3 with a keyset tabulator. I find it odd that it took Olympia so long to introduce the SM4, as they'd had keyset tabulators beside the space bar in their 1930s models.

These were produced in a number of colors until 1961, ending when the SM3 ended. Most have a squared-off case with grey and white stripes, although some have the silver streamlined case. 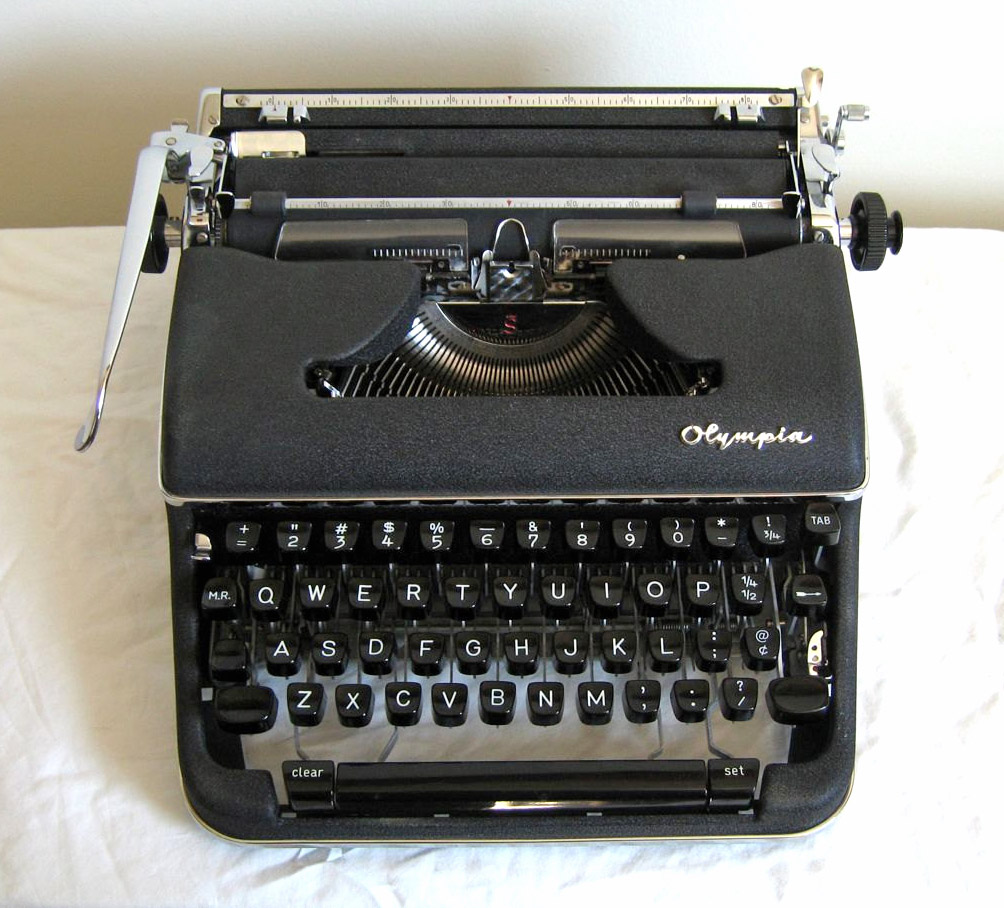 As with the SM3, a wide carriage version was produced. 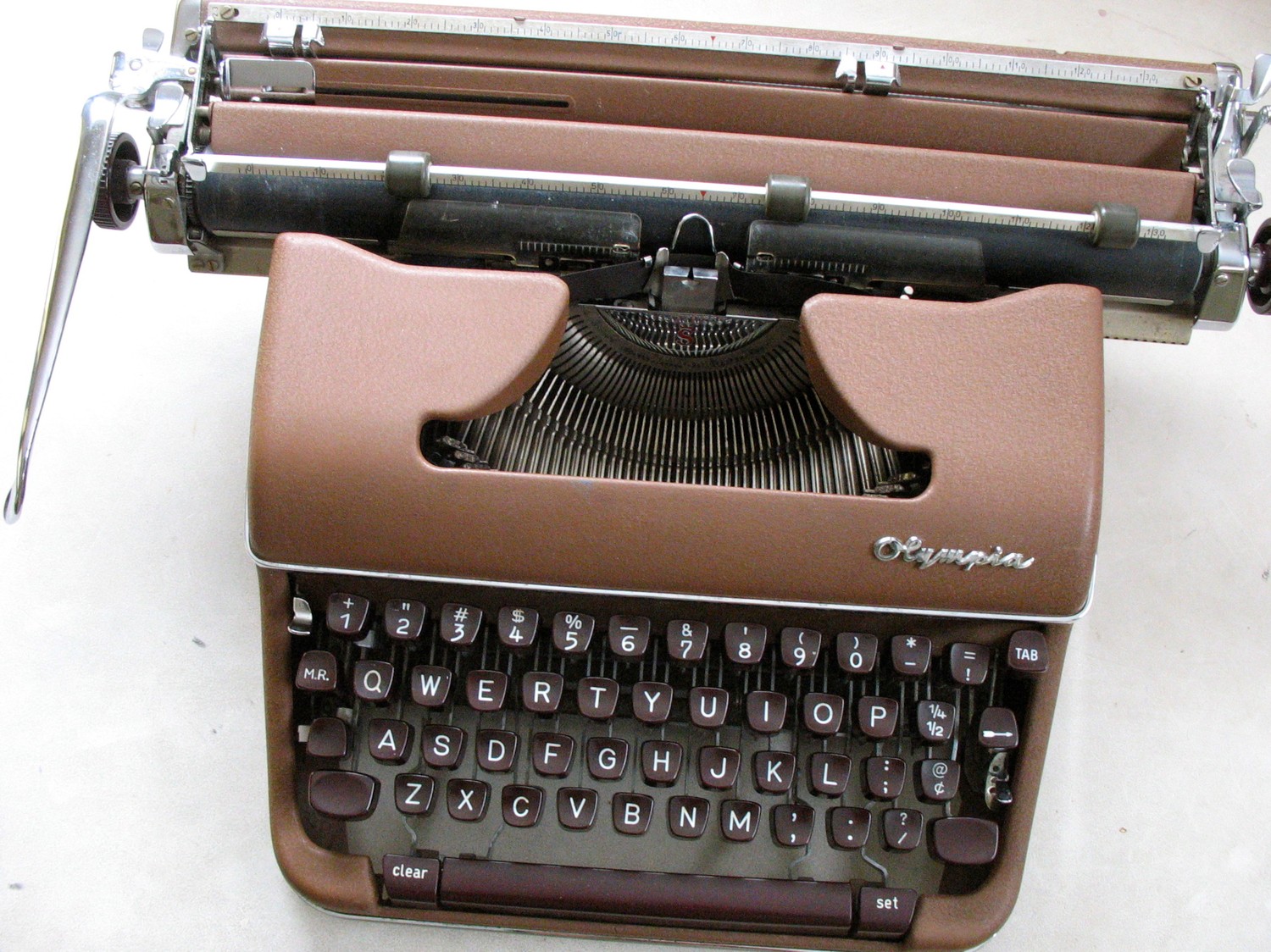 Most had a crinkle paint finish, but occasionally they had an eggshell finish. 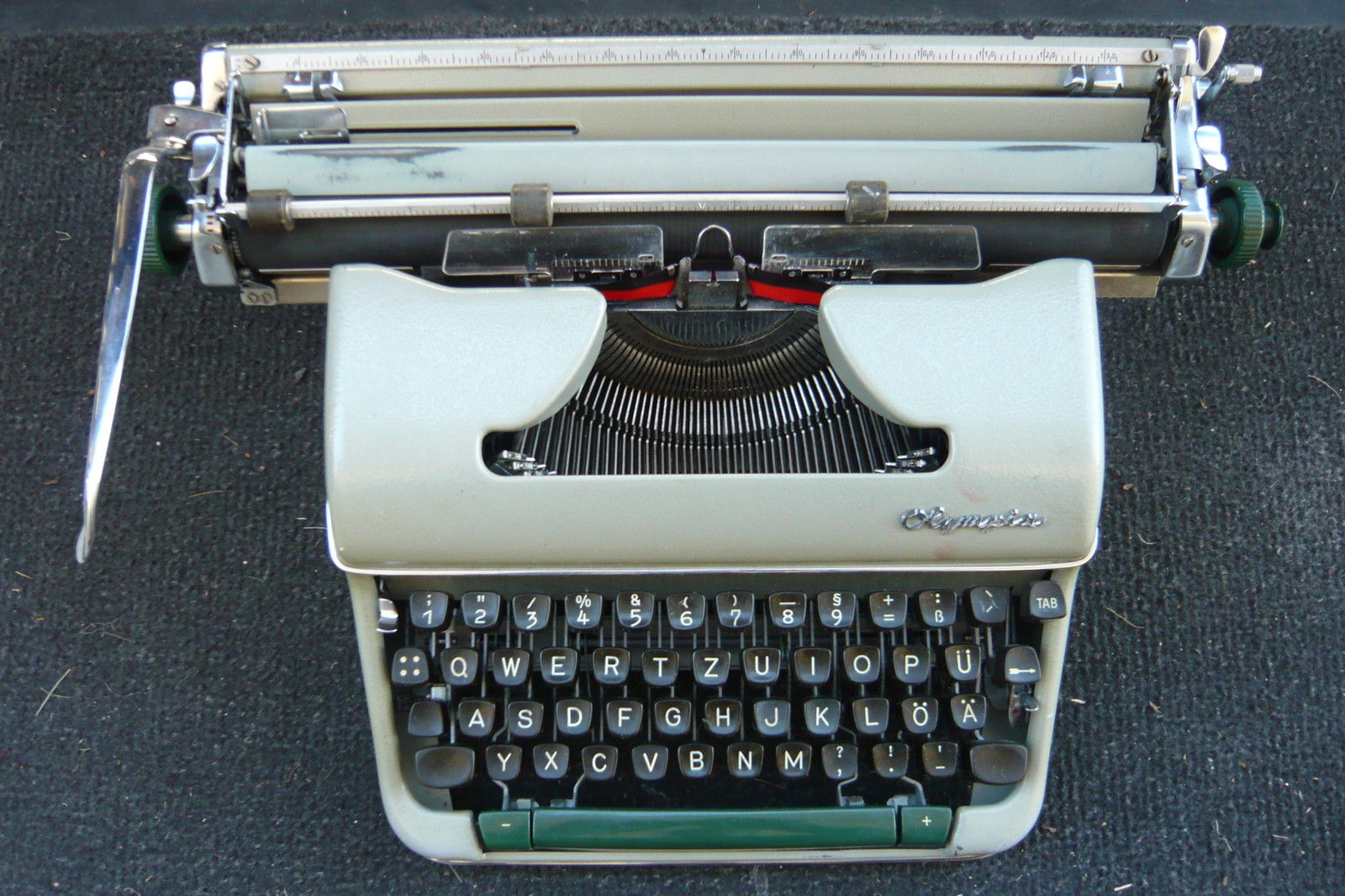 A special gold-plated edition was made. 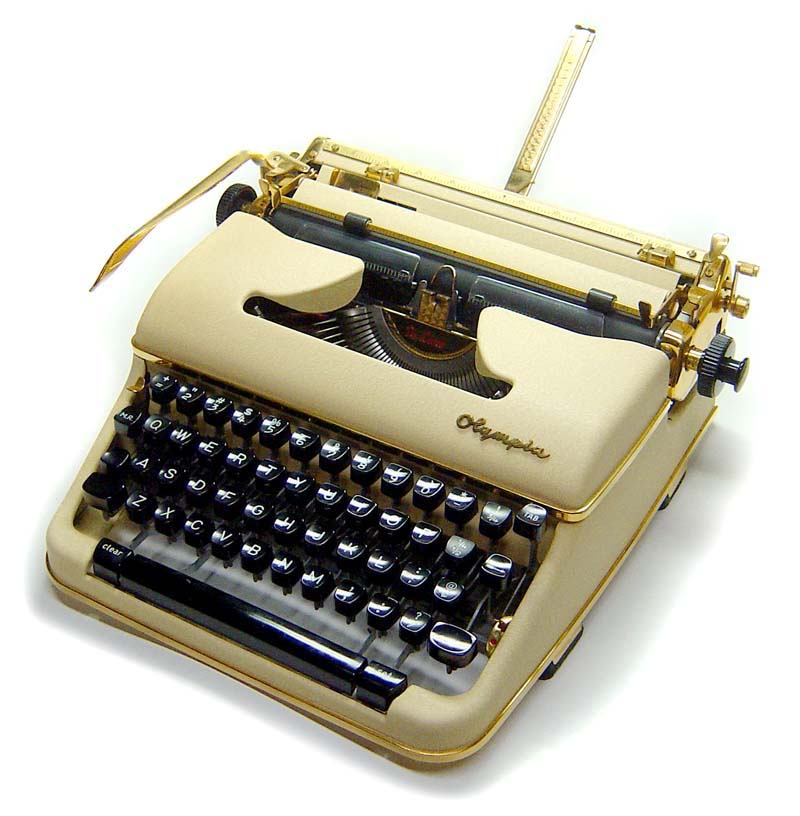 In 1962, the SM7 was introduced. It's pretty much the same as the SM4 inside, having a keyset tabulator, but with a modernized angular body. It was produced in 3 colors; white, pink, and blue. Some have a "Made in Western Germany" badge below the Olympia logo but most don't.

The SM7s with pink or blue bodies as a rule have all-white keys and knobs, while the white-painted ones have turquoise shift keys and knobs. They all have a squared-off case with grey and white stripes.

The first change to the SM7 is adding the grid textured finish of the front panel to the areas on each side of the space bar, where it was previously smooth. This happened at about serial number 2000000.

After 2080000, the style of carriage knobs changed from the more angular form to something more curved. 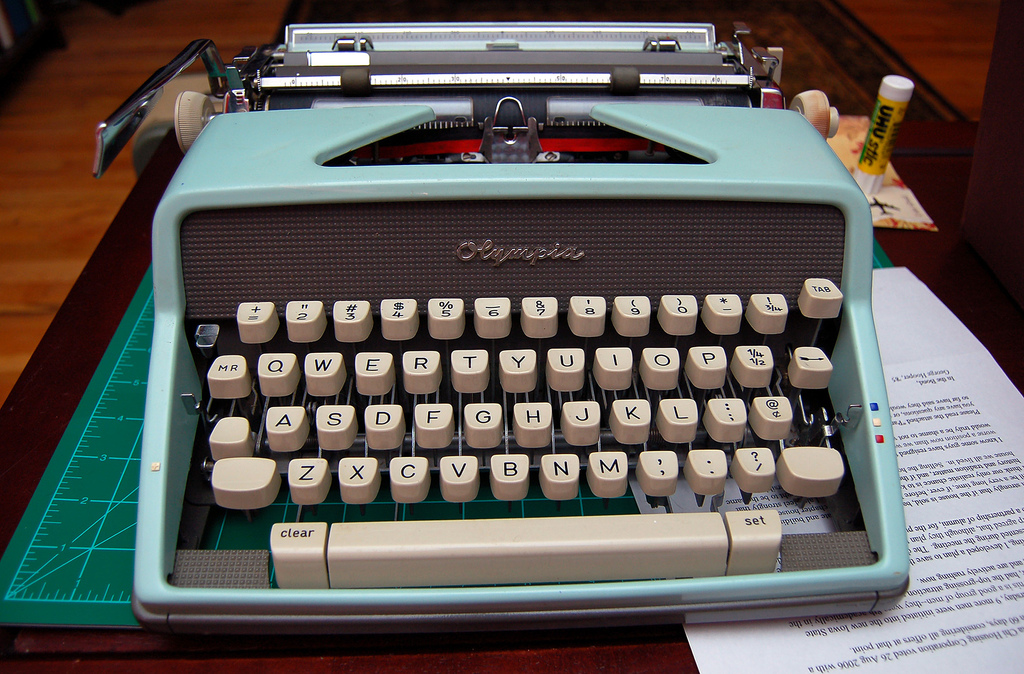 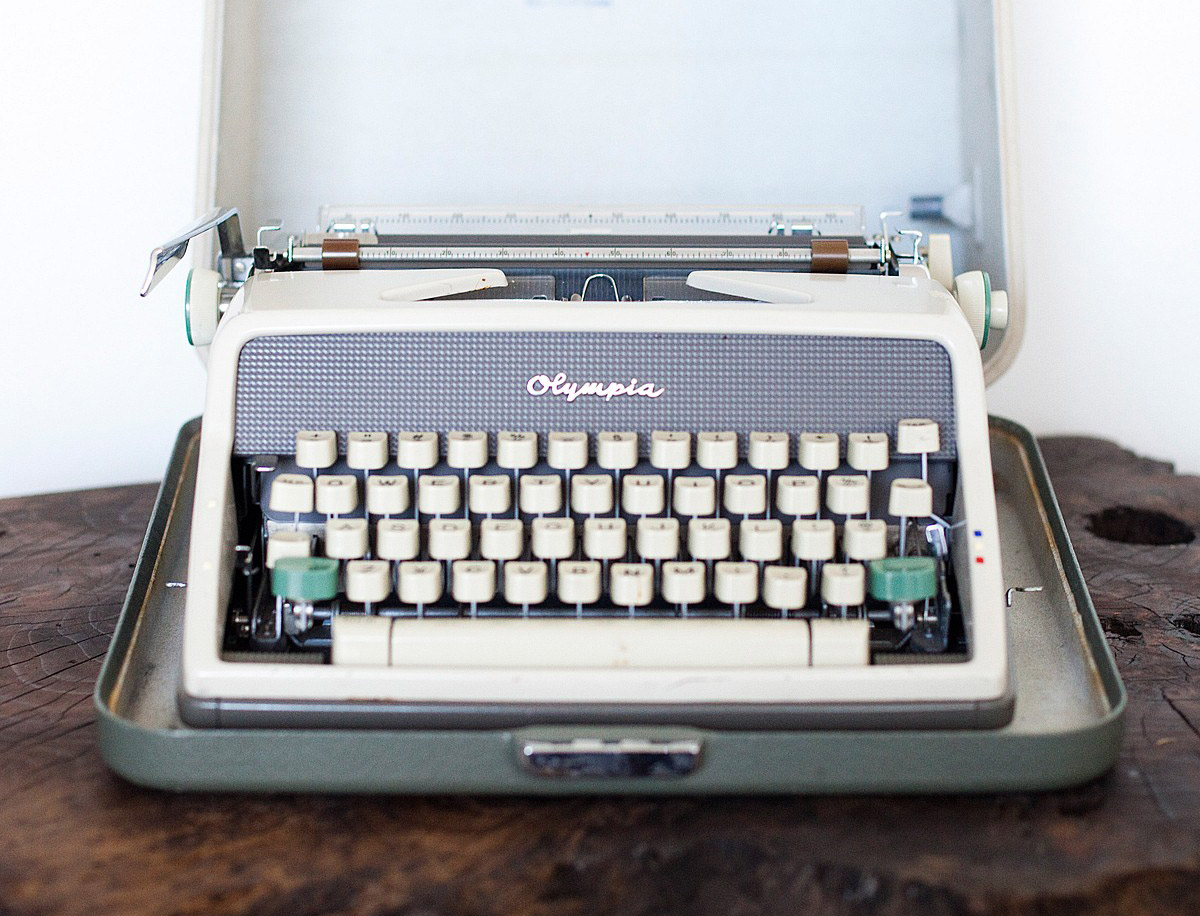 Introduced at the same time as the SM7, the SM5 was a less-expensive option. It's like a cross between an SM2 and an SM3, having the SM2 style paper table, but with a manual-set tabulator. It was pretty much produced in just one variation. 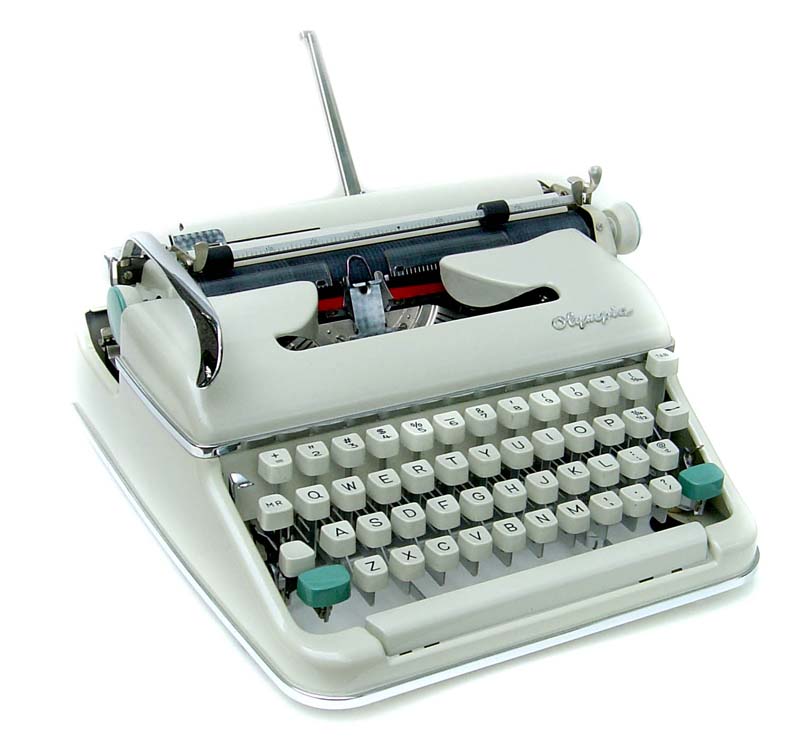 The Monica was a stripped-down model that began in 1960 and continued until the end of Olympia production in Germany, spanning a number of body styles. The first Monica was similar to the SM2, but without a chrome stripe around the base of the machine, with different, simpler rubber feet, and less liberal use of chrome finishing. The eraser table is also lacking.

All Monicas have an eggshell or textured glossy finish in an off-white color.

Monica can also be found in Germany spelled "Monika" although the Monica version is more common there. 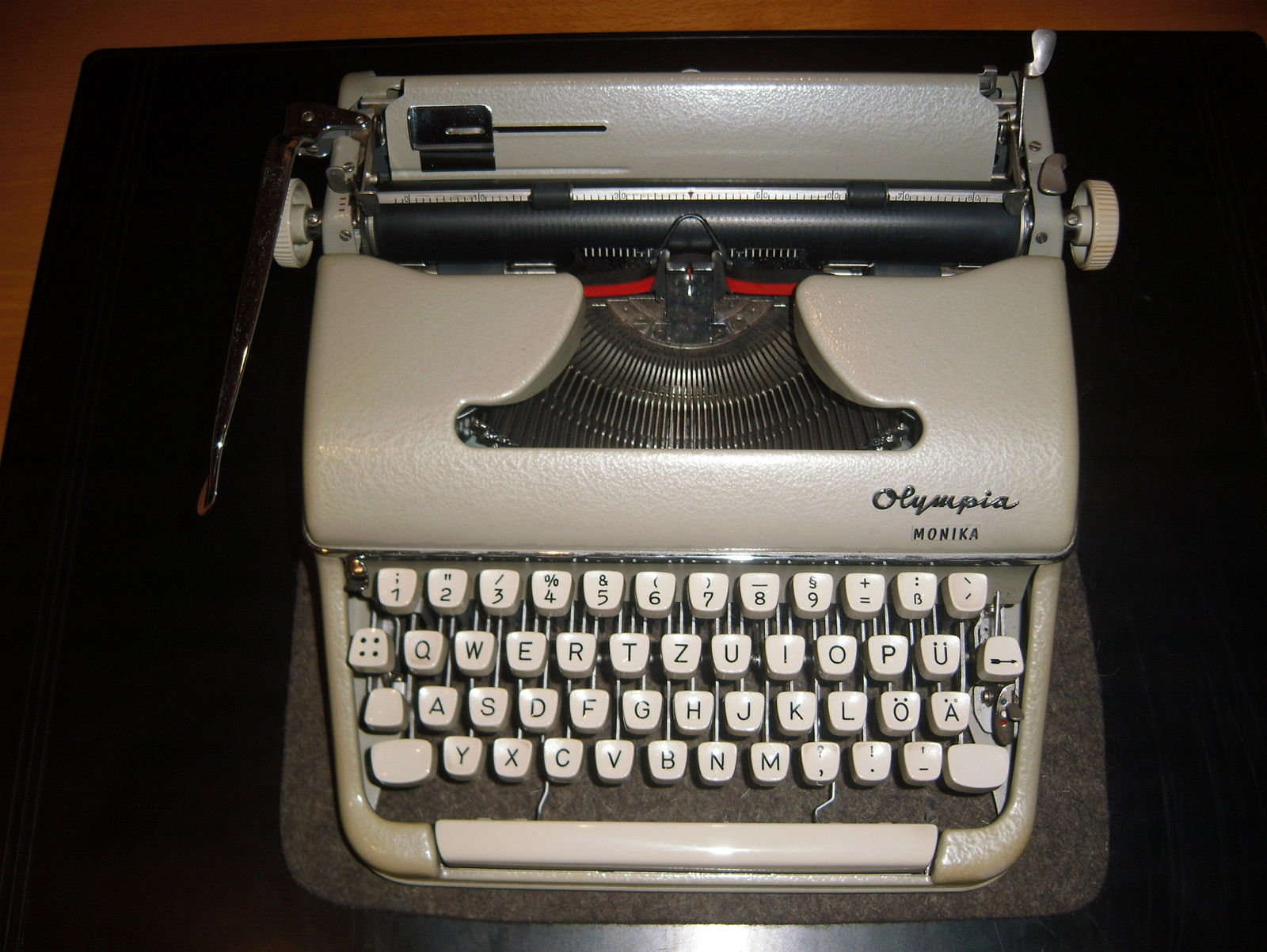 After 1962, the Monica strongly resembled an SM5, but with a less deluxe finish and no tabulator. The Olympia logo at this point was usually turquoise plastic to match the shift keys and carriage knobs. 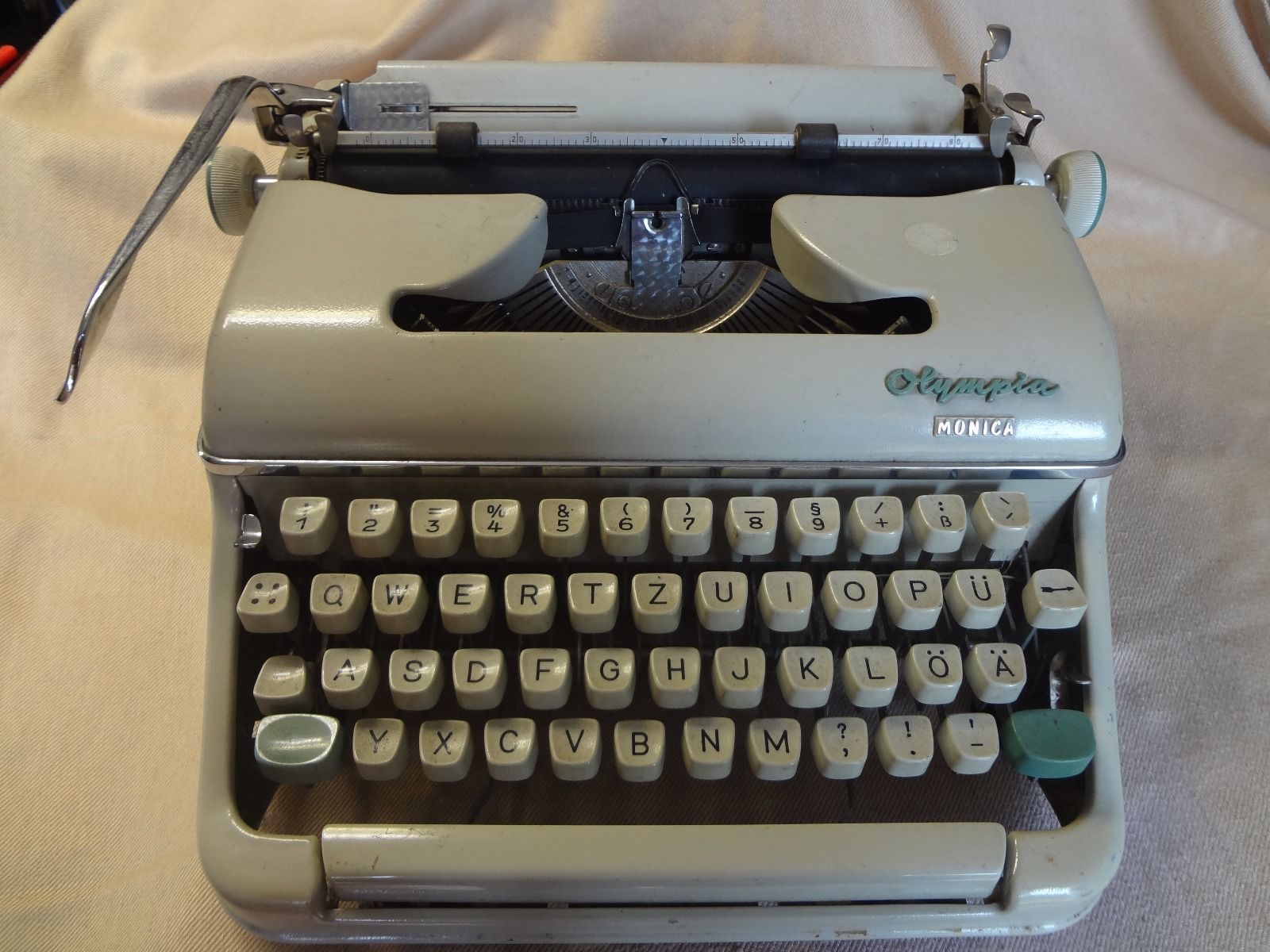 This style of Monica ended in 1964, although the line did not end with the end of the carriage-shift Olympia SM portables.

After the introduction of the proper SM1 in 1949, there were very few anomalies or rebrandings. The DM-branded Olympias were already mentioned in the text, but this example deserves its own space. I'm not sure what the background behind the "Colortip" machines is, but originally, they were introduced around 1962 and have a boxy ribbon cover unlike any other Olympias. The rest of the machine seems to be a mix between SM3, SM5, and Monica.